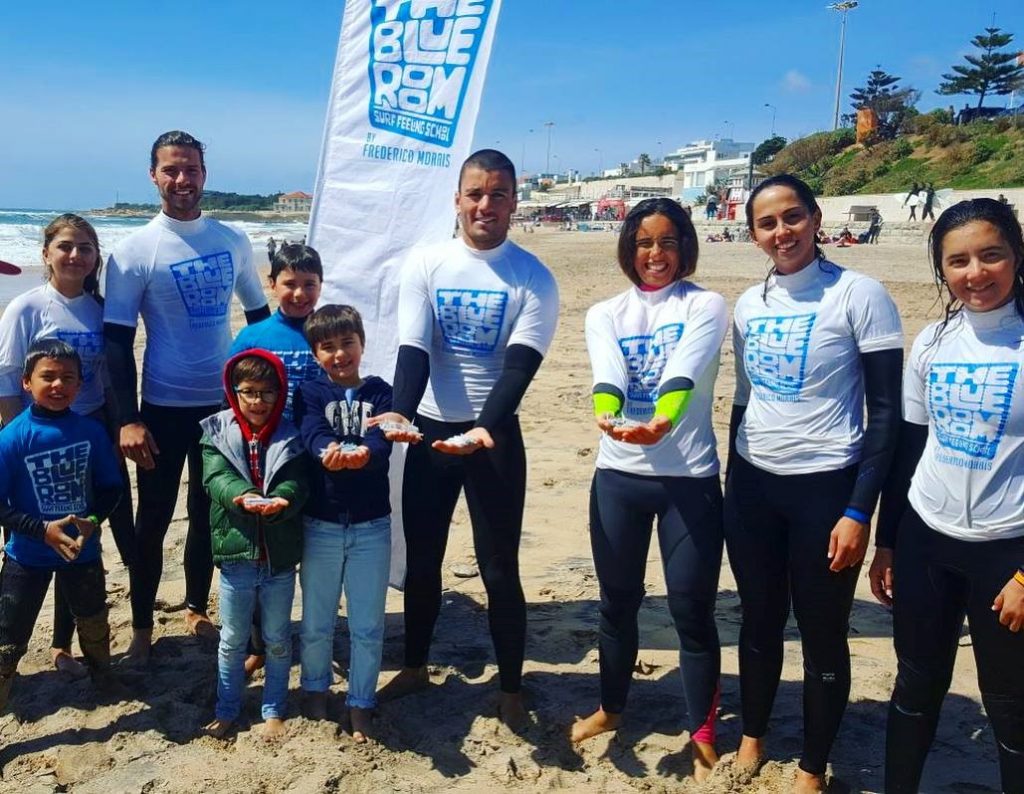 Nowadays, plastic is one of the main types of marine debris that you hear about. In many places, plastic is the type of debris that you will see as you walk across the beach. As society develops new uses for plastics – particularly in single-use, disposable items – the variety and quantity of plastic material found in the marine environment increases dramatically. These products range from common domestic items (bags, Styrofoam cups, bottles, balloons, straws) and industrial products (strapping bands, plastic sheeting, hard hats) to lost or discarded fishing gear (nets, buoys, traps, lines).

Plastics enter the marine environment in various ways: through ineffective or improper waste management, via intentional or accidental dumping and littering at the coast or at sea and swept up by storm water runoff. The material is so durable that some plastic items can take up to 1,000 years to break down, which means that every plastic item ever made still exists and will be here after we are gone. Even then, plastics do not completely decompose, they just become smaller and smaller, eventually turning into microplastics (pieces smaller than 5 mm or 0.2 in) that enter the food chain. More than 200 species of animals have been documented ingesting plastic, including fish, turtles, birds, seal, and whales. [1] Humans are at risk too; microplastics have been found in fishes and shellfish directly sold for human consumption, as well as in beverages and food items that people consume in their everyday lives such as beer, honey and even sugar. [2] [3] [4] 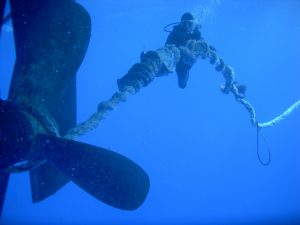 It has been estimated that more than five trillion plastic items, mostly microplastics, populate the surface layer of the world’s oceans. [5] The Great Pacific Garbage Patch (located between Hawaii and California) is the largest of the five offshore plastic accumulation zones in the world’s oceans. [6] It contains more than 1.8 trillion pieces of plastic that weigh an estimated 80,000 tons and cover a surface area of about 1.6 million km2 (or 617,763 sq. mi.) [7] This debris proliferation in the environment has led to the recognition of plastic pollution as a major global environmental problem. 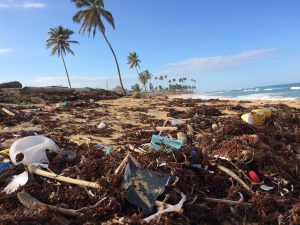 So what can we do to help?

Fortunately, not everything is lost! As people become more aware of the problem, they are launching more initiatives to tackle it. While there are a number of current initiatives that attempt to clean up marine debris that is already in the ocean, the most promising solutions focus on plastic sources. To prevent plastics from entering the ocean and harming marine wildlife, we need to address the core of the problem! In other words, we need to start reducing the use of plastics in our daily routines. This does not have to involve a dramatic overnight change: we can start by eliminating some of the most obvious disposable plastic items from our lives. Which ones first pop up in your head?

Plastic bags are a good example. Today, there are plenty of alternatives, from biodegradable bags to reusable cloth bags. The European Commission has implemented a new Plastic Bags Directive guiding national governments to ensure that no more than 40 plastic bags are consumed annually per person by the end of 2025 (currently 100 billion bags are used per year in the EU). [8] Some countries, such as the UK, the Netherlands and Portugal, have opted for mandatory charges for plastic bags while others, like France and Italy, have banned all but biodegradable and compostable plastic bags. Outside of the EU, countries including Kenya, Taiwan and Australia, and cities like Seattle are trying to make a difference in the fight against plastic pollution. [9] 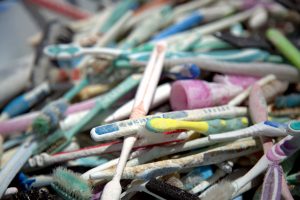 Just like plastic bags, there are other plastic products that we can stop using to reduce our ecological footprint. Some of these items seem so insignificant that we carelessly use them without a second thought as to how they may affect the environment. For instance, 500 million plastic straws are used daily in the US. [10] That is 182,500,000,000,000 straws per year in the US alone! 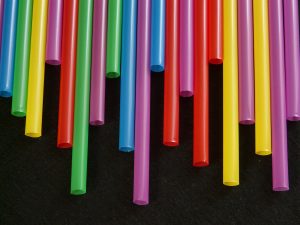 Millions of plastic drinking straws are used every day in the US. 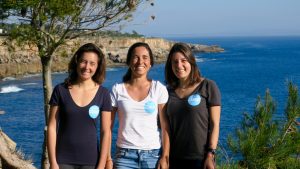 We visited restaurants and hotels to present our cause and convince these businesses that they should avoid single-use plastic straws. Ideally, each establishment would stop offering straws, but many of them are not yet ready to completely get rid of straws. As a result, we proposed that straws only be served to people who ask for them and, when this occurs, a paper straw should be served instead of a plastic one. According to similar campaigns, 50-90% of people do not ask for a straw if they are not given one initially, which means that if establishments really stick with the “only serve upon request” rule, they can actually save money! [11] 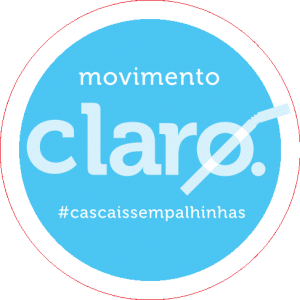 Although our initiative, Claro, is only three months-old, its success has already been greater than we had anticipated. So far more than 20 restaurants have become Claro members, along with 2 hotels, 3 music festivals and the Parish Council of Cascais. Many people have given us very positive feedback and have emailed us from other parts of the country saying that they would like to help and take our idea to where they live. We have also begun receiving emails from restaurants outside of Cascais.

But why focus on plastic straws?

Among all the single-use plastic items, plastic straws seem to be the easiest to tackle. If we think about it, except for a few specific circumstances, straws are completely unnecessary. Straws are typically used for only 15 minutes, yet they take approximately 200 years to decompose! In a world in which there may be more plastic in the ocean than fish in a mere 32 years, refusing to use a plastic straw seems like an easy first step to take. In fact, for some it will seem too small of a step. However, most revolutions begin with what appear to be insignificant changes. 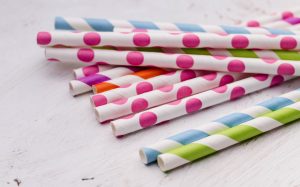 Once the facts about plastic are understood and factored into our everyday behaviors, people’s view of their broader consuming habits will change. Before we know it, what started with the refusal of a straw will evolve into something more. Bringing your own bags to the supermarket, refusing a straw and using a reusable water bottle will all become common – we will wonder why we ever did these things with disposable plastic!

Little by little, straw by straw, we will help preserve the environment and make our world a better place. So next time you order a drink, be cool and stop sucking!

You can learn more about Claro on their website and Facebook. To further explore the plastic straw issue and find solutions, check out the Lonely Whale Strawless Ocean program and the Plastic Pollution Coalition Last Plastic Straw movement.

[6] The Ocean Cleanup (2018) The Great Pacific Garbage Patch. Retrieved May 2018 from https://www.theoceancleanup.com/great-pacific-garbage-patch/

[10] Parker, L. (2018) Straw Wars: The fight to rid the oceans of discarded plastic. National Geographic: Retrieved May 2018 from https://news.nationalgeographic.com/2017/04/plastic-straws-ocean-trash-environment/

[11] Nuñez, J. (2017) The Problem of Plastic Straws (And How Each of Us Can Make a Difference), Plastic Pollution Coalition. Retrieved May 2018 from http://www.plasticpollutioncoalition.org/pft/2017/1/3/the-problem-of-plastic-straws-and-how-each-of-us-can-make-a-difference?rq=jackie%20nunez