Scientist Support for Expanded Protections for the Galápagos

Open ocean species are at risk due to intensive industrial fishing in the Galápagos region. It is crucial to strengthen the protection of the open water ecosystems around the Galápagos Marine Reserve, and to ensure the sustainable use of marine resources throughout the EEZ surrounding the islands.

To: The President of Ecuador

We write to urge you to take urgent action to protect the open ocean ecosystems in the Ecuadorian Exclusive Economic Zone by expanding and strengthening protections for marine life in the Galápagos, leaving a remarkable legacy for Ecuadorians – and for the world.

At the time of its creation in 1998, the Galápagos Marine Reserve (GMR), covering an ocean area of 133,000 km2, was the second largest marine protected area globally (today, it is the 33rd).[1] Today, in the waters of the Eastern Tropical Pacific (ETP) surrounding the Galápagos, human pressures pose significant conservation challenges, especially those related to the effects of climate change, overfishing and illegal fishing, as well as the survival of threatened and highly migratory marine species.[2][3][4][5] In light of these challenging and competing conditions, it is crucial to strengthen the protection of the open water ecosystems around the GMR, and to ensure the sustainable use of marine life throughout Ecuador’s exclusive economic zone surrounding the islands.

Marine life in the region is facing enormous pressure from domestic and foreign industrial fishing fleets. Industrial fishing fleets are responsible for the death of thousands of endangered and highly migratory marine animals every year.[6][7] Ecuador’s fleet has grown from 47 vessels in 1997 to 116 vessels in 2019.[8] Additionally, every year, a massive foreign fishing fleet sits at the edge of the exclusive economic zone around the Galápagos and fishes for species that enter and leave Ecuadorian waters.[9] Both Ecuadorian and foreign fishing fleets lure marine life out of protected areas with the use of fish aggregating devices (FADs), floating fishing devices deployed in the ocean to attract fish, especially tuna, but that also attract sharks and other marine life.[10] As climate change accelerates and the ocean warms, these unsustainable fishing practices will severely hamper the resilience, health and balance of the delicate Galápagos ecosystem.

When Ecuador established the GMR, scientists had limited knowledge about highly migratory species in the region, but over the past 20 years, that knowledge has increased significantly.[11] Sharks, sea turtles, and seabirds have long life expectancies, late onset sexual maturity, and low reproductive and natural mortality rates. These traits make them particularly vulnerable to population collapse when their mortality rates increase due to fisheries bycatch and illegal fishing. The conservation status of nearly all of the highly migratory species of the Galápagos has worsened since the beginning of the 21st century.[12] Globally, the abundance of oceanic sharks declined by 71.1% from 1970 to 2018 due to overfishing. Seven formerly abundant, wide-ranging shark populations have declined so steeply that they are now classified in the two highest IUCN Red List threatened categories, and six of these are found in the Galápagos.[13]

While the GMR protects resident coastal marine species, species that forage in the open ocean or migrate along pathways outside of the reserve, like sharks, turtles and seabirds, need increased protection. Moreover, based on observed behaviors in past El Niño events, the foraging areas of endemic species are expected to expand as sea surface temperature rises and marine productivity decreases.[14] Expanding marine protections adjacent to the Galápagos Marine Reserve would create an additional buffer between marine life and fishing fleets, giving these species a better chance of survival.

The 445,953 km2 of new marine protection will focus conservation on three key ecological elements of the oceanic areas outside the GMR: ecosystem processes, seamounts, and threatened migratory species. All of these will benefit from the proposed new protections that will facilitate connectivity and recruitment between protected areas in the region and generate resilience in the face of a highly changing environment. Regarding the conservation benefits to threatened migratory species, the new protection zone would, for example, cover 90% and 76% of the migratory routes of hammerhead shark and whale shark respectively; 91% of the foraging area of the waved albatross at the southeast of the Galápagos EEZ; and 77% of the leatherback turtle’s critical habitat.

At the same time, the proposed expanded protections are an investment that will provide long-term benefits for civil society. The conservation of biodiversity and marine habitats will contribute to food security and provide various benefits to future generations, not only in Ecuador but at regional and global scales. The protection of fish populations and the spillover of those populations from fully protected areas to fished areas will safeguard livelihoods, as national fishing fleets will maintain access to key fishing grounds[16], and the Galápagos artisanal fishery will benefit from the reduction of illegal fishing inside the GMR. Tourism, which is highly dependent on marine biodiversity, will also benefit from healthier and more abundant populations.

We urge you to review and accept this proposal to protect biodiversity in Galápagos by expanding protections around the Galápagos Marine Reserve. For Galápagos. For Ecuador. For the planet and all of us who inhabit it. 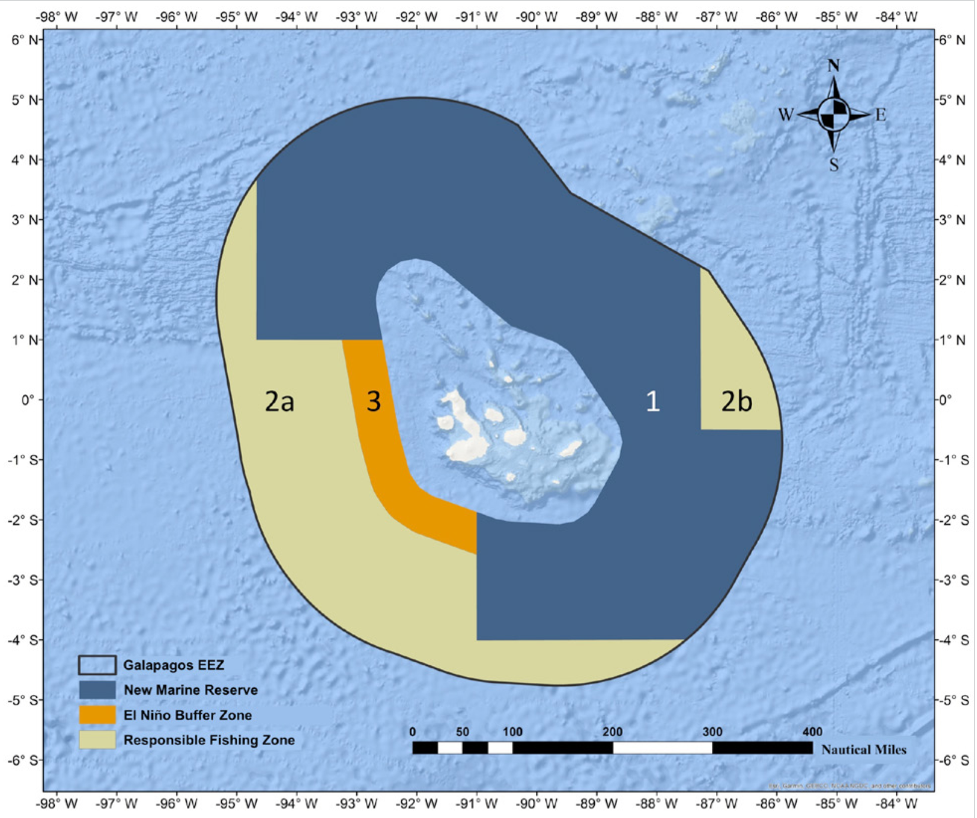 Figure: Proposal for integrated management of the entire Gálapagos (Ecuador) EEZ. The proposal contemplates the creation of a marine reserve area (Zone 1, in blue), where extractive activities are not permitted; and the creation of two Responsible Fishing Zones (Zone 2, in green), where fishing is permitted under certain conditions to manage activities sustainably. FADs would not be permitted in Zone 2b. Zone 3 (in orange) would be managed under the same conditions as Zone 2a, except during El Nino events, when it would become a temporary no-take zone.

[11] Hearn, A., et al. (2021) A Proposal for Marine Spatial Planning of Ecuador’s Exclusive Economic Zone around the Galápagos Marine Reserve.

[14] Elorriaga-Verplancken F.R., et al. (2016) Impact of the 2015 El Niño-Southern Oscillation on the Abundance and Foraging Habits of Guadalupe Fur Seals and California Sea Lions from the San Benito Archipelago, Mexico. PLOS ONE 11:e0155034.

[15] Hearn, A., et al. (2021) A Proposal for Marine Spatial Planning of Ecuador’s Exclusive Economic Zone around the Galápagos Marine Reserve.

More ways to get involved

> Read the proposal summary in English or Spanish

> Learn about the Galápagos Marine Reserve, a 2019 Blue Park

> Sign the general petition of support for expanded protections around Galápagos at Only.One

*Please note that there is a lag time between when a new signature is submitted and when it appears on the list below.