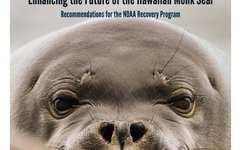 Marine Conservation Institute's monk seal campaign focuses on working constructively with fisherman and other stakeholders to meet the seal's conservation needs, while also educating the public on how to co-exist with the growing number of seals in the main Hawaiian Islands. Our new report, Enhancing the Future of the Hawaiian Monk Seal: Recommendations for the NOAA Recovery Program, takes a detailed look at the seal recovery program and how it could be improved to achieve a self-sustaining population in the next several decades.

Although seals in the Main Hawaiian Islands are increasing through natural reproduction, the high mortality of seals in the Northwestern Hawaiian Islands is causing and an overall population decline of about 4% per year. If that trend continues, in less than 20 years, the population would be halved to 450-550 seals and the species would be in an extremely precarious position, leaving it vulnerable to a disease outbreak or environmental disruption events like hurricanes or ocean warming.

William Chandler, the report's author, said, “Recovering the monk seal is not rocket science; we can do this, but NOAA has to be serious about implementing its own plan. The agency also needs to be more transparent about its activities and needs so that other agencies and nonprofits can help. If we lose the battle to save the Hawaiian monk seal, we’ll have only ourselves to blame.”