Marine life knows no political borders. Through shared species and ecosystems, Canada, Mexico and the US are intimately linked. 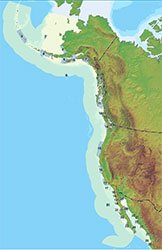 From Baja California through the bays and inlets of the Pacific Northwest, to the highly productive Bering Sea, the west coast of North America teems with a wide range of uniquely important marine environments. It is also home to a great number of shared marine species — such as gray and blue whales, leatherback sea turtles and bluefin tuna — all of which migrate thousands of miles, moving across national borders without hesitation. Because of these shared species and ecosystems, the marine environments of Canada, Mexico and the United States are intimately linked. Accordingly, action or inaction on one side of a border will have consequences for the shared living organisms occupying ecosystems with no finite boundaries found in the ocean.

In 2005, MCBI and the Commission for Environmental Cooperation (CEC) of North America released the study Marine Priority Conservation Areas: Baja California to the Bering Sea (B2B), highlighting the 28 most important places to protect along the North American coastline from the edge of the Arctic Ocean to the Tropical East Pacific. These sites include especially unique areas such as the Gulf of California, important migratory corridors like Unimak Pass, and areas rich in biodiversity such as Monterey Bay. Marine experts consider these areas essential to safeguarding the biological diversity of the West Coast of North America.