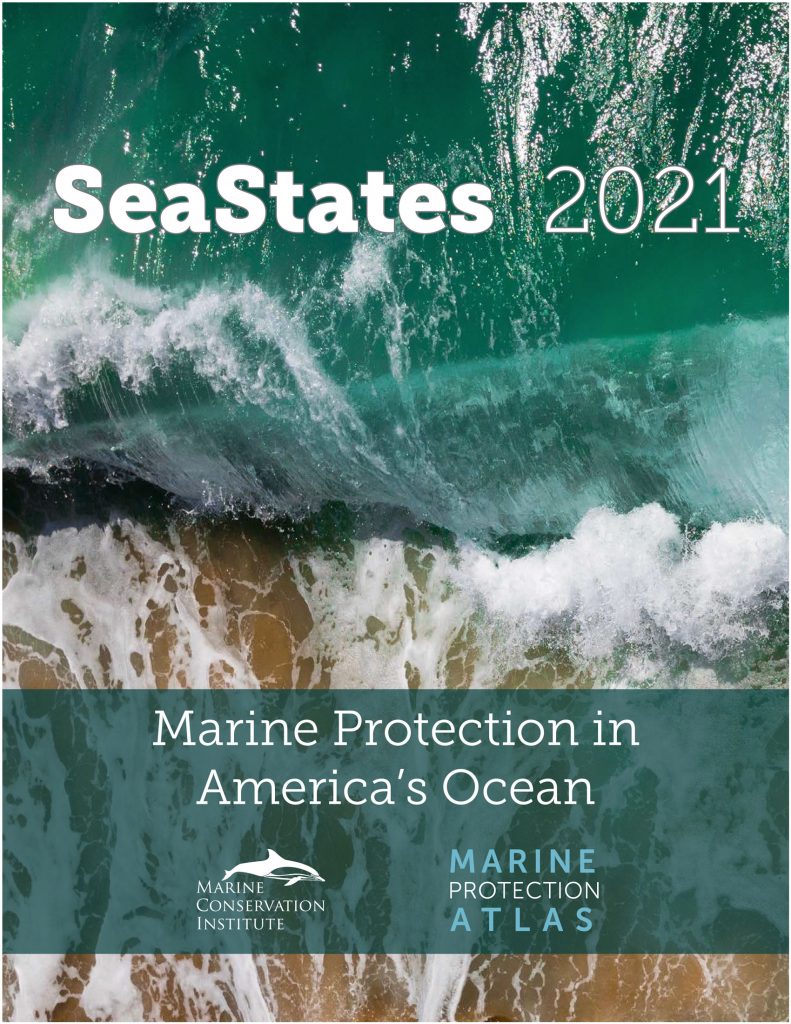 President Biden’s executive order on addressing climate change on January 27, 2021, commits the US to ‘the goal of conserving at least 30 percent of our lands and oceans by 2030 and launches a process for stakeholder engagement’ to achieve that. This is great news; protecting ocean and coastal ecosystems can address climate change by storing huge amounts of carbon. But while the US has strongly protected 23% of its oceans already, almost all of that is in the central and western Pacific. Without those areas, only 0.01% of federal waters and 1.05% of state waters are in fact strongly protected. Achieving representative conservation around the whole US will clearly require a lot of additional effort.

SeaStates 2021 is a rigorous, quantitative accounting of fully and strongly protected MPAs in America’s ocean updated annually by the team at MPAtlas.org. First published in 2013, our annual reports are intended to measure US progress as a whole, and state progress towards effective marine protection in their coastal waters.

Oceans are essential to human survival and prosperity, yet our activities are damaging many ecosystems and pushing numerous critical marine species toward extinction1. Many marine biologists advise policy makers that the best way to maintain the oceans’ diversity, abundance and resilience is to protect marine species in their ecosystems, especially in marine protected areas (MPAs) that minimize extractive activities such as fishing, mining, and oil and gas development2.

Unfortunately, the vast majority of MPAs in the US and around the world lack the regulations, characteristics, and management critical to ensuring they successfully safeguard marine life3. They lack fishing regulations altogether, have minimal rules or lack other critical elements. No-take marine reserves, in contrast, prohibit all extractive activities and deliver the conservation protection that marine life need to thrive4 and that the public assumes when the words marine reserve or marine protected area are used. Protecting biodiversity in marine reserves increases the abundance and diversity of marine life inside the reserve and typically results in the export of marine life to surrounding areas4,5. In short, no-take MPAs effectively protect marine life, can secure food resources for millions of people by exporting fish outside the MPA, and prevent loss of species. Strongly protected areas are those in which extraction is quite limited and conservation benefits are high but not as high as fully protected areas.  These include Papahānaumokuākea Marine National Monument, Rose Atoll Marine National Monument and Pacific Remote Islands Marine National Monument which are all large and isolated but allow some very restricted recreational fishing.

In this report, we combine ‘fully protected’ no-take marine reserves, with large and isolated ‘strongly protected’ MPAs3 where commercial extraction is prohibited, but recreational fishing is carefully managed, highly restrictive, and subsistence use is minimal. We use the word ‘strongly’ in the maps and charts below to refer to both categories. 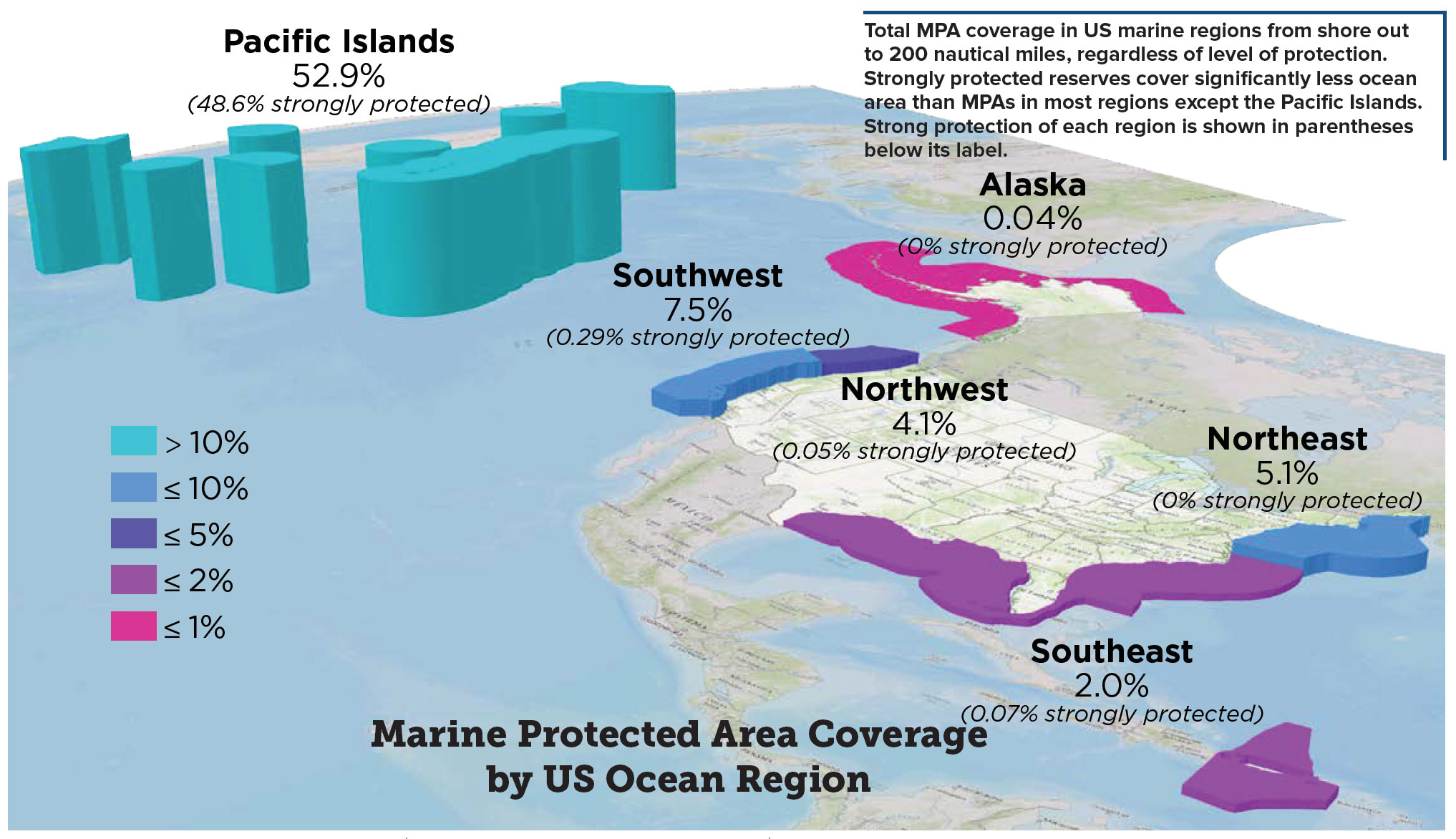 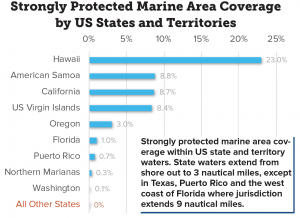 With no new MPAs designated in the past four years of the Trump administration, there has been little change in the state rankings since our last report. As of the end of 2020, 23.2% of all US coastal and marine waters (state and territorial waters plus our entire US Exclusive Economic Zone, EEZ), was strongly protected. If we exclude federal waters, coverage of state and territorial waters (generally out to 3nm) only is 1.3% in strongly protected areas. Counting only federal waters (beyond state waters out to limit of EEZ, ~3-200nm), 23.8% is strongly protected.

The greatest coverage of strongly protected areas is in the waters of Hawaii, American Samoa, California and the US Virgin Islands. Hawaii benefits from having one of the world’s largest MPAs, Papahānaumokuākea Marine National Monument, included in some of its state waters as does American Samoa with Rose Atoll Marine National Monument. California has a higher percentage because of the state’s Marine Life Protection Act that methodically placed relatively large areas of state waters under various protections in the early 2000s. 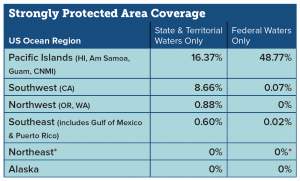 *Northeast Canyons and Seamounts Marine National Monument covers 3.4% of northeast federal waters, but is not included here because it still allows crab and lobster fishing until 2023 under Obama’s 2016 designation and under President Trump’s 2020 Executive Order it allows commercial fishing with no phaseout. While it is not strongly protected now, the Biden administration announced on January 20, 2021 that it would review the status of protections over the next 60 days and may reverse or change Trump’s Executive Order.

We should note that if all the MPAs as well as state and territorial waters in the Central and Western Pacific (other than off the coastal western states) are removed from this analysis, only 1.05% of continental state waters and 0.01% of continental federal waters are in strongly protected MPAs.  Without our Pacific Island MPAs, coverage of US waters is almost infinitesimal, and the US would be well behind other countries in achievement of international goals such as 10% MPA coverage by 2020 (Convention on Biological Diversity and UN Sustainable Development Goal targets). To reach the further target proposed by the Biden Administration (at least 30% coverage by 2030) will require significant investment in our ocean. We need to do much better at creating MPAs outside the Pacific.

Our ocean has many different habitat types with species assemblages unique to each one. It is critically important that we balance protection across all habitats in each marine region, but we have yet to achieve much representative protection in the United States. This table below depicts the problem of poor regional coverage by MPAs. Only Hawaii and our other Pacific territories (American Samoa, Guam, Northern Marianas, and Pacific remote islands) have any substantial degree of protection from MPAs. Most of other state and territorial waters are nearly completely open to extraction of fish and other things. While the US technically reached the 10% area target of the Aichi Biodiversity Targets, we did not reach the ecologically representative target, and left most unique habitat types in continental waters without any protection. On land, this would be like saying we reached international goals by protecting our deserts but left out any protection for redwood forests, plains, hardwood forests or dozens of other ecosystems. This kind of protection would be considered absurdly unbalanced. 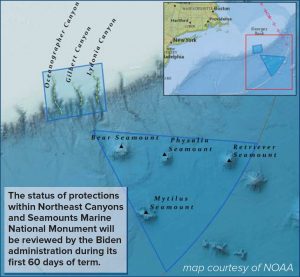 The incoming Biden/Harris administration brings hope for the return of progressive conservation leadership rooted in sound science and governance. President Biden’s election platform stated that he was committed to protecting at least 30% of our land and sea by 2030 and re-entering the UN Paris Climate Agreement.

Biden and Harris also ran on the most ambitious climate plan of any presidential candidate to date. One highly regarded report6 concludes that the ocean could be the source of up to 20% of greenhouse gas emission reductions needed to limit climate change to a 1.5 degree increase. Given that carbon taken up in MPAs protecting mangroves, marshes and seagrass beds is part of that 20%, there is hope that the new administration will harness the power of the ocean to mitigate climate change, protect marine and coastal ecosystems, build resilience, and protect coastal communities.

Over the past four years the US lost valuable time in the race to save our oceans and our planet, but we now have an important opportunity to take crucial and aggressive steps to change the earth’s current trajectory. President Biden has appointed a team of diverse, qualified environmental champions as his ‘climate team’. These experienced policy makers are committed to fighting climate change and environmental injustice. Notably for the ocean, Biden has appointed former Secretary of State, John Kerry, who is a long-time ocean advocate (hosting the first Our Ocean Conference, for example), as special presidential envoy for climate. With leaders who understand the urgency of addressing climate change and prioritizing environmental conservation, we can look toward the future with hope.

The clock has run out for the Aichi Biodiversity Targets established in 2010. At the global scale, the world missed the mark for Target 11, which called for protecting 10% of ocean area. Instead, our MPAtlas calculates that the world protected 2.7% of the ocean in strongly protected implemented MPAs and another 3.7% in implemented but less well protected areas for a total of 6.4% which is well short of 10%. The US more than met its Aichi Biodiversity commitment – strongly protected MPAs cover 23.2% – but with limited geographical distribution.

President Biden’s commitment aligns with marine scientists’ recommendation to strongly protect at least 30% of the ocean in ecologically representative and well-connected systems of marine protected areas (MPAs) or other effective conservation measures7. This is not some new, radical policy solution. At the 2016 International Union for the Conservation of Nature’s World Conservation Congress, a motion was passed by an overwhelming majority of nations, NGOs and businesses to protect at least 30% of each marine habitat in a network of MPAs with the ultimate aim of creating a fully sustainable ocean. The UN Convention on Biological Diversity has also drafted a post-2020 global biodiversity framework that includes 30% protection of the land and sea by 2030.

After four years of stagnation and backsliding, we still have a long way to go to reach 30%, particularly 30% that is well-representative of US coastal and marine ecosystems. The US will need a strong push to designate new protected areas and improve the management and regulations of existing, lesser protected MPAs in the next decade. It is important, now more than ever, that we make up for lost time.

Information used in this report was obtained on December 23, 2020. For current data, please consult https://mpatlas.org. We acknowledge NOAA MPA Center for information about US marine protected areas.