Tharaka Sriram is a marine conservationist, educator and activist for women`s rights and against racism.

She has an academic background in Spanish, International Relations and Gender Studies (B.A.) at the University of Mannheim and an M.A. in Governance, Public Policy and Environmental History at the Technical University of Darmstadt.

Tharaka has lived and worked on six of the seven continents, in the fields of marine conservation, diversity and youth empowerment, e.g. the UN (Bolivian National Commission UNESCO COMINABOL and United Nations Volunteers UNV /UNDP Côte d`Ivoire), NGOs and other development cooperation institutions.

In 2008 she volunteered with women’s organizations in Latin America. It was in a small- scale fishing community in Peru, where she discovered that depleted fish stocks were the cause of domestic violence against women. That was the moment when the curiosity and passion for the ocean was ignited in her.

In 2015 she founded the ocean literacy initiative „Ocean Education“, giving talks and workshops on Marine Protected Areas, in order to fight for the creation of a worldwide network of highly protected MPAs.

In November 2017, Tharaka travelled to 17 countries in 11 months to visit Marine Protected Areas, which was the first ever world trip with the focus to find out more about MPAs around the world. She spoke with Ministries, NGOs and individual marine conservationists on the challenges and best practices. The journey showed, that around the globe, there needs to be a stronger political commitment geared towards the conservation of marine biodiversity: By „putting the money where the mouth is“, with quicker establishment of MPAs, passing laws to designate and then follow up with the active implementation where financial support for proper enforcement is crucial.

She is one of the 300 women in the EXXpedition team, a female citizen science research mission, sailing across the globe to draw attention to the effects of plastics and environmental toxins. 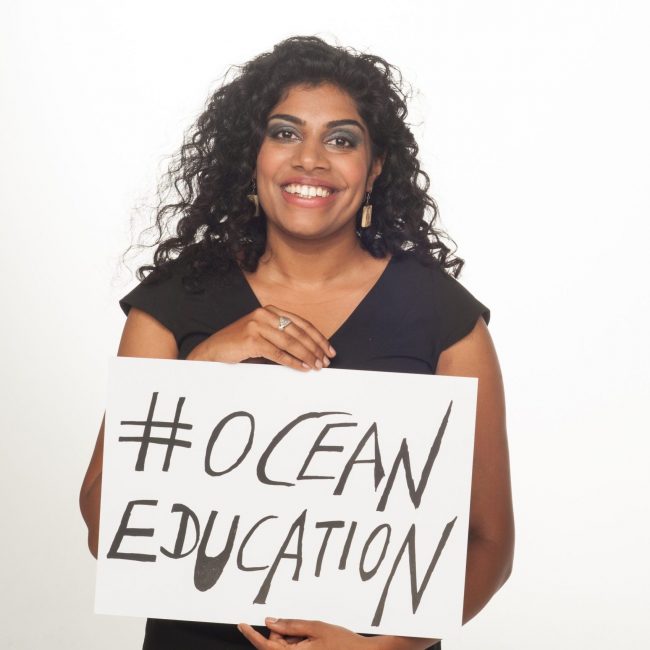