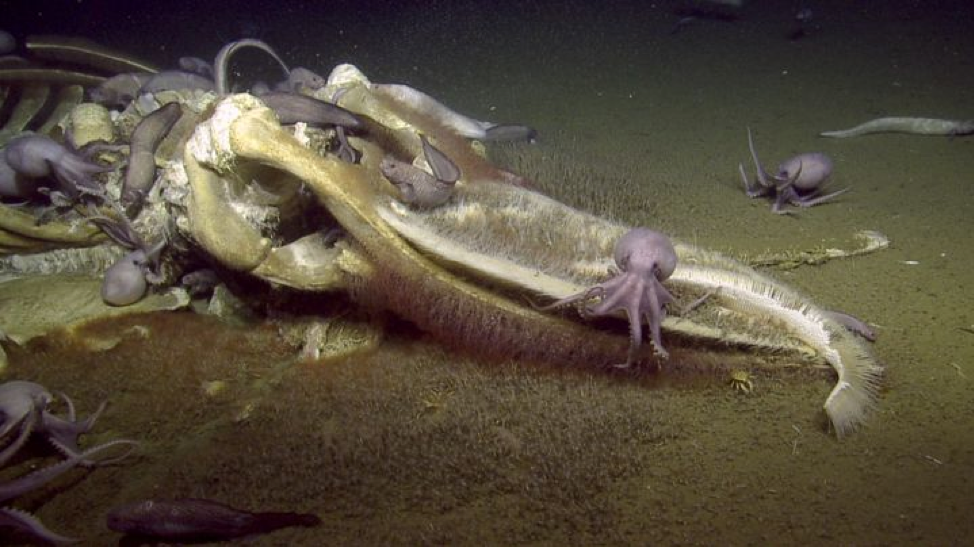 Featured Picture: A baleen whale fall on Davidson Seamount off the coast of California. Image courtesy of Ocean Exploration Trust.

The deep sea is the last great unexplored region of our planet. We only have detailed maps for approximately 5% of the ocean – most of the seafloor maps you see are very coarse estimates based on remote sensing data from satellites. Perhaps more importantly, we have visually surveyed less than 1% of the ocean – leaving the vast majority of our oceans completely unmapped and unexplored. The deep sea (all waters below 200 m – 90% of the marine environment) is the largest biome on the planet, and we urgently need to better characterize and understand this important environment. The deep sea is vital to healthy oceans and a healthy planet, proving key functions including climate regulation, nutrient recycling, and the hosting of a large amount of biodiversity (as much as 75% of all marine biomass). Deep-sea habitats house a wide array of fascinating ecosystems ranging from vast coral reefs, extraordinary hydrothermal vents, and diversity hotspots including seamounts. Unfortunately, these habitats are all highly vulnerable to disturbance and are critically threatened by a number of anthropogenic stressors including pollution, fisheries, oil and mineral extraction, and climate change.

Surveying deep-sea environments is urgently needed to better characterize the biological communities they house and the ecological functions they provide. However, the great expense and technological difficulty of exploring the deep ocean limits our ability to effectively survey large areas, making every field expedition extremely valuable. The E/V Nautilus is one of relatively few vessels dedicated to exploring unknown deep-sea environments, and is outfitted with an array of modern technology including multiple remotely operated vehicles, a high-resolution seafloor mapping system, and a satellite uplink that provides live video feeds of seafloor surveys. In 2019, the E/V Nautilus explored and mapped a number of deep-sea habitats off the coast of California, greatly contributing to our understanding of deep-sea habitats in U.S. waters.

Sonar Mapping of the Seafloor 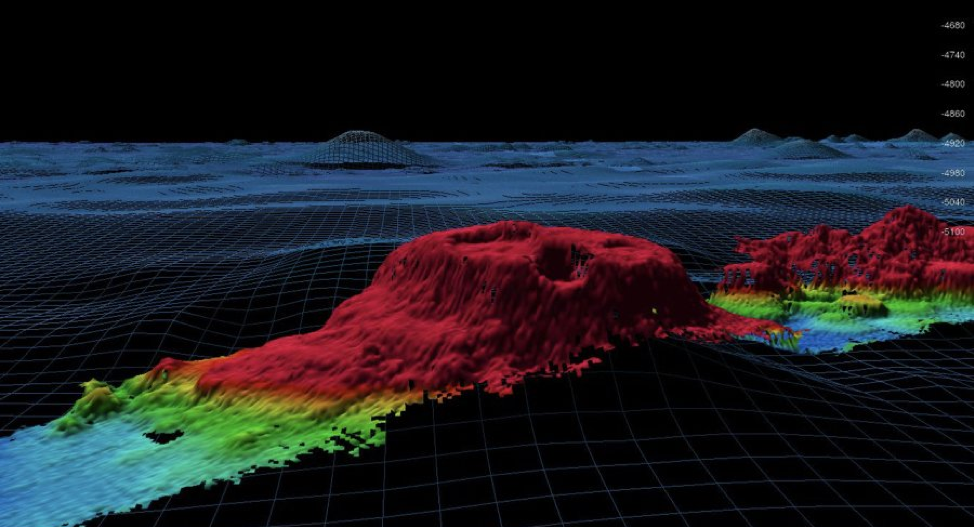 One of the most critical sensors on the E/V Nautilus is the ship’s multibeam echosounder – a device that uses a specific type of sonar to map the seafloor at a very high resolution. Echosounders fire a swathe of soundwaves towards the seafloor, and measure the length of time it takes for the waves to hit the seabed and bounce back to the ship. These data allow scientists to map the depth of the seafloor with a very high precision and accuracy, and also provides backscatter data that characterizes the type of sediments on the seafloor. Depth – and by proxy, physical features on the seafloor such as ridges or mounds – and sediment type are critical factors for determining where deep-sea organisms live, and mapping the seafloor therefore allows scientists to infer considerable amounts of information in unexplored regions. In 2019, the E/V Nautilus conducted extensive mapping operations off the California coast, including large areas of the seafloor in the Greater Farallones, Cordell Bank, and Monterey Bay National Marine Sanctuaries, Osborn Bank, Gorda Ridge, and remote seamounts such as the Moonless Mountains in the Murray Fracture Zones. In addition to aiding in the identification and subsequent surveying of biological ecosystems, multibeam mapping helps geologists understand the structure and history of large seafloor features such as seamounts. The maps produced by the 2019 expedition will generally inform conservation and management efforts in the region for years to come, but were also carefully planned to strategically support the seafloor surveys conducted later in the field season (see below). In addition, the expedition team is dedicated to supporting the Nippon Foundation-GEBCO Seabed 2030 Project, an international collaborative effort to map the entire ocean floor at a high resolution by the year 2030.

In May 2019, the E/V Nautilus explored Gorda Ridge, a massive seafloor feature off the coast of northern California. Gorda Ridge is located approximately 120 miles off the coast of northern California at the intersection of the Gorda Plate, the Juan de Fuca Plate, and the Pacific Plate. As the Pacific and Gorda plates move apart due to plate tectonics, the resulting spreading center created the ridge approximately 30 million years ago, and continues to cause volcanic and seismic activity in the region. A large eruption was observed as recently as 1996, covering an area of seafloor over 650 feet high and two miles long with lava. As a result of this volcanic activity, the region houses the only known hydrothermal vent ecosystems in U.S. waters. Hydrothermal vents are incredible deep-sea ecosystems that form due to the venting of extremely hot and mineral rich fluids into the water column. These vents support a wide array of exotic benthic organisms that rely on these venting fluids as their sole source of energy, including vestimentiferan tubeworms (Ridgeia piscesa), and a newly discovered species of limpet (Lepetodrilidae gordensis).

In collaboration with the NASA Systematic Underwater Biogeochemical Science and Exploration Analog (SUBSEA) program, the 2019 expedition team discovered a new vent system at a depth of almost 9,000 feet – jestingly referred to as ‘sir vents a lot’, but later named the Apollo Vent Field in honor of the 50th anniversary of the moon landing. NASA hopes that studying hydrothermal vents will provide important analogs for extreme environments on planets and moons in our solar system, potentially providing key insights for future life-hunting missions to Enceladus and Europa. Unfortunately, the minerals that naturally occur in hydrothermal vents make this area a potential target for future deep-sea mining efforts, making it critical to survey and characterize these habitats before they are irrevocably damaged by commercial activities.

The expedition also explored deep-sea habitats in the Greater Farallones, Cordell Bank, and Monterey Bay National Marine Sanctuaries. Compared to neighboring deep-sea habitats, these areas are relatively well-explored. The 2019 expedition was partially driven by upcoming changes to the conservation status of the California coast, and focused on areas that will either be opened or closed to fishing in the near future. Documenting the biodiversity that exists in these areas is an important step towards fully understanding the impact that human activities have on these fragile ecosystems. As expected from previous expeditions, the team documented an incredible diversity of corals, sponges, and fish over the course of several remotely operated vehicle surveys in these sanctuaries. However, they also made unexpected sightings that highlight the importance of exploring these habitats to their full extent. 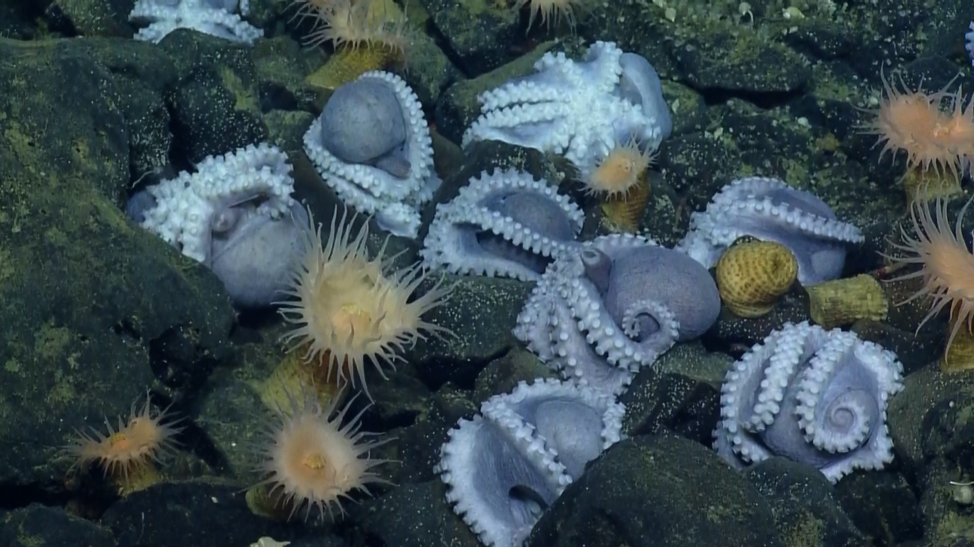 During its 2018 field season, the E/V Nautilus made an astonishing discovery – an ‘octopus garden’ of more than 1,000 brooding female octopuses (Muusoctopus robustus). The aggregation occurred in a shimmering, hot vent almost 10,000 feet deep just south of the Davidson Seamount. Davidson is the best explored and well-known seamount in California waters and is already known to house more than 230 species, including 25 species of deep-water corals – some of which are bamboo corals over 200 years old. Despite frequent surveys of Davidson Seamount, this brooding aggregation was quite a surprise, and such an astonishing discovery that the expedition team decided to return in 2019. Scientists were particularly interested in taking measurements to help understand why this site appears to be such an important nursery ground for these octopuses, leading the team to install long-term temperature and dissolved oxygen loggers which will be recovered in 2020. Subsequent surveys of the site have revealed that the octopuses are still brooding en masse, with observable development and even hatching of some embryos.

As surprising as the initial sighting of the octopus garden was in 2018, the team managed to make an even more surprising discovery on their return to Davidson Seamount in 2019. On the last dive of the field season, they happened upon a whale fall – an extremely rare event that was only discovered in 1977. A whale fall is simply the carcass of a cetacean that falls into deep enough waters to significantly slow down its decomposition due to the low temperature, high pressure, and different scavenger community found in the deep sea. While a dead whale carcass may not seem exciting, it supports a unique, ephemeral deep-sea community not found anywhere else (and certainly excited the scientists onboard!). As are commonly found on other whale falls, the team found a unique community of scavengers such as Osedax worms – mouthless ‘zombie worms’ that use acid to burrow into skeletons in search of high-energy lipids, as well as an array of fish, octopuses, and crabs. The whale fall was approximately 13-16 feet long and located in waters deeper than 10,000 feet. From the skeleton and tissue remaining after an estimated four months of decomposition, scientists have determined that the whale is a baleen whale, possibly a grey or minke whale. This surprising find shows how valuable deep-sea surveys can be. Whale falls are rare and may only exist for a few decades before completely decomposing, and previous finds have resulted in the discovery of new species. Only time will tell what other amazing discoveries may be uncovered by future expeditions to the deep California coast!