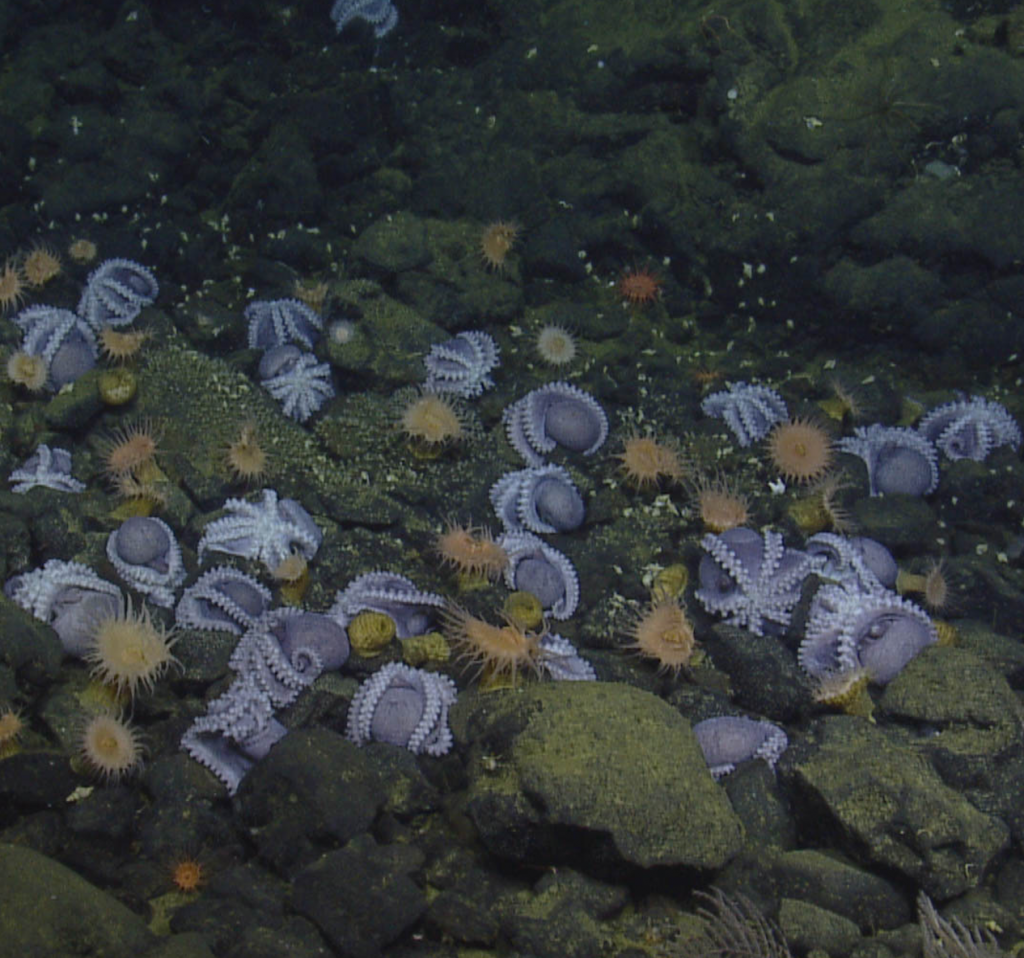 The deep sea is a harsh place to live. Lacking the sunlight-fueled productivity that drives shallow-water food webs, the deep sea is extremely limited by available food, leading to slow growth rates, low reproduction, and a reduced ability to recover from disturbances. Organisms in the deep sea also have to deal with cold temperatures, near-complete darkness, and high pressure. Deep-sea species have a number of methods to cope with their difficult environment. They have special adaptations – for example, angler fish create light to lure prey close enough to snatch. Frequently, deep-sea organisms have also evolved highly specialized interactions with other species, known as a ‘symbiosis’ (Greek for ‘living together’). Symbiotic organisms (called symbionts) often have a long-term and close biological relationship with another individual that usually helps each species survive and thrive.

Not all symbiosis is beneficial for all of the involved parties – there are three basic types based on which species benefits. Mutualism is a form of symbioses in which both species benefit. Commensalism occurs when one organism benefits, and the other is not significantly affected. Finally, parasitism occurs if one species benefits at the expense of the other.  Parasites are disturbingly common in the world – an estimated 40% of all animal species are parasites! For many deep-sea organisms, mutualism is the difference between thriving or dying off. Below are some real life examples!

Brittle stars have long been known to have a close association with many cold-water coral species. In some cases, this association is incredibly tight. For example, Ophiocreas brittle stars  only associate with one species of coral (Metallogorgia), and never relocate after their larval stage – not even to another colony of the same species. Until recently, it was generally thought that this was a commensal relationship, one  that benefits the brittle stars without harming or helping the coral. Perching high in the water column and gaining access to faster, more nutrient-rich currents can be critical for the success of brittle stars, but does this relationship really have no effect – positive or negative – on the corals they inhabit?

Oddly enough, it took the largest marine oil spill in history to unravel the true nature of the relationship between brittle stars and cold-water corals. In 2010, the Deepwater Horizon oil spill released an astonishing 4.9 million barrels of oil directly into the deep sea. Several cold-water coral communities in the vicinity of the spill were subsequently found to be covered in oil and dispersants (chemicals used in the cleanup effort to help disperse oil particles). However, partially damaged corals were often able to recover – particularly when they had a brittle star symbiont living on them. Damaged coral colonies that had at least one brittle star on them recovered significantly faster after the oil spill, and brittle stars were most commonly observed on healthy parts of the corals. Scientists speculate that the brittle stars remove oil contaminants and other sediments from coral branches, and may even prevent colonization from parasites that might impede the recovery of damaged tissues.

Bit Off More Than You Can Chew? Get Help From a Microbe!

Did you know that more than half of the cells in ‘your’ body are actually microbes (bacteria, fungi, etc.) living in your intestinal tract? Living in our gut provides the microbial community with food resources and a place to live, while helping us break down difficult to digest foods. Many deep-sea organisms similarly use microbes to aid in digestion, with some of the most striking examples coming from cold seeps. A cold seep occurs when hydrocarbon-rich (typically methane and hydrogen sulfide) fluids leak (or ‘seep’) through fractures in the seafloor. Although the fluids are extremely energy dense, there is one problem – animals can’t break down methane or hydrogen sulfide. Fortunately, highly-evolved microbes bridge the gap between these high-energy chemical compounds and animals that lack the ability to exploit them on their own. Bathymodiolus mussels have evolved to house symbiotic bacteria in their gills that break down the methane being released by the cold seep into forms that the mussels can use for energy. Tubeworms found at cold seeps have evolved such a highly specialized relationship with their gut bacteria that they no longer have an actual digestive track. Instead, they have developed an extensive root structure that extends deeper into even richer seep fluid, providing a constant stream of hydrogen sulfide to symbiotic bacteria that are capable of breaking it down.

In a real case of ‘truth is stranger than fiction,’ a dead whale gives rise to one of the oddest mutualisms in the deep sea. When a whale dies, it sinks to the ocean floor and gives life to a temporary community of scavengers ranging from fish, octopuses, and zombie worms. The worms (Osedax sp.) get their name from their bone-eating tendencies, using acid to burrow into whale skeletons in search of high-energy lipids, or fats. Like tubeworms, they have no digestive system of their own (not even a mouth!), instead relying on symbiotic bacteria to help turn the collagen and cholesterol found in bones into fatty acids that can be used as an energy source by the worms. In turn, the bacteria benefit from being housed in resource rich root structures that the worms extend into the whale bones. In addition to increasing diversity in the deep sea, this mutualism plays an important role in recycling nutrients back into the ecosystem, as well as sequestering carbon.

Friend or Foe: What Type of Symbiont will Humans be?

Species interactions like the ones described above are instrumental in helping many deep-sea organisms thrive in very challenging deep-sea environments. However, they are not a magical cure that enables organisms to recover from extreme levels of disturbance – like those caused by human impacts on the deep sea. If we place too much stress on deep-sea habitats through bottom trawling, overfishing, pollution, oil extraction, mining, or climate change, we may damage these fragile communities beyond their ability to naturally recover. The deep sea provides us with a rich array of ecosystem services, pharmaceutical cures, and aesthetic beauty. Let’s make sure that our relationship with the deep sea is one of mutualism, not parasitism. We need to act now to secure long-term protection for deep-sea ecosystems before they are irrevocably damaged or lost completely.