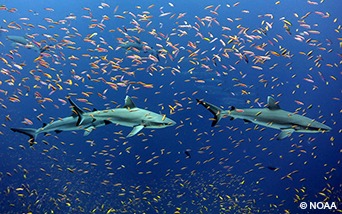 It is Shark Week and sharks are once again at the forefront of our public consciousness. Thanks to terrifying portrayals in movies like Jaws and this summer’s The Shallows, sharks have a reputation as blood-thirsty killers. But, if anything, sharks should be more frightened of humans than vice versa. Every year, humans kill over 100 million sharks in fisheries[1] – either through deliberate shark fishing or as bycatch. Meanwhile, from 2006-2010, the average annual count of fatal shark attacks worldwide was just over 4.[2]

Sharks are apex predators. This means that they have few natural predators and that their position at the top of the food web structures marine communities. By directly influencing the number and spatial distribution of prey, the presence of sharks has important regulating effects that cascade through the trophic levels of an ecosystem, down to the smallest phytoplankton.

Research shows that this ecological regulation encourages species diversity, resulting in healthier and more resilient ecosystems. In fact, an untouched ‘pristine’ reef environment will often have the greatest biomass at the top of the food web, making an abundance of sharks necessary to maintain a truly healthy ecological balance.[3]

There are also economic benefits to keeping these predators alive. A 2012 study focusing on Palau found that shark diving ecotourism generated $18 million a year, while a fished shark was worth a measly $108.00.[4] This is because sharks directly support the ecotourism industry to the tune of more than $314 million annually.[5] By emphasizing both the economic and ecological value of shark species, conservation groups like the Pew Charitable Trusts and Sir Richard Branson’s Virgin Unite have helped to push governments towards implementing better and more comprehensive shark protections.

To help combat threats to sharks (and by extension, the fragile ecosystems they inhabit) governments around the world have designated shark sanctuaries. Some have partial fishing bans in particular zones, or have added specific shark protections to existing marine protected areas, while others have designated their entire exclusive economic zone (EEZ) as off limits to shark fishing. The first such sanctuary was declared in 2009 by Palau, and many nations have followed suit in the intervening years. To track commitments to shark conservation around the world, MPAtlas.org has created a map layer that displays data on current shark sanctuaries.

When Marine Conservation Institute last analyzed the status of shark sanctuaries in 2014, 20 EEZ shark sanctuaries existed in 19 countries. This year, the number has grown at a breakneck pace, and three new sanctuaries have been declared and implemented in 2016 alone. Important shark habitat in the Galapagos Marine Sanctuary and the entire EEZs of both Saint Maarten and the Cayman Islands are now off limits to shark fishing.[6] Five other sanctuaries are planned for the next year; the Caribbean islands of Curaçao and Grenada have announced plans to make their EEZs shark sanctuaries, and the Philippines have specified three areas to be designated sanctuaries on top of other existing marine protections; including the massive new marine protected area of Tun Mustapha.

This progress does not mean that our work protecting sharks is done. Fishing still occurs illegally in protected zones, and vast areas of ocean are left unprotected. Effective enforcement of existing sanctuaries is important, but we must continue to recognize the value of conserving keystone species within the context of their entire ecosystem. Fully-protected reserves provide the strongest protection and healthy shark populations are a result of healthy systems where prey and predator alike are protected. Only by continuing to make bigger and better marine protected areas- including shark sanctuaries- can we hope to preserve the vital biodiversity of the ocean against the ravages of climate change and human consumption. 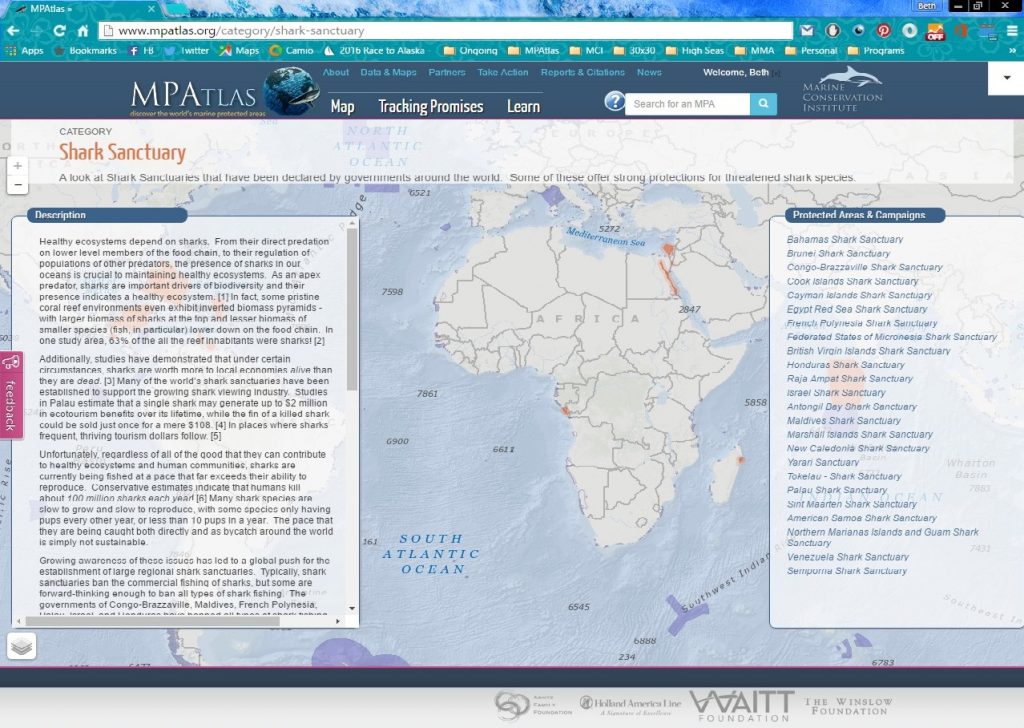