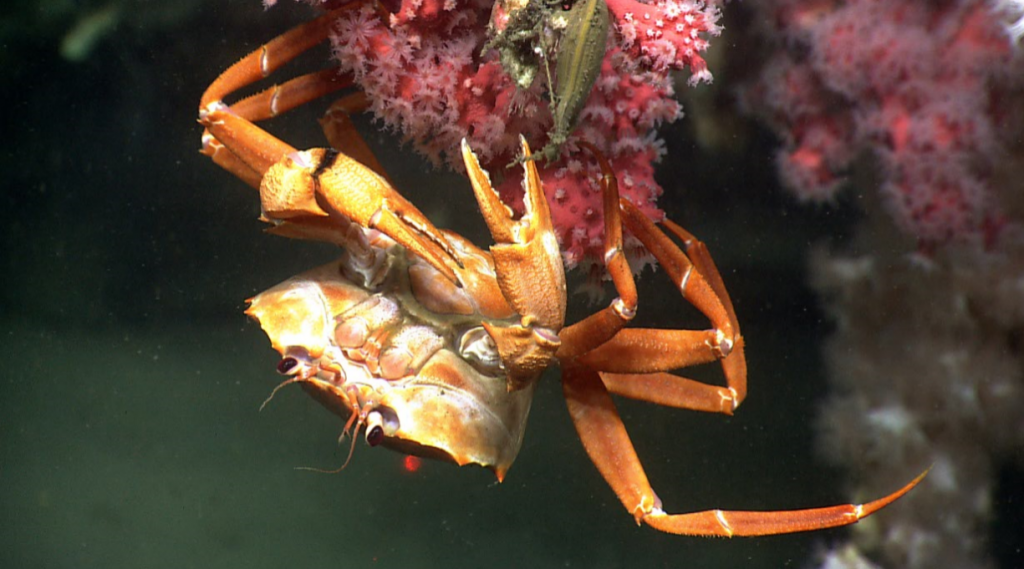 The concept of a vulnerable marine ecosystem, commonly referred to by its acronym VME, in high seas marine conservation management is about a decade old. United Nations General Assembly resolution 61/105 called “upon States to take action immediately, individually and through regional ﬁsheries management organizations and arrangements, and consistent with the precautionary approach and ecosystem approaches, to sustainably manage ﬁsh stocks and protect vulnerable marine ecosystems [VMEs], including seamounts, hydrothermal vents and cold water corals, from destructive ﬁshing practices, recognizing the immense importance and value of deep-sea ecosystems and the biodiversity they contain.”

But how to determine what is a VME? This is not an easy question to answer, but certain groups of animals are vulnerable to fishing gear, and so could be designated as VME indicator species. These are groups such as deep-sea corals and sponges that are very long-lived, easily removed or broken by fishing gear, and have low reproductive output.

Seamounts are very special places that often host VME indicator species. They are true mountains under the sea, defined as being at least 1000 m high, but often are 3 or 4 km in height. Because they usually originated as volcanos, they are made of rocks derived from basaltic lava, and provide a substrate on which corals, sponges, and other species can settle.

By rising up from the surrounding bottom to such large heights, seamounts can alter the flow of ocean currents, delivering slightly enhanced numbers of small particles to the suspension-feeding animals. Flow enhancement usually occurs along the sides of the edge near the seamount top, but also anywhere on the summit where there is a ridge or pillar or other rock feature that protrudes slightly above the local bottom. On those structures very high densities of corals and sponges (VME indicator species) will be found.

As part of the management of high seas bottom fisheries, when VME indicator species are encountered the vessel must stop fishing and move some distance away from where the encounter occurred. This is referred to as the “move-on rule.” The problem, of course, is how to define an “encounter,” and then how to decide how far the vessel should move.

The first encounter rules established in the NE Atlantic were based on the predominant deep cold reef-building species Lophelia pertusa and the large and heavy globular sponge Geodia sp. Most seamounts, however, do not harbor massive reef building corals or very many dense heavy sponges, although there are a few species in both categories in selected areas. As a result, the encounter limits that have been established in most parts of the world will hardly ever be exceeded.

Indeed, in the South Pacific Regional Fishery Management Organization (SPRFMO) area, VME species were encountered only 4 times out of 255 trawl tows made on the Louisville Seamounts. Can this be right? A later series of camera tows on six of the Louisville Seamounts recorded the presence of a number of VME indicator species, especially gorgonian octocorals and sponges.

Close up image of a brittle star with arms wrapped around an octocoral. Image courtesy of the NOAA Okeanos Explorer Program.

Under SPRFMO rules, an encounter with a VME species would require the vessel to move 5 km away from the site of encounter. Since some VME species were spotted during almost every camera tow, and if a fishing vessel was required to survey an area where it wanted to trawl with a camera rather than wait to see what comes up in the net, there would be nowhere on the seamount where trawling could occur.

We can conclude a couple of things from this information. First, all seamounts that have so far be surveyed by cameras, either towed or mounted on steerable remotely operated vehicles have been found to have abundant VME indicator species distributed on their sides and summits. Second, the distribution of VME species is far more extensive than trawl data would suggest. The lack of VME species in trawl catches is due entirely to their fragility and brittleness. While some small pieces of encountered VME species might be retained in the trawl, the biomass would never be high enough to trigger an official “encounter” as most certainly must have been the case in the Louisville Seamount fishery.

The only rational decision, then, would be to stop worrying about VME indicator species, encounter and move-on rules, and accept the fact that seamounts are, in the language of United Nations General Assembly resolution 61/105, Vulnerable Marine Ecosystems. They are islands of biodiversity in an otherwise depauperate ocean, they are home to dozens of fragile and long-lived species who can easily be wiped out by the indiscriminate and heavy trawl gear. As true VMEs, they should be off-limits to bottom tending fishing gear and should be protected for all time from other forms of human disturbance, including the mining of crusts from some old seamounts.

Dr. Les Watling is a  professor in the Department of Biology at the University of Hawaii at Mānoa and a member of Marine Conservation Institute’s Board of Directors.

Rogers, A.D., Gianni, M. 2010. The Implementation of UNGA Resolutions 61/105 and 64/72 in the management of Deep-Sea fisheries on the high Seas. Report prepared for the Deep-Sea Conservation Coalition and International Programme on the State of the Ocean, London, United Kingdom

Featured image: A deep-sea red crab hangs out on a bubblegum coral. Notice a skate egg case on the same branch as the crab and a colony of the white morph of bubblegum coral in the background. NOAA Okeanos Explorer Program