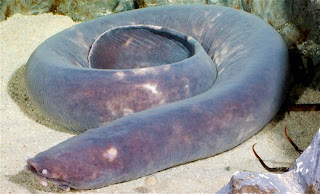 Just the name may make you quiver, but what hagfish (family: myxinidae) may lack in glamour is compensated for by their performance in nutrient recycling in an ocean ecosystem. Known for their ability to excrete exorbitant amounts of slime–not to mention their three extra hearts and one extra brain–this stomachless fish promotes the health of ocean communities by cleaning the sea floor of dead animal parts…what a job!

In areas of high fishing, and subsequent high bycatch, hagfish are especially important, as substantial quantities of dead fish float to the ocean depths. Commercial fish, such as cod and flounder, are examples of species that benefit from the rich environment hagfish help create.

As most stories go today, hagfish are experiencing high fishing pressure in many parts of the world. A recent study has estimated that 20% of their species are at risk of extinction! Of particular concern is Southern Australia, where the only species of Hagfish is threatened, while other areas are close to follow–the East China Sea, Pacific coast of Japan, and coastal Taiwan, IUCN reports.

Despite an appearance only a mother could love, the hagfish’s extinction would have a notable negative environmental impact on our oceans. In fisheries that target hagfish, for example, correlated decline in other commercial fish stocks have been documented.

So, the bigger question is, how do you conserve a fish that hides in the shadow of other, more vibrant, fish? To raise awareness is one way, but enforced action is also necessary. We need to identify the ecosystems that support threatened hagfish and regulate fisheries responsible for their decline. Unfortunately, having three extra brains is not enough for their survival at this point.

Photograph by Pady Ryan from IUCN