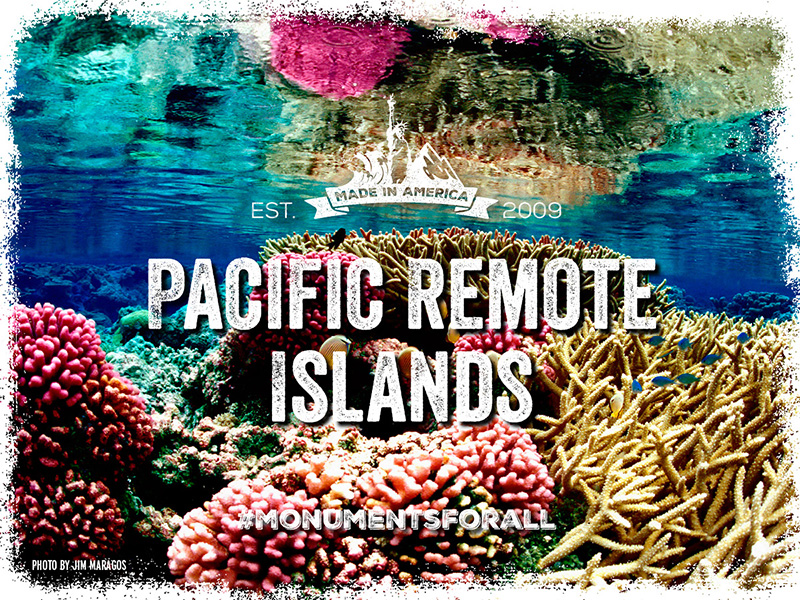 In April, President Trump issued executive order 13795 instructing Secretary of Commerce Ross to conduct reviews of certain marine monuments and marine sanctuaries. Nearly 100,000 public comments were submitted to the Department of Commerce during this period, of which 99% supported these blue parks protection. The Commerce Department sent its report to the White House today but has not released the report publicly or announced when it will. After complaining that the original process for designating the marine monuments was not public enough, the Trump administration has made its review of the monuments and sanctuaries behind closed doors.

Dr. Alan Friedlander, professor of marine biology at University of Hawaii and Chief Scientist of the National Geographic Pristine Seas Program, says that, “The U.S. Pacific Monuments represent some of the last intact tropical marine environments on earth and their continued protection will ensure that the entire ecosystem, from seabirds nesting on land to coral reefs and deep sea ecosystems, are preserved. These jewels not only serve as refuges for unique and irreplaceable biodiversity, but they can also help repopulate areas outside their borders that are subject to overfishing, pollution, and climate change.”

Dr. Jennifer Caselle, professor of marine biology at the University of California Santa Barbara, elaborated on the scientific importance of the Pacific Remote Islands Marine National Monument, “The Pacific Remote Islands provide a living laboratory for answering some of our biggest scientific questions around fisheries and coral reef health. These islands give scientists the ability to test hypotheses for mechanisms of coral reef resilience to climate change by removing one of the largest manmade stressors, fishing.  Reintroducing fishing will alter the food webs, remove top predators and thereby reduce our ability to test the important questions about climate change’s impact on coral reef health and persistence.”

Dr. Douglas McCauley, professor of marine biology at University of California Santa Barbara, said “The Pacific Remote Islands Marine National Monument includes some of America’s most pristine coral reefs and ocean ecosystems. Only 1.5% of our worldwide ocean is strongly protected today and our monuments are a significant portion of this figure. For scientists, this monument matters because it allows us to study how healthy oceans function. We have been taking lessons learned from within the monument and applying them to improve the health of impacted oceans ecosystems closer to home – ocean ecosystems that provide us with healthy food, prosperity, and inspiration. In possibly downgrading the protection of this unique monument, we are devaluing a critically important asset in America’s ocean wealth portfolio.”

Marine protected areas are one of the most effective conservation tools we have for building the overall resiliency of ocean ecosystems and fisheries in the face of degradation and climate change. Scientific literature has repeatedly shown that highly protected, no-take marine reserves are the most effective protected areas. As of 2017, only about 3% of the ocean is protected, and only about half of that is distinguished as highly protected, no-take area.

Dr. Lance Morgan, president of Marine Conservation Institute, concluded “Rolling back protections of existing marine monuments and marine sanctuaries would be the ocean equivalent to taking the U.S. out of the Paris Climate Agreement. It would end U.S. leadership in ocean conservation that has encouraged rapid progress on protecting the oceans’ most important places. How ironic that the administration is considering elimination of ocean parks while the rest of the world recently met at the Our Ocean Conference to announce hundreds of new commitments, including new marine protected areas, that will improve oceans and fisheries. This administration is clearly out of step with both the American public and the world on this issue.”

Marine Conservation Institute is a team of highly-experienced marine scientists and environmental policy advocates dedicated to saving ocean life for us and future generations. The organization’s goal is to help create an urgently-needed worldwide system of strongly protected areas—the Global Ocean Refuge System (GLORES)—as a strategic, cost-effective way to ensure the future diversity and abundance of marine life. To enhance marine protection efforts in the U.S. and around the globe, Marine Conservation Institute also built the world’s most comprehensive online marine protected area database, MPAtlas.org.