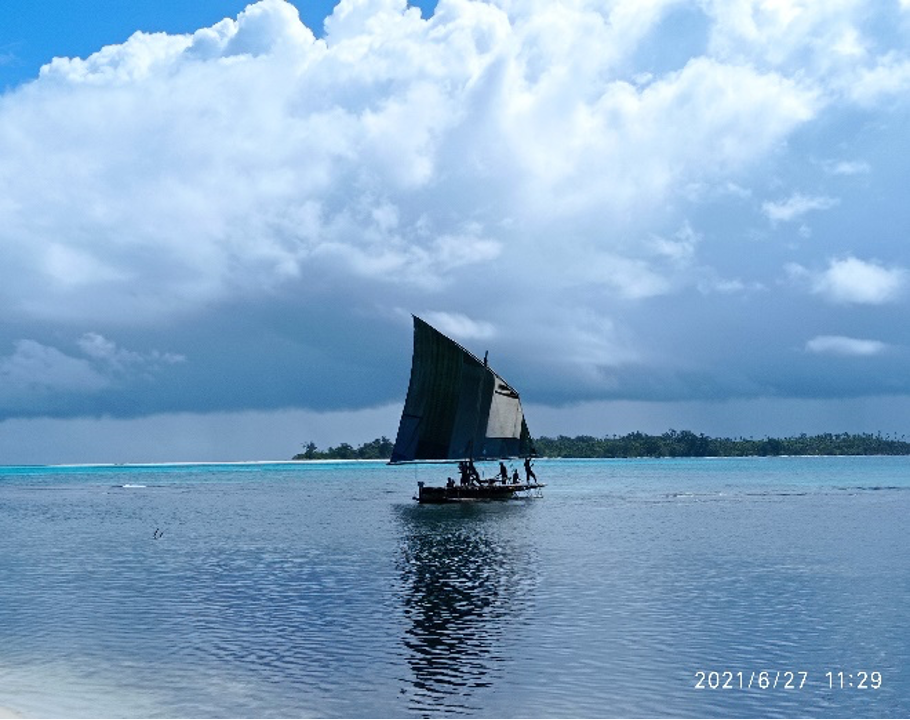 Hailing from Papua New Guinea, I am currently working with Marine Conservation Institute through a Community Engagement Exchange (CEE) Program sponsored by the US Department of State’s Bureau of Educational and Cultural Affairs. This program brings together young civic society change-makers from over 100 countries for a three-month fellowship with US-based host organizations to facilitate intercultural knowledge exchange. Back home, I am a director of the Sea Women of Melanesia organization, which is helping to make a difference for indigenous coastal and island peoples, especially by empowering women and girls to build resilient and sustainable communities while implementing climate adaptation and marine conservation strategies to support them for generations to come.

As an example of the impact that Sea Women of Melanesia makes for local communities, we turn to the small island of Tewa Tewa, a jewel nestled in the heart of the Engineering Group of Islands within the larger Louisiade Archipelago of Papua New Guinea’s Milne Bay province. This region forms a major part of the eastern coral triangle, one of the world’s last remaining reservoirs of rich marine biodiversity. Tewa Tewa Island covers barely 0.61 square kilometers with a population of 105 people1 and a matrilineal system of customary land tenure. This traditional of land ownership and stewardship gives women a relatively high status in their communities, who consequently are more involved in decision making as compared to women in patriarchal societies2.

The community of Tewa Tewa, like the surrounding islands of Kwalaiwa, Skelton and Tubetube, is heavily reliant on marine resources to sustain their livelihoods. Beche-de-mer (sea cucumbers) and trochus shells are some of the commercially important marine resources, however, the growing population of the surrounding islands has placed a huge demand on the exploitation of these marine resources. Furthermore, the impacts of climate change has already made life difficult within these vulnerable island communities.

Rising sea level has caused saline intrusion into the islander’s water wells dug in the sand. Water is an important but very limited resource on the island, and households are dependent on these sand wells. Scarcity of water on Tewa-Tewa has resulted in very few staple food crops being planted annually that can sustain the high temperatures and can thrive in such conditions. Broader climatic conditions drive water scarcity on the island, and small Island communities like Tewa-Tewa are the ones that suffer the most during periods of drought with very little to no relief or support from the local government.

During drought season, Tewa-Tewa Islanders must fish their reefs to exchange or trade with larger island communities for vegetables to survive. The people understand the value and importance of marine resources and why preserving their coral reefs through the creation of marine reserves is vital for their future.

Through the Sea Women of Melanesia training program more than 10 women in the Engineering group of islands including Tewa Tewa Island have been taught the skills to monitor their coral reefs. Long-term monitoring data is essential to make well informed decisions about the state of a reef and whether it is changing over time. This information is needed by these communities to better manage their marine resources and the sustainability and well-being of their community.

Within the Engineering group of islands a traditional conservation practice known as Gwala has been passed on from generation to generation to conserve biodiversity and is commonly practiced in most parts of the Louisiade Archipelago subregion. The practice involves a stick placed on the area in question as a symbol of restriction to stop any activity from occurring in that area3.

The Sea Women of Melanesia have assisted the traditional landowners and people of Tewa Tewa and the neighbouring islands to revive the traditional practice of Gwala in order to establish a network of locally managed marine protected areas that will not only conserve marine biodiversity but increase populations of harvested species for the surrounding communities. A Locally Managed Marine Area (LMMA) is an area of nearshore waters and its associated coastal and marine resources that is largely or wholly managed at a local level by the coastal communities, land-owning groups, partner organizations, and/or collaborative government representatives who reside or are based in the immediate area. An LMMA differs from what is commonly known as a Marine Protected Area (MPA) in that LMMAs are characterized by local ownership, use and/or control, and in some areas follows the traditional tenure and management practices of the region, whereas MPAs in the formal sense are typically designated via a top-down approach with little if any local input or authority4.

The Sea Women of Melanesia are also assisting these communities with humanitarian aid to support the conservation efforts and their resilience to climate change, including clean water and sanitation through a water tank installation project, medical aid delivery to the surrounding island communities of Tewa Tewa, Kwalaiwa, Wealoki, Skelton & Tube-tube, as well partnering with Days for Girls International to provide sustainable period kits to women on these isolated, remote islands that do not have access to menstrual health products.

With the designated Locally Managed Marine Area in place, a lot of changes have taken place in the Community of Tewa Tewa in the two years of working with the Sea Women of Melanesia. The reefs are teeming with life, and fish and sharks are returning to the coral reefs and lagoon. An active LMMA management committee has been formed which includes a combination of men, women, youths and church representatives. With the Tewa Tewa Island LMMA Management plan in place for submission with the government, the community of Tewa Tewa are looking at ecotourism opportunities to generate revenue which will in turn support community-led programs. With the recent visit of the Conservation and Environment Protection Authority of Papua New Guinea to Tewa Tewa island’s Locally Managed Marine Area, the community has high hopes that things will change for the better as they work together to protect the marine resources of their island home in the face of climate change impacts.

ShareLikeTweetLinkedInPin
Posted in Blog
← Meet the 2023 Blue Park Award nominees, and help us evaluate them!