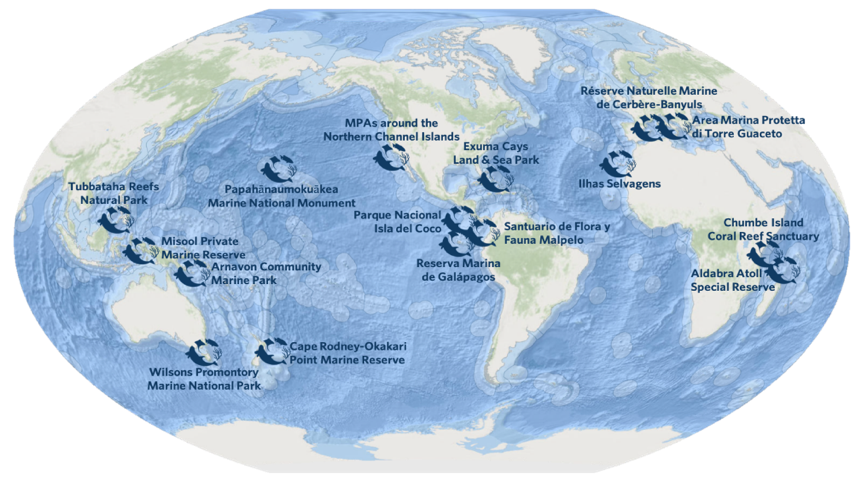 “Our goal is to recognize those MPAs that deliver on biodiversity conservation, really protecting our ocean environment and inspiring others around the world to strongly protect at least 30% of the ocean’s most important places by 2030,” said Dr. Lance Morgan, President of Marine Conservation Institute. “Blue Park recognition provides regional examples of successful efforts and serves as a road map for others as we strive to protect our oceans for generations to come.”

After months of rigorous review by Marine Conservation Institute and an independent scientific panel, today’s announcement welcomes the following Blue Parks to a growing network of global ocean refuges (See this link for detailed information on each Blue Park and the system of parks: https://marine-conservation.box.com/s/xfh3bs9tn0ydh2c45vkdzq5vrz367l7p.)

“Blue Parks are the antidotes to the barrage of threats to life in our oceans,” said Dr. Sarah Hameed, Senior Scientist of Marine Conservation Institute. “MPAs may not be able to stop climate change impacts immediately, but strong protected areas in the right places today will enable ecosystems to recover and build resilience for the future.”

An international council of marine scientists evaluates MPAs nominated for the Blue Park Award and determines which ones meet the standards. The Blue Park Award criteria are based on what scientists have learned about what works to safeguard marine ecosystems. The evaluation of each nominee includes location, design, management, regulations and compliance to select MPAs that effectively protect the world’s most valuable and critical ecosystems.

“This is a time of great peril for ocean life as it faces off against increasing marine industrialization and climate change,” said Professor Douglas McCauley of UC Santa Barbara, Director of the Benioff Ocean Initiative and a member of the international science council for Blue Parks, “Blue Park Awards are shining a light on protected areas that are leading efforts to protect marine biodiversity and help promote resiliency to climate change impacts.”

A growing number of countries and conservation organizations are encouraging the creation of hundreds of new protected areas to reach the world’s Sustainable Development Goal (SDG 14) of protecting 10% of our oceans by 2020 and the proposed goal of at least 30% by 2030. Marine Conservation Institute is working to ensure as many MPAs as possible meet the high conservation standards of Blue Parks.

“Many of today’s marine protected areas are not effectively protecting the best places,” continued Dr. Hameed. “They’re often ‘paper parks’ appearing to meet commitments but lacking substance. Achieving a Blue Park Award requires meeting science-based standards we know will protect the oceans for generations to come. If we elevate and bring recognition to Blue Parks, we believe it will encourage more countries and leaders to meet this critical standard going forward.”

Today’s 6 winners join 10 prestigious 2017 & 2018 awardees. The network now includes 16 Blue Parks covering 1,669,388 km2 or 644,404 mi2 of ocean (approximately the size of Alaska or Iran, or 3 times the size of Kenya). These outstanding marine protected areas are securing lasting protection for marine biodiversity and their hard-won recognition has already inspired others to work towards a Blue Park Award. Nominations for the 2020 awards can be made through mid-March. Visit blueparks.org to find out how your marine protected area can become a Blue Park.

Marine Conservation Institute works with existing and new MPAs to ensure they are well- designed, effectively managed, protect our oceans and deliver on their commitment to protect marine biodiversity for generations to come. MPAs that meet these standards can achieve a Blue Park designation, the highest award of conservation excellence.

Blue Park Awards were established by the Marine Conservation Institute to encourage governments to safeguard marine wildlife, secure critical habitats, promote resistance to climate change, and ensure the beauty of our oceans for future generations. The effort aims to assemble an effective network that protects and sustains marine life and habitats globally. Today there are 16 marine protected areas that have been awarded Blue Park status. In addition to awarding six new Blue Parks today, Marine Conservation Institute has launched collaborations with groups planning new marine protected areas in Argentina, Chile and Mozambique to ensure their efforts result in future Blue Parks.

Marine Conservation Institute, founded in 1996, works in the U.S. and globally to seek strong protection for at least 30% of the ocean by 2030—for us and future generations. Our focus on protecting the ocean’s most important places follows several lines of work: identifying and advocating for strong marine protected areas; improving laws and other tools to better conserve marine biodiversity; catalyzing effective conservation by recognizing and elevating the best marine protected areas as Blue Parks; and accurately reporting on conservation efforts with our Marine Protection Atlas (MPAtlas.org).