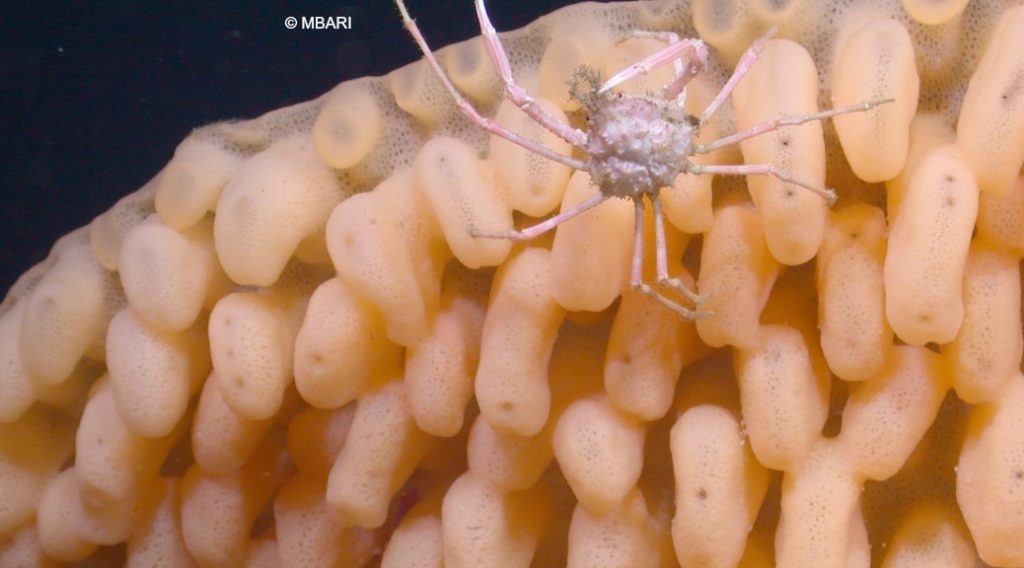 Beneath the deep waters off the coast of California exist submarine mountains that rise thousands of feet off the seafloor and harbor an incredible diversity of marine life. These underwater mountains are known as seamounts, classically defined as seafloor features that are taller than 1,000 m (3,300 feet), have steep sides and are roughly circular or elliptical in shape.1 The largest seamount in California waters is the Davidson Seamount, which stands at an astonishing 7,480 feet tall, while its summit is still 4,101 feet below sea level. Seamounts are typically volcanic in origin, formed by massive submarine lava eruptions. In many cases, these volcanic deposits once rose high enough to breach the surface and form islands (for example, the Hawaii islands), but later retreated beneath the waves due to erosion or subsidence. A recent geological assessment of nine California seamounts found that they primarily formed during volcanic eruptions occurring between 7 and 16 million years ago, with the most recent seamount forming just 2.8 million years ago.2  Globally, over 30,000 seamounts have been detected,3 while in California waters 56 seamounts have been identified within the exclusive economic zone (EEZ) that extends 200 nautical miles offshore (Figure 1).4,5 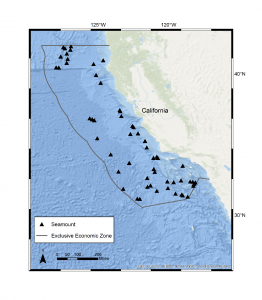 Seamounts are generally highly productive ‘oases’ in the deep sea, providing ecologically crucial habitats that support biodiversity hotspots throughout the world’s oceans. This enhanced diversity partially stems from the large effects that seamounts exert on local currents, resulting in reduced sedimentation rates, the upwelling of nutrient-rich water and a greater influx and retention of food.6 As a result, seamounts frequently harbor endemic species that do not occur in other marine environments; on average approximately 20% of seamount species are considered to be endemic to seamounts.7 A wide variety of organisms are associated with seamounts, including pelagic species such as tuna, sharks, billfish, seabirds, sea turtles and marine mammals, as well as benthic organisms such as cold-water corals and other invertebrates.8-14

While the California seamounts have not been thoroughly explored, the surveys that have been conducted revealed high levels of diversity. The Davidson Seamount alone is home to more than 25 species of cold-water corals (Figure 2), including bamboo corals over 200 years old.14-15 Other seamounts in the region support similarly diverse and unique communities; in a recent survey of three seamounts off the coast of central California 13 new invertebrates were discovered, including coral, urchin and sponge species.16 In addition to supporting extensive benthic communities, these seamounts have been shown to enhance aggregations of pelagic species including seabirds and cetaceans, likely attracted due to increased concentrations of prey items in the waters above seamounts.17 Sharks have even been shown to use the unique magnetic signatures of seamounts off the coast of California to navigate, supporting the idea that seamounts may act as critical resting, feeding and mating locations for top predators.18-19

Figure 2. A diverse cold-water community found on the Davidson Seamount off the coast of central California, credit: NOAA/MBARI

Despite their ecological importance, only 1.5% of seamounts around the world are located within marine protected areas, leaving the vast majority open to disturbance from human activities such as fishing and mining.3 If we do not act quickly to better safeguard these critical marine habitats, we risk causing extensive and potentially irrevocable damage – in many cases before we have even explored them.