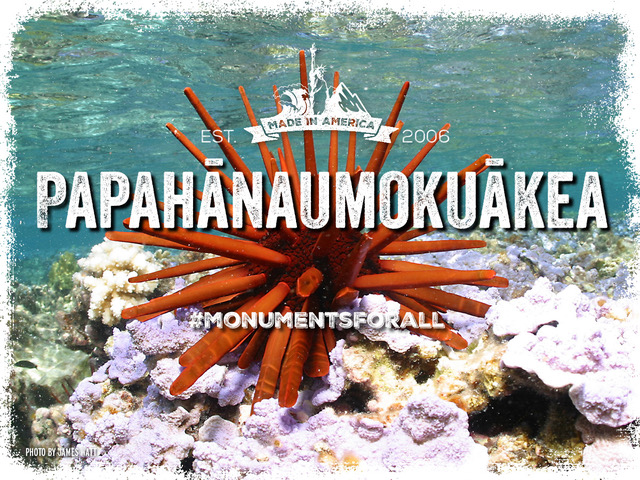 Washington, D.C. — Marine Conservation Institute, a leader in securing strong protection for the oceans’ most important places, today released a letter signed by 535 marine, climate and other scientists who fully support the creation of marine reserves because of the “important role that strongly-protected marine reserves play in conserving marine life and benefiting fish populations.”  In response to a recent Executive Order that questions the soundness of marine and land monuments established by both Republican and Democratic presidents, the scientists also “call on the United States government to maintain existing ocean protections and to increase protections for diverse habitats across all biogeographic regions of U.S. ocean waters.”

Today, June 15th, has special significance for marine monuments because eleven years ago today President George W. Bush created what was once the largest marine reserve on the planet –Papahānaumokuākea – in the northwest Hawaiian Islands. President Bush created Papahānaumokuākea Marine National Monument to restore and protect a vast area –over 140,000 square miles, an area the size of Montana—of biologically, historically and culturally important places in U.S. Pacific waters. The rare, endangered Hawaiian monk seal makes its home in these waters, the WWII Battle of Midway was fought and won there, and Native Hawaiians have deep spiritual connections to this chain of atolls, islands and reefs. Unfortunately, the current administration is seeking to roll back protections to allow for industrial extraction in our nation’s most treasured, culturally and ecologically significant natural areas that have been previously protected under the Antiquities Act.

Dr. Lance Morgan, president of Marine Conservation Institute said, “While the unprotected ocean is like a debit account where everybody withdraws and nobody deposits, marine reserves are like savings accounts that produce interest we can live off”, and added that, “Land and marine monuments have been established by Republican and Democratic Presidents for over one hundred years since Theodore Roosevelt created the first monument. They have given this country a legacy of conserving land and marine biodiversity, as well as local economies dependent on the conserved areas, that is unrivaled by most countries. Scientists and a majority of the public strongly oppose undoing that legacy.”

The scientists’ letter calls for strong protections for existing and future marine reserves and says, in part,

Dr. Mark Hixon, Professor &  Hsiao Endowed Chair, Department of Biology, University of Hawai’i said, “Papahānaumokuākea protects a broad variety of mostly unexplored shallow and deep-ocean ecosystems loaded with species found nowhere else on the Earth.  Saving this treasure trove for future generations is the right thing to do.”

Dr. Enric Sala, National Geographic Explorer in Residence and Director of the Pristine Seas Program said, “The science and the economics are clear: there is no future for ocean life, or for fishing, without strongly protected marine reserves.”

Dr. Ellen K. Pikitch, Professor and Executive Director, Institute for Ocean Conservation Science, Stony Brook University said, “Marine reserves will work best when they are designed and implemented based on the best available scientific understanding.  Science has indisputably demonstrated that full or strong protections are essential for effective marine reserves.”

Dr. Jon D. Witman, Professor of Ecology and Evolutionary Biology, Brown University said, “Although environmentalists and fishermen differ in the type of management they advocate for, they both want the same thing – a healthy functioning ocean with lots of species in it that can sustain fisheries.  Providing permanent protection for marine life in marine national monuments is a win-win for all sides because it safeguards natural capital and healthy ecosystem functioning. To lose the hard-won protection already achieved by the establishment of the U.S. marine monuments by repeal or restriction of the Antiquities Act would be a huge step in the wrong direction.”

The letter will be submitted today to members of the U.S. Senate Subcommittee on Oceans, Atmosphere, Fisheries, and Coast Guard and all Members of the U.S. Senate Committee on Commerce, Science, and Transportation. It will also be submitted to Secretary of Interior Ryan Zinke and Secretary of Commerce Wilbur Ross, who will be making recommendations to the president about whether to remove monument status from these areas, shrink boundaries or weaken current protections. None of these actions would be consistent with the extensive scientific background provided by scientists at the time of monument designation, the letter signed by over 500 scientists, or the extensive public support the monuments received before designation.

For more information on Marine Conservation Institute and the Scientist Letter, go to: