Ten years ago this month in January 2009, President George W. Bush designated a small island and coral reef system in American Samoa a marine national monument, called Rose Atoll. It is named so after its rosy pink corals. The monument protects 10,000 square miles of ocean from any commercial fishing or other extraction. Since that January in 2009, the rest of the oceans and the marine life that live in them have negatively changed in many ways. In comparison, little, highly protected, and remote Rose Atoll, has barely changed at all. To borrow the famous description of a quirky movie character: ‘Rose Atoll abides’.

In the post-industrial era, human activities have released over 2,040 gigatonnes of CO2 into the atmosphere. Since the creation of Rose Atoll national monument in 2009, this has resulted in an increase of concentration of atmospheric CO2 from an average of 386.29 ppm in 2009 to 405.2  in September, 2018 (Ed Dlugokencky and Pieter Tans, NOAA/ESRL). As a result, ocean waters are becoming warmer, more acidic, and less oxygenated. The oceans have warmed by an average of 0.13 degrees Fahrenheit per decade, and surface pH is falling at a rate of approximately 0.02 pH units per decade (Santana-Casiano et al., 2007). These may not seem like big changes but they are global and are occurring at a much faster rate than has ever occurred in Earth’s history (Zebe et al. 2012). By the year 2050, it is expected that oceanic pH levels will be lower than they have been in the past 20 million years (Turley et al. 2006). Despite these threats to ocean health, over 33% of major commercially fished species are now being fished at biologically unsustainable levels, compared to just 10% in 1974 (FAO 2018). The future of sustainable fisheries looks bleak as newly developed countries like China and others have ramped up fishing efforts to feed growing populations who want to eat more seafood – an 18% increase in global fisheries and aquaculture output is expected by the year 2030 (FAO 2018). Around the world, we see increasingly frequent coral bleaching and red tide events, resulting in larger and more persistent dead zones with little oxygen for marine life. But Rose Atoll, sitting in the middle of the Pacific Ocean,  the only US territory in the southern hemisphere, has changed little. Monument protections have allow marine life to thrive, and the reef continues to recover from a 1993 fishing vessel grounding that spilled thousands of gallons of fuel and chemicals. 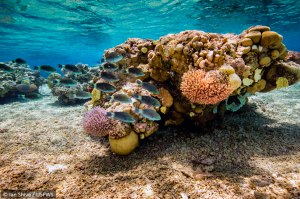 Rose Atoll still sports healthy levels of corals, large fish populations, lots of top predators like sharks, breeding seabirds, and a wide diversity of species. Threatened Green sea turtles continue to nest on the island every year after swimming thousands of miles to lay their eggs in a safe place. Several hundred thousand seabirds of over a dozen species continue to use Rose Atoll as a home or a place to nest and raise their young, free from the predation of rats and disturbance from humans. Every year, healthy corals and fish populations release billions of larvae into the ocean around Rose Atoll that replenish coral reefs and fish on the other islands of American Samoa. And, every year since 2009, American Samoans on other inhabited islands over 80 miles away have continued to fish and collect marine life to sustain themselves.  This would not have been possible without the protection of Rose Atoll and repopulation of marine life.

Each year, scientists from NOAA and the US Fish & Wildlife Service, survey the wildlife on the island and marine life in its surrounding waters to see how a near pristine ecosystem functions in a world where the climate is rapidly changing. What they are finding is that Rose Atoll, with no fishing or other extraction, is more stable and healthy than other islands where fishing and extraction are rampant. Scientists think that this kind of protected environment with no extraction will be more resilient to the ill effects of climate change. That, in reality, may ultimately depend on how severe the change is and how slowly and gently it arrives. Will this continue to be the case as ocean temperatures and severe storms intensify? We certainly hope so, but there is no guarantee. 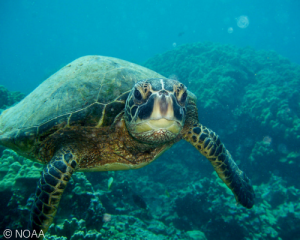 In the meantime, the world needs protected places like Rose Atoll and Pacific Remote Islands Marine National Monuments to serve as natural benchmarks that show us how much things are really shifting in the rest of the ocean. We need Rose Atoll and places like it, to investigate and understand the impacts of climate change, separated from other human impacts. Ultimately, we need to conserve places like this in a sea of change to show us what the world could and should be in the future.