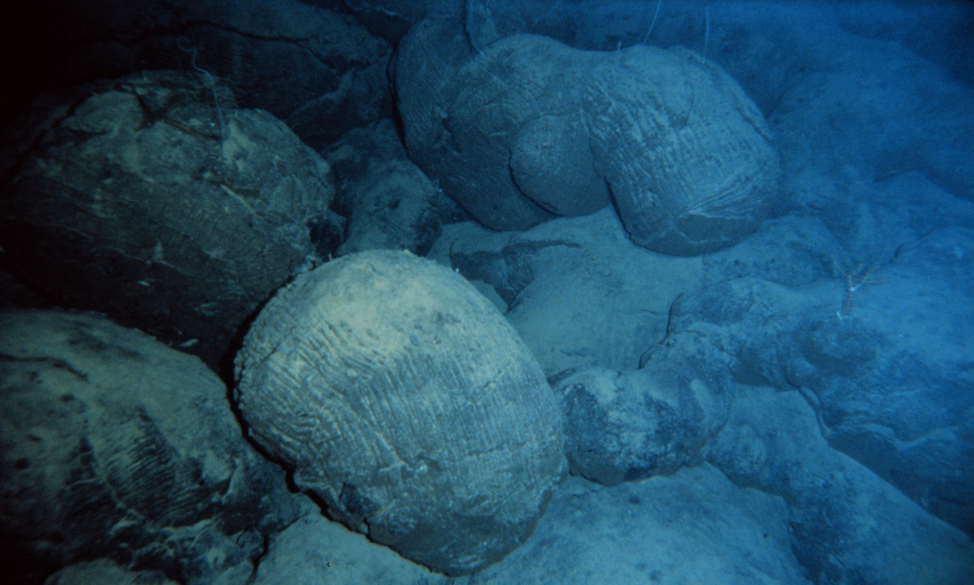 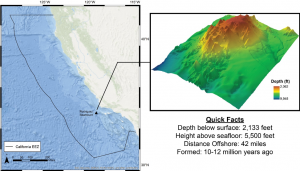 Rodriguez Seamount is a 10–12 million-year-old seamount located approximately 42 miles off the coast of southern California. It towers over a mile above the seafloor, with its tallest summit cone standing over a little over 2,000 feet below the surface. Once upon a time, Rodriguez was an island standing as tall as 230 feet above sea level, with an area of 2.6 square miles. Like the neighboring San Juan Seamount, it has since sunk back beneath the waves largely due to the subsidence of the ocean crust beneath it. Due to the erosional forces it was exposed to as an island, its modern summit largely consists of a large flat dome, qualifying Rodriguez as a guyot – a flat-topped seamount. Guyots, named after the Swiss geographer Arnold Guyot, are relatively rare in our oceans – scientists estimate that there are almost 10,000 seamounts, but only 283 guyots.

How do guyots – or any seamounts – form? The process generally takes millions of years and involves a complex series of geologic events. Seamounts typically follow a geologic pattern of initial growth, subsequent volcanic activity, subsidence (sinking), and eventually extinction (cessation of volcanic activity). The growth of a seamount can stem from a variety of types of volcanic activity. At oceanic spreading centers where tectonic plates are diverging apart from each other, magma escapes and cools in the cold seawater, creating submarine volcanic rock formations that grow larger with each subsequent eruption. Other seamounts commonly form near subduction zones, where tectonic plates are converging and one plate slides under the other. The subducted plate begins to melts as it moves towards Earth’s hot interior (our planet’s core clocks in at a whopping 10,800°F – as hot as the surface of the sun), creating hot magma that bubbles its way up to the seafloor, erupting and giving birth to a seamount.

While seamounts are commonly found on the intersection of tectonic plates, some form within single plates. These intraplate seamounts typically form at hotspots, areas were super-hot magma plumes burst through the oceanic crust. The Hawaii Islands and accompanying seamounts formed this way, with new islands forming in a line as the Pacific plate slowly (only 3-4 inches per year) drifts over a hotspot. Rodriguez Seamount is another example of an intraplate volcano. However, it is a very rare type of intraplate seamount that did not form over a hotspot. Instead, it is believed to have formed when magma forced its way through ancient spreading centers in part due to decompression melting, a process in which the Earth’s mantle melts as it moves upwards through the crust due to rapid decreases in pressure. Rodriguez was volcanically active for around 2 million years as it formed, with evidence suggesting that its more recent eruptions occurred in shallow water. Like other guyots, the erosional forces of wind and waves scoured the summit into a flat top prior to its subsidence back beneath the waves, producing the flat, sandy dome observed today. 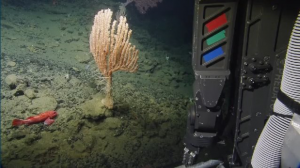 Like other seamounts, Rodriguez is home to an astonishing variety of marine life. Expeditions to the seamount have uncovered a plethora of organisms including sponges, crinoids, brittle stars, anemones, sea urchins, sea cucumbers, worms, crabs, 20 fish taxa, and 26 species of corals including massive bubblegum (Paragorgia) and bamboo (Isidella) colonies. However, the summit of Rodriguez is notably less diverse than neighboring seamounts. In part, this is likely due to the fact that the summit lies within the oxygen minimum zone, where extremely low oxygen concentrations may prevent many species from thriving. Its unique morphology as a guyot may also be to blame. The flat, sandy dome of Rodriguez Seamount lacks the rocky habitats that many corals, sponges, and other benthic species require. However, it is the perfect environment for sea cucumbers, the dominant animal group on the summit. Sea pens, one of the few deep-sea corals that are able to grow in sand and mud sediments, are also abundant on the summit.

Despite the low diversity of the summit of Rodriguez, the seamount on the whole still houses an incredible array of organisms, with 133 taxa identified in one expedition alone. In 2004, a new octocoral species Gersemia juliepackardae was discovered on the seamount, and in 2008 the bamboo coral Isidella tentaculum was described based on observations from both Rodriguez and Pioneer Seamounts. These observations continued the long tradition of species being discovered on seamounts – in one study, 29–34% of identified seamount species were new to science! It is imperative that we enact protection for vulnerable seamount habitats now, or we run the risk of destroying species before they are even discovered.