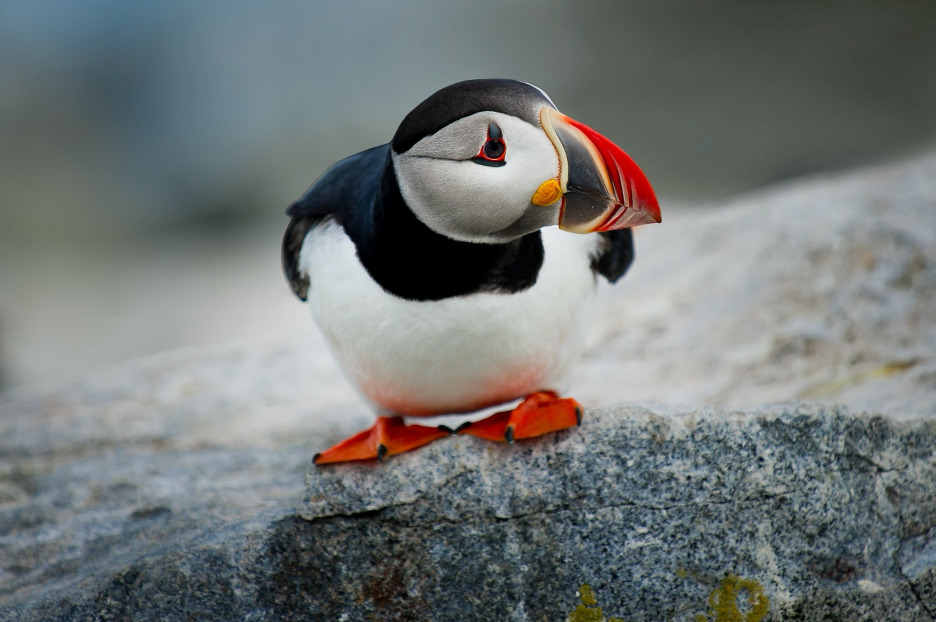 The Atlantic puffin (Fratercula arctica) is a striking bird, at times referred to as the clown of the sea due to its unusual facial appearance. These seabird’s boldly-colored beaks serve a dual purpose: attracting mates during their breeding season, and holding on to the small fish (typically around 3 inches long) that these predators hunt in the ocean. Although fairly awkward on land and in the air, puffin bodies are well suited to diving under the surface to search for prey. They use their short, stubby wings and broad, webbed feet to rapidly propel themselves through the water in search of fish and other food. Special hinges in their mandible, along with serrations along the beak, allow them to catch and hold multiple fish in a single dive. While they spend long periods of time at sea, puffins rely on terrestrial habitats to raise their chicks, typically laying a single egg at the bottom of a burrow dug several feet into the earth. Puffins usually mate for life, and take turns guarding their burrow while the other parent hunts. These dutiful parents will feed and guard their young until they are fully fledged (taking around 45 days) and ready to fly off on their own.

Atlantic puffins in the United States were effectively locally exterminated by overhunting and the introduction of predators to the islands where they breed, with the complete loss of most nesting pairs by 1885. In 1973, the National Audubon’s Project Puffin reintroduced this iconic species to their previous breeding colonies on a series of small islands off the coast of Maine. The project transplanted young puffins (called pufflings) from a large colony in Newfoundland to artificial sod burrows, and painstakingly reared them on vitamin-fortified fish. When the pufflings fledged, the project hoped that they would – as most puffins do – return to their island of ‘birth’ once they reached a reproductive age. After spending 2-3 years at sea, many of these reintroduced birds did indeed return to the islands. They were aided by wooden puffin decoys deployed to dupe the birds into gauging that the islands were safe places to land since there were already other ‘puffins’ present. Today, there are more than 1,000 breeding pairs of puffins that return to the islands each year.

Unfortunately, puffin populations in Maine are once again under considerable threat. Rising temperatures off the coast of Maine have recently led to a cascading series of ecosystem changes, resulting in a lower abundance of the small fish that puffins rely on to survive and successfully fledge their chicks. Puffins invest considerable time and resources into their chicks, and typically successfully fledge their pufflings around 77% of the time. In years with warmer coastal waters, researchers at Project Puffin saw this number drop as low as 10%. Scientists monitoring the Maine populations also saw an uptick in parents bringing their chicks the wrong kind of fish like this butterfish that is simply too big for their chick to eat in this heartbreaking video.

Their preferred prey items – often smaller and nutrient rich hake and herrings – are getting harder and harder to catch as these fish move to deeper, more offshore waters to escape the heat. Pressure from commercial fisheries also reduces the amount of high-quality prey available for puffins, with over 1.5 billion herrings removed from New England waters each year. Puffins aren’t the only species at risk – scientists have also observed fewer endangered northern right whales in the Gulf of Maine, as they too move farther offshore in search of food.

A struggling puffling is given supplemental fish from Project Puffin researchers to increase its chance of successfully fledging. Courtesy of Samuel Georgian.

Seamounts, massive underwater volcanoes, may seem like unlikely habitat for puffins. However, the seamounts off the coast of New England provide critical foraging habitats for a number of seabird species, as well as a wide array of other marine life including corals, sponges, and marine mammals. Due to their large size, seamounts exert large effects on ocean currents, frequently resulting in the concentration of nutrients, food, and plankton above them. As a result, the waters overlying seamounts are often fertile oases with higher than normal productivity and a significantly higher species diversity within 25 miles of their summits. The enhanced productivity and retention of food sources above seamounts appears to favor species at higher levels in the food chain, resulting in large aggregations of open ocean predators, including seabirds like puffins.

In 2011, tracking devices attached to puffins revealed that Maine puffins rely on the New England seamounts (protected since 2016 by the Northeast Canyons and Seamounts Marine National Monument) as their winter home after the breeding season ends. The puffins likely return to this area each year due to its productive upwelling of cold, nutrient rich waters that brings abundant food into the region. These waters also attract a multitude of other ocean life, including tuna, sailfish, dolphins, whales, and other seabirds. The seamounts, along with nearby deep canyons, also support extensive benthic, or bottom, life including a colorful and diverse array of deep-sea corals and sponges.

In 2016, President Obama designated the Northeast Canyons and Seamounts Marine National Monument as the first marine monument in the Atlantic Ocean, protecting an area of ocean covering almost 5,000 square miles (approximately the size of Connecticut). The proclamation safeguarded this critical area from harmful human activities, ensuring that this important foraging ground will be left intact for puffins and other marine life. Unfortunately, in June 2020, President Trump issued an executive order that reopens the monument to commercial fishing, threatening the puffins and other marine life that rely on this critical habitat. We urgently need to restore strong protection for the marine monument in order to ensure that the beautiful puffins are not lost forever. Sign this petition to save the Northeast Canyons and Seamounts marine monument.