“Planet at a Crossroads” was the theme that guided the dialog of over 9,000 conservationists last week at the International Union for the Conservation of Nature’s World Conservation Congress. For ten intensive days, attendees collaboratively discussed the issues of their respective fields, energized by the rare opportunity to work as a global community to address the most pressing environmental challenges facing our planet.

The state of our ocean, increasingly impacted by human activities, was a central focus of the Congress. Marine-themed dialog and sessions spanned a myriad of issues: climate change and ocean acidification; overfishing; coastal development leading to habitat loss; land-based pollution; marine debris; and the looming potential of deep-sea mining. Armed with science-based solutions such as marine protected areas (MPAs), ocean experts worked diligently to craft innovative IUCN motions to guide and enhance marine conservation over the next two decades.

Motion 53, put before the World Conservation Congress, built upon the recommendation of participants in the Marine Cross-Cutting Theme at the 2014 IUCN World Parks Congress to “urgently increase the ocean area that is effectively and equitably managed in ecologically representative and well-connected systems of MPAs or other effective conservation measures. This network should target protection of both biodiversity and ecosystem services and should include at least 30% of each marine habitat.”

World Conservation Congress participants discussed this recommendation in great detail and, on the last day of the Congress, passed Motion 53 by an overwhelming majority to include at least 30% of each marine habitat in a network of MPAs with the ultimate aim of creating a fully sustainable ocean, at least 30% of which has no extractive activities. In the days leading up to the vote, Marine Conservation Institute staff worked collaboratively with our colleagues in the NGO and conservation community to communicate the scientific importance of this motion to IUCN members and State representatives. 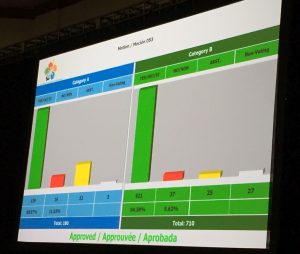 Motion 53 passes by an overwhelming majority!

Protecting 30% of each marine habitat is essentially impossible without the ability to protect the high seas that cover 43% of the Earth’s surface. At present, we lack a mechanism to protect areas of the ocean beyond national jurisdiction. Thus, Marine Conservation Institute ardently supported IUCN Motion 49 that urged States to promote the development of a new international and legally binding instrument for the conservation and sustainable use of marine biological diversity in the high seas. Motion 49 was also passed by an overwhelming majority.

We also shared the importance of a strong, representative network of MPAs at our exhibition booth that focused on the Global Ocean Refuge System (GLORES), the institute’s largest initiative that aims to catalyze protection for at least 30% of the ocean by 2030. We were blown away with the optimism for MPAs and enthusiastic interest in GLORES. 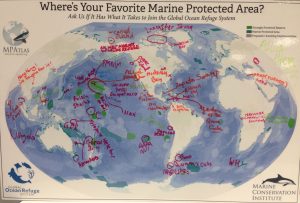 We asked IUCN World Conservation Congress participants where in the world their favorite MPA is and discussed what qualities make it eligible for the Global Ocean Refuge System.

The adoption of Motions 53 and 49 by the IUCN marks a significant milestone in marine conservation.  The Union, meeting once every four years to guide conservation efforts needed to safeguard our planet, is the world’s leading conservation voice. The IUCN is a well-established and highly-respected by international decision makers, placing this body in a position to positively affect change for marine life in desperate need of stronger protection.