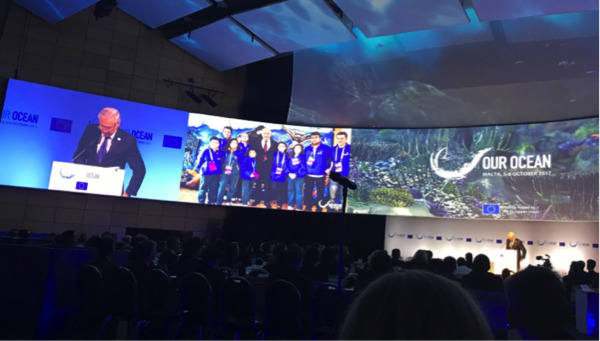 Since the first Our Ocean in 2014, these annual conferences have brought together the world’s ocean leaders, scientists and conservation practitioners to transform pressing challenges into change. Its key areas of action include sustainable fisheries, pollution, climate change and marine protected areas (MPAs). With each ocean issue, it facilitates tangible and measurable commitments that build towards solutions. Our team was thrilled to attend Our Ocean 2017 and educate conference-goers on MPAs and our major initiatives – the Global Ocean Refuge System (GLORES) and MPAtlas.org – through an interactive white table display. 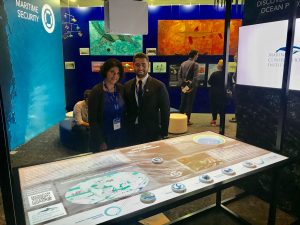 Our Ocean attendees that visited our white table explored MPA history, watched informative videos, and learned more about our work. Because the visualizations and text were based on MPAtlas data, which is lauded for its honesty and accuracy, our display offered a real view of marine protection today and where it can go through initiatives like the Global Ocean Refuge System. By describing GLORES and its science-based standards, we showed a positive way to combat challenges like fisheries decline. Our staff also engaged many attendees, including Prince Albert II of Monaco. 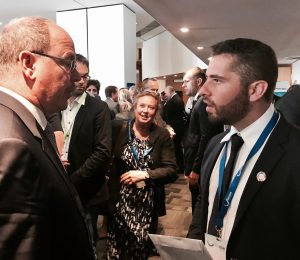 It was wonderful to see new MPA announcements come from the conference as well. Most notably, Chile continues taking bold steps for marine protection. Reiterating and expanding their MPA announcements at IMPAC4 last month, they announced three new reserves at Our Ocean: one protecting giant kelp forests around the Diego Ramírez Islands and Cabo de Hornos, one expanding protection near the rich, biodiverse Juan Fernández Islands, and another protecting Seno Almirantazgo (Admiralty Sound) in Tierra del Fuego. Including their previous commitments, such as the Rapa Nui Rahui marine protected area, around 46% of Chile’s Exclusive Economic Zone (EEZ) is scheduled for protection in some form. Niue and Mexico similarly used Our Ocean to make a huge MPA splash.

Niue, a small South Pacific island nation, will turn 40% of its EEZ into a large-scale MPA over the next three years. This reserve includes their island’s territorial seas, rich seamounts and Beveridge Reef, a submerged atoll thought to have the world’s highest density of grey reef sharks. Mexico announced that it will expand the Revillagigedo National Park and ban fishing and resource development in the area. This MPA encompasses the Revillagigedo Islands, themselves a UNESCO World Heritage site, and will protect renowned shark and manta ray habitat. National Geographic’s Pristine Seas initiative helped guide the development of these MPAs and also used Our Ocean to make a statement for marine protection.

The Pristine Seas Initiative presented its Malta Declaration at the conference, with support from several GLORES Science Council members. We have collaborated closely with Dr. Enric Sala and his address to the conference relied upon MPAtlas.org data to illustrate how the inclusion of MPAs that are designated but unimplemented overestimates current protections on the water where it counts. Because many implemented areas do not offer full protections, less than 1.5% of the global ocean is strongly protected today. Dr. Sala also asserted that the term “MPA” is overused and that marine protected areas should include verifiable ocean protection. They called on nations to create, implement, and enforce real MPAs in their EEZs and on the high seas. As nations hopefully heed this powerful message, MPAtlas will continue showing “true” marine protection. Given this year’s successes, the Our Ocean conferences will keep our staff busy!

Our Ocean 2017 resulted in over 400 measurable commitments, $8 billion in financial pledges for marine conservation and 2.5 million km2 of new MPAs. Indonesia will host next year’s conference, followed by Norway and Palau. After this year’s incredible energy and momentum, we can’t wait to see what these events have in store. Each one offers us another chance to educate and inspire, to connect and create, to protect our ocean’s wildest places.

Support our work on MPAtlas!