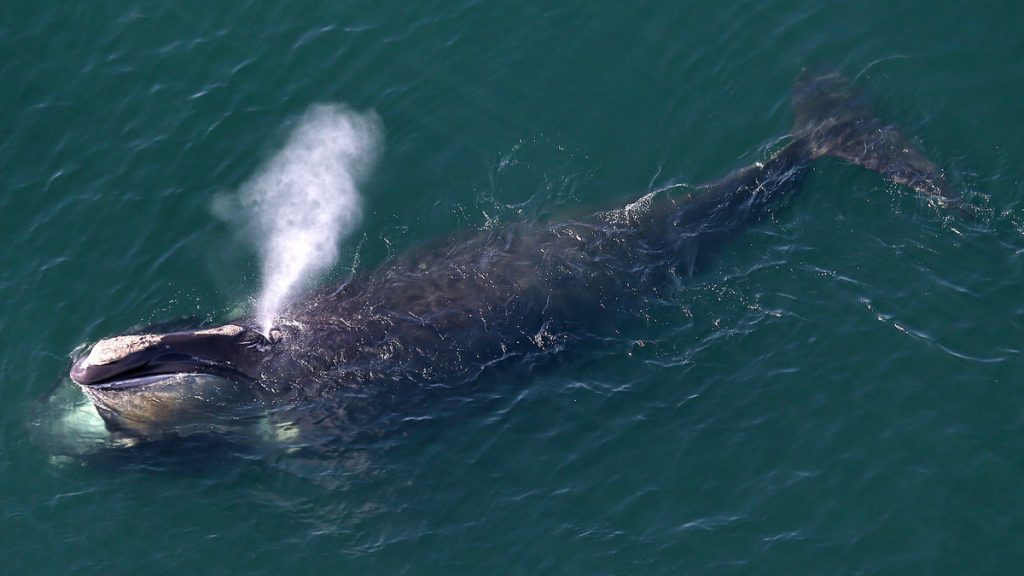 Earlier this month, the International Union for the Conservation of Nature (IUCN) announced that the North Atlantic right whale (Eubalaena glacialis) was moved from Endangered to Critically Endangered status on the IUCN Red List.[1] Less than 250 mature whales remain after a decade of continual population decline, with particularly elevated deaths since 2017.  These extra deaths have been declared an Unusual Mortality Event (UME) by the National Oceanic and Atmospheric Administration (NOAA).[2] According to NOAA’s UME report, 41 North Atlantic right whales have been removed from the population since 2017 – 31 of which were documented as dead, stranded whales and 10 seriously injured whales, indicating that a whale is likely to die from its injuries.[3] Representing approximately 10% of the population, the UME has had a significant impact on this critically endangered species.

Human activities are undoubtedly to blame for the North Atlantic right whale’s decline. The whales were hunted extensively for centuries before commercial whaling ceased. Although their population initially started rebounding after the whaling moratorium, in the past decade, increasing human activity on the water has changed the population’s trajectory.

Inhabiting the bustling, crowded waters along the US and Canadian Atlantic coast, these impressive creatures face increased mortality primarily due to entanglement in fishing gear and vessel strikes.  Shifts in the distribution of zooplankton, their primary food source, due to climate change have also contributed.[4],[5],[6] Research indicates that more than 8 of 10 right whales have been entangled in fishing gear at least once and roughly 60% have been entangled more than once.[7] In the North Atlantic, lobster and crab pots, which use heavy vertical ropes to connect pots on the seafloor to buoys on the surface, are the culprit for entanglement. Even if getting tangled in fishing gear is not fatal, dragging heavy ropes around has significant costs. A recent study found that North Atlantic right whales are in worse body condition than their close relative, the southern right whale, as dragging heavy ropes costs energy, causes stress, and can lead to injuries and infections.[8]

Despite the obvious, urgent need to protect this species, the United States government has repeatedly stalled decisive action (e.g. S.2453 – the SAVE Right Whales Act[9]) to save the whales and recently was sued for violating the Endangered Species Act by failing to protect North Atlantic right whales[10]. Last month, President Trump actively increased threats to North Atlantic right whales by issuing an executive order that eliminates restrictions on commercial fishing in the Northeast Canyons and Seamounts Marine National Monument, which includes important habitat for the whales and was originally created by President Obama in 2016.[11]

The first and only marine national monument and highly protected area in the Atlantic Ocean, the Northeast Canyons and Seamounts Marine National Monument is located approximately 130 miles east-southeast of Cape Cod and protects undersea canyons and seamounts that contain rich biodiversity, including deep-sea corals, several endangered whales (including the North Atlantic right whale), sea turtles, and a vast array of other species.[12] Complex currents and topography in the monument create an upwelling of nutrients that supports an abundance of zooplankton, food for right whales and the base of the food chain for other marine life. This creates a biological hotspot and an important feeding ground for many species.[13],[14] North Atlantic right whales migrate through and feed off the coast of New England each year.

When he issued his recent executive order on the Northeast Canyons and Seamounts, President Trump  claimed he was dismantling ‘needless’ protections to support fishermen, livelihoods, and the economy, but the facts tell a different story. The vast majority of lobster fishing occurs in state waters (up to 3 miles from shore), while the Northeast Canyons and Seamounts Marine National Monument is about 130 miles offshore in federal waters. The red crab fishery has only three active operators, and they concentrate their activity south and west of the monument.[15] Likewise, the monument only impacts five permitted vessels, or 0.05%, of the American lobster fishery.[16] These fisheries also have yet to be impacted at all by the monument, as they received a specific accommodation to continue fishing in the monument for up to seven years after its designation.[17] In addition, monument designation even has potential to increase fisheries revenue outside its boundaries due to increased biomass and spillover from the protected area.

We believe that President Trump is putting on a show to score political points with conservative voters rather than creating tangible economic benefits for fishermen – benefits they need.  His decision only hurts fragile ecosystems and species, including the critically endangered North Atlantic right whale.

Scientists and conservationists have not given up and continue to fight back against political and industry interests. The Conservation Law Foundation, Natural Resources Defense Council, and Center for Biological Diversity are currently suing the Trump Administration for illegally dismantling the only meaningful protections for the marine national monument.[18] Pew Charitable Trusts also recently petitioned Commerce Secretary Wilbur Ross, for immediate action to protect more New England ocean habitat from high entanglement gear like lobster and crab traps.[19]

At Marine Conservation Institute, we identify, advocate for, and support highly protected marine protected areas like the Northeast Canyons and Seamounts monument. Scientific evidence indicates that at least 30% of the ocean must be fully or highly protected to sustain biodiversity to prevent ecological collapse.[20] We are running out of time to save the North Atlantic right whale; we must stop moving backwards with decisions like undoing the sanctuary offered by the Northeast monument. The actions we take in the next decade will be critical to sustaining life on Earth and in the ocean.