Modeling Can Help Us Explore—and Save—Marine Life on Underwater Mountains, According to a New Scientific Report

The research was carried out in collaboration with the Coral Reefs of the High Seas Coalition, a global alliance that aims to protect coral reefs in areas beyond national jurisdiction, also known as the high seas. Despite significant threats from overfishing, destructive bottomtrawling, pollution, climate change, and seabed mining, only 1.2% of the high seas is currently protected, and one half of that is protected minimally, leaving coral reefs and other sensitive habitats at risk of being irrevocably damaged. Since the high seas covers such a large area – more than 60% of the ocean’s surface – it is critical to understand which areas should be prioritized for protection. Habitat and species modeling can help scientists do that cost-effectively.

Georgian, lead author of the study said, “Species distribution modeling is a critical conservation tool that allows scientists to identify and prioritize key biodiversity hotspots in remote parts of the ocean that humans have never explored in person. “

The study used a statistical method known as species distribution modeling to predict the location of stony corals, glass sponges, and demosponges, organisms that are considered top conservation priorities globally because they create habitat for a high diversity of other species.

“These species are much like the redwood trees of the ocean” said Daniel Wagner, technical advisor of ocean science at Conservation International and co-author of the study. “they are not only slow-growing, long-lived, and found only in a limited area, but they also provide critical habitats for a multitude of other species.”

Species distribution modeling allowed the authors to predict where highly diverse habitats are likely to occur along the high seas portion of the Salas y Gómez and Nazca ridges, even in areas that have not yet been explored with cameras or submarines. The study revealed that nearly all seamounts along the ridges contain highly suitable habitat for deep-water corals and sponges, providing “new evidence which confirms that these seamount ecosystems are in dire need of protection – now, before it is too late,” said Georgian.

It is difficult to enact strong protections for high seas areas like the Salas y Gómez and Nazca ridges, in part due to a lack of seafloor surveys. In this case, our study reveals that the science is clear – the ridges provide crucial habitat for ecologically vital species. It is imperative that we act quickly to protect this biodiversity hotspot before it sustains significant damage from human activities. 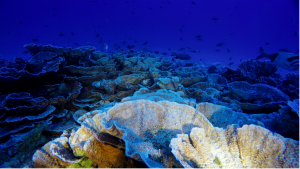 Coral reef off Rapa Nui on the western edge of the Salas y Gómez Ridge. Image courtesy of Matthias Gorny, Oceana, and ESMOI. 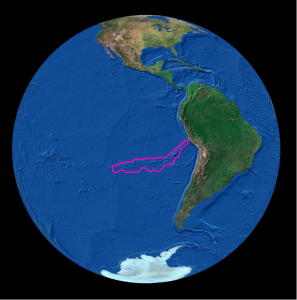 Marine Conservation Institute, founded in 1996, works in the U.S. and globally to seek strong protection for at least 30% of the ocean by 2030—for us and future generations. Our focus on protecting the ocean’s most important places follows several lines of work: identifying and advocating for strong marine protected areas; improving laws and other tools to better conserve marine biodiversity; catalyzing effective conservation by recognizing and elevating the best marine protected areas as Blue Parks and Blue Sparks; and accurately reporting on conservation metrics with our Marine Protection Atlas (MPAtlas.org).