From shower gel to food packaging, plastic is globally pervasive. We are now finding our plastic waste in places we never intended, such as our oceans. A recent study published in Science estimates that, in 2010, between 10.5 and 28 billion pounds of plastic entered the oceans. That’s equivalent to five plastic grocery bags filled with plastics for every foot of coastline on the planet. It is estimated that the world has undergone a 620% increase in plastic production in the past 40 years. As the global population continues to increase, the quantity of plastic waste available to enter the ocean is predicted to increase 10 times by 2025.

Our planet now hosts an 8th, informal, continent: the Great Pacific Garbage Patch. This collection of marine debris in the North Pacific Ocean extends from the West Coast of North America to Japan and is comprised mostly of plastic. While marine debris is largely concentrated in this area, scientists have found debris in every region of the oceans, from the Southern Ocean to the ice-covered Arctic. And the impact on marine life has been devastating. 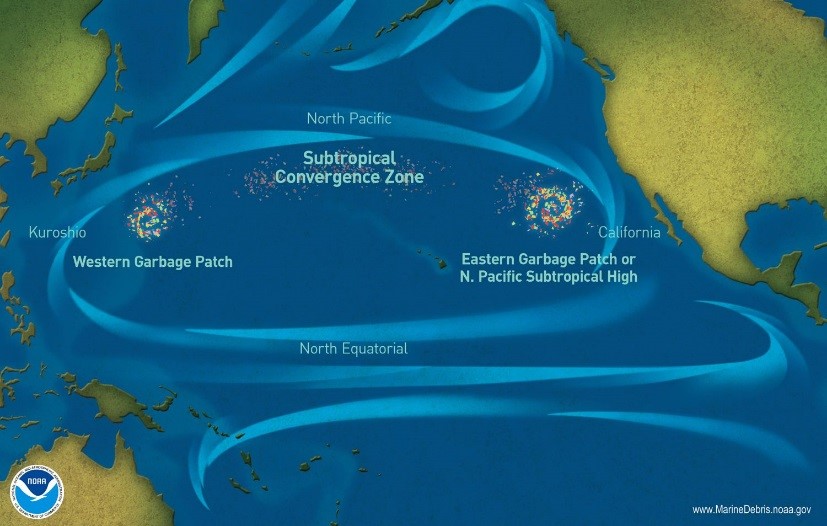 Plastic is a hardy material that can take up to 500 years to fully degrade. So what happens to the marine plastic in the meantime? With help from the sun’s UV rays, winds and waves, larger pieces of plastic waste break down into smaller and smaller pieces, known as microplastics. These tiny pieces can then be consumed by marine life who confuse the plastic for food. With approximately 60 times more plastic than plankton in our oceans, who can blame them? It is estimated that 100,000 turtles, marine mammals and seabirds die a slow and painful death every year because they have a stomach full of plastic bags, bottle caps and, yes, old toothbrushes with no room for actual food.

Plastics and associated toxins can also accumulate in marine life, such as fish, and end up as sea food on our plates. Plastics are made with harmful chemicals to enhance elasticity and fire resistance. Bisphenol A, plasticizers or flame retardants are added to almost every plastic product. Exposure to high temperatures, the wrong detergents or simply with time, plastic will become brittle and release these chemicals. Through ingestion, the airways, or even physical contact, these chemicals end up in our bodies. The health consequences are severe. They can include increased risk of cancer, asthma, infertility and developmental disorders.

Not all plastic waste starts out large. Microbeads, as in the miniscule balls of petrochemicals that occur in some cosmetics and account for 10% of the average tube of toothpaste, are too small to be filtered out by sewage plants and ultimately end up in our oceans. These tiny pieces of plastic arrive in the marine ecosystem the size of fish-food, without needing any help from the sun to break them down. From crab gills to coral reefs, microbeads and microplastics have been found embedded in numerous, troubling places in the seas.

And the plastics and debris that do start out large pose a constant threat of entanglement to marine mammals, seabirds and other ocean life. 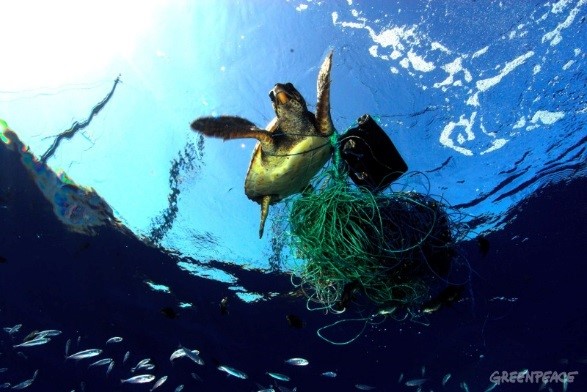 An endangered loggerhead sea turtle struggles in a cluster of net and marine debris in the Mediterranean Sea. Photo: Greenpeace/ Caré Marine Photobank

But there is still hope. In 2012, President Obama signed the Marine Debris Act Amendments into law to update original marine debris legislation passed in 2006. Marine Conservation Institute worked hard with both Republicans and Democrats in Congress to promote these amendments with testimony, lobbying and petitions. The support we received from people like you, who responded to our email alerts and called on their representatives in Congress, was essential to passing this law.  As a result of this legislation the government is looking at how to reduce marine debris at the source, map the debris and coordinate efforts with the states to prevent and clean up marine debris on our beaches and in our oceans.

While the Marine Debris Act Amendments of 2012 and bans several municipalities have placed on plastic bags are a strong step forward, we still have a long way to go to properly protect our oceans and marine life from marine debris. We must all do our part and radically change our consumption behavior to address this issue. From consistently recycling household plastic items to bringing re-usable bags to the grocery store, purchasing cosmetics made without microbeads, to buying in bulk, there are endless ways you can do your part to reduce marine debris. And, as you showed by supporting passage of marine debris legislation, don’t forget about the power of your voice! Contact your representatives and ask them to take action!

Want to learn more? Check out what these organizations are doing to raise awareness and combat marine debris!