Since President Obama announced his intent to consider expanding the Pacific Remote Islands Marine National Monument, a great deal of conversation has focused on current fishing practices in the potentially affected areas.  In particular, there has been concern expressed that a monument expansion would severely impact the Hawai’i-based longline fleet.  However, since 1994, the fishing activity by this fleet in the waters surrounding the Pacific Remote Islands Marine National Monument has been minimal, and has generally declined over the past 5-10 years.

Of the number of fish (all species) caught and kept by the fishing fleet in 2012, only 5.18% came from the Pacific Remote Islands Area (PRIA).  The percentage of all tunas (the most highly sought after group of species) caught in the PRIA and kept by the fleet in 2012 was 6.55%.  Additional details on overall catch levels, specific tuna species, and fishing effort are shown in the figures below.

All data taken from annual summary reports of fishing effort and catch statistics for US longline vessels landing in Hawai’i as derived from the National Marine Fisheries Service Western Pacific Daily Longline Fishing Log records. All figures are based on the number of fish caught and kept by the Honolulu, Hawai’i-based longline fleet. Additional figures and raw data available upon request. 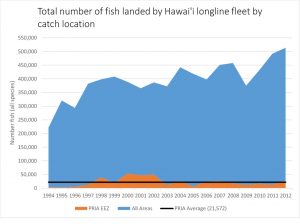 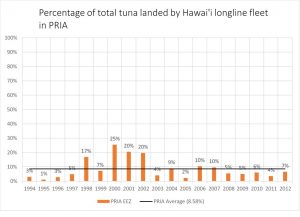 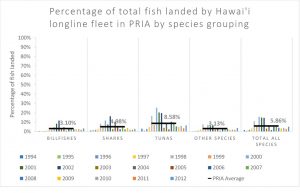 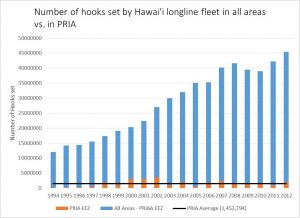