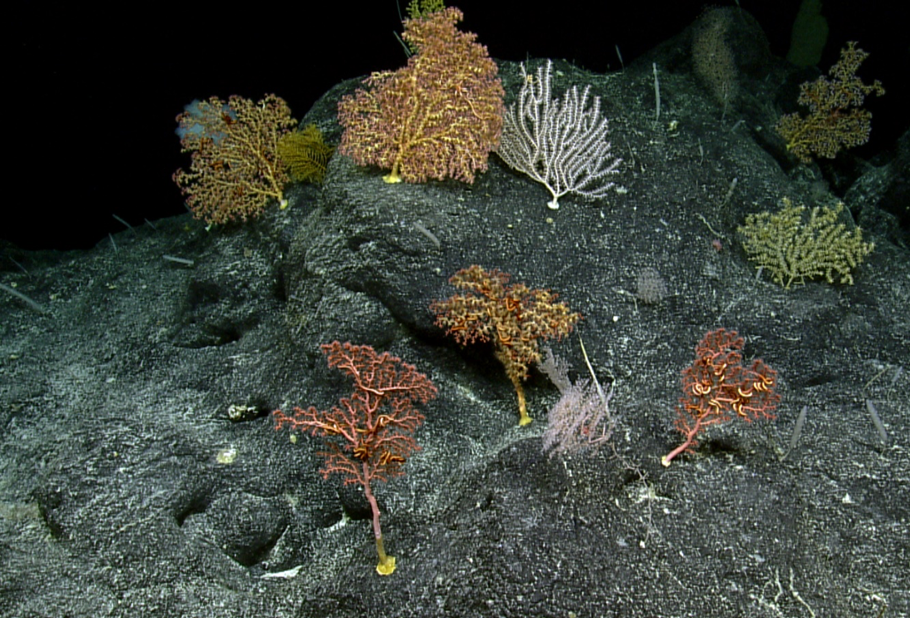 Marine Conservation Institute recently participated in a deep-sea expedition tasked with exploring seamount habitats in and around the Pacific Remote Islands Marine National Monument (PRIMNM). The expedition spent 22 days at sea aboard the Exploration Vessel Nautilus, using remotely operated vehicles (ROV) to collect high-definition video and samples from several seamounts in the region. As most of the ROV dives occurred in completely unexplored areas, the scientists aboard where not sure if they would find vibrant ecosystems or barren rocks and sediment.

The expedition uncovered an astonishing diversity of deep-sea corals on every seamount surveyed, including octocorals, stony corals, and black corals. These corals are also known as cold-water corals, as they are dependent on relatively cold waters for survival. Unlike their shallow-water counterparts, they do not contain the symbiotic algae that are a key source of energy for tropical corals. Instead, cold-water corals are filter feeders that catch plankton and detritus that rains down from more productive surface waters as marine snow. Unfortunately, these corals are highly sensitive to human disturbances and are currently threatened by a growing number of threats including fishing, pollution, ocean warming, deoxygenation, and acidification, oil and gas extraction, and deep-sea mining. Keep reading for an overview of the most commonly seen types of cold-water corals on this expedition.

Octocorals are one of the most diverse groups of corals (approximately 3,000 known species and counting), encompassing the bamboo corals, sea pens, and gorgonian corals seen during this expedition. Octocorals all have colonial polyps with 8-fold symmetry – eight tentacles on each polyp and eight mesenteries (internal membrane divisions). 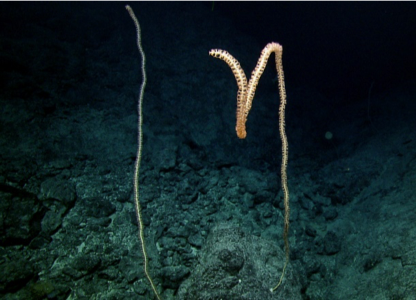 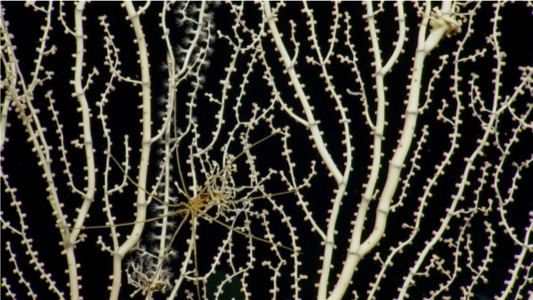 A close-up image of a large bamboo coral with a fan morphology, with a sea spider in the center. Photo courtesy of Ocean Exploration Trust.

Bamboo corals (family Isididae) are named for their bamboo-lookalike skeleton, which alternates long stretches of white, hard calcium carbonate with black nodes comprised of softer gorgonin protein. These corals can live for hundreds of years, and even after their death their skeletons provide important paleoclimate records for past ocean conditions, giving scientists important information about prehistoric temperature, carbon cycling, and nutrients. The expedition team saw a variety of bamboo coral morphologies, ranging from single whips extending into the water column to large fan structures. 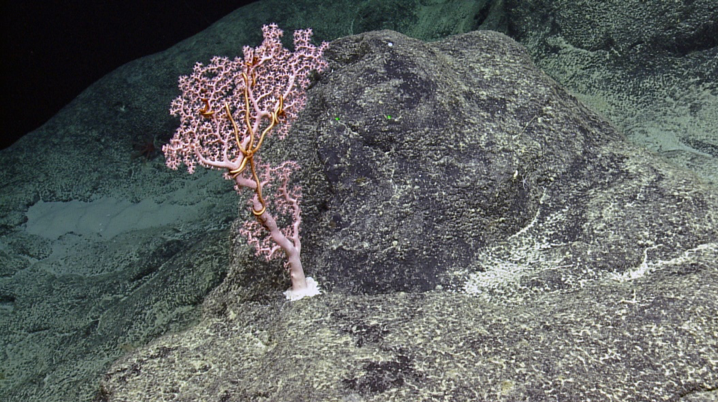 Another commonly seen octocoral during the expedition were precious corals (Corallidae). Unfortunately, precious corals have long been harvested, quickly depleting populations in some areas. Raw skeletons can be sold for as much as $2,000 per kilogram, and is then carved into necklaces and other jewelry that sell for much more. The life history of these corals (slow growing, long living, and low reproductive rates) makes this harvesting unsustainable. Despite this, there are currently few restrictions on the harvest and trade of precious corals in most areas. 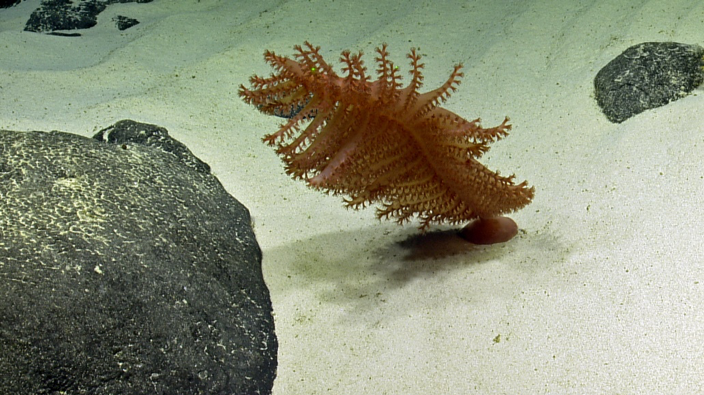 A sea pen anchored in sandy sediment, with its bulbous peduncle visible at the base of the colony. Photo courtesy of Ocean Exploration Trust.

Sea pens (Pennatulacea) are a unique group of octocorals as they most frequently occur in soft sediments, habitats that most other corals cannot survive in. As a result, they are often the only coral species observed during surveys that cross flat, sandy stretches, and are located around the world in a large variety of habitats up to 6,000 m in depth. While most coral species require a hard substrate to grow on, sea pens have specialized polyps that form a bulbous, root-like structure known as a penduncle. The peduncle allows sea pens to anchor into sandy bottoms, although a few species use theirs to attach to solid rock. Named for the resemblance that a few species have to quill pens, sea pens can be quite a bit bigger – some species can grow to be over 6 feet tall – and many bear little or no resemblance to quills. Incredibly, these unique corals are also capable of bioluminescence, believed to aid in defense from their natural predators – primarily sea stars and nudibranchs.

The subclass Hexacorallia includes all of the stony and black corals seen on the expedition, as well as non-coral Anthozoans including the sea anemones and zoanthids that are often found living in close associations with corals. In total, there are currently more than 4,300 species within Hexacorallia, although not all are corals. In addition to the five extant (still alive today) orders, there are two extinct orders – the Tabulata corals, whose skeletons resembled honeycombs, and the Rugosa corals, which grew large horn-like structures composed of calcite. 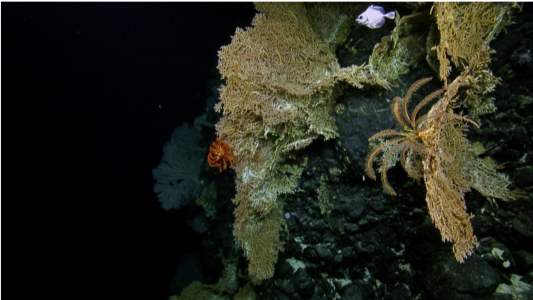 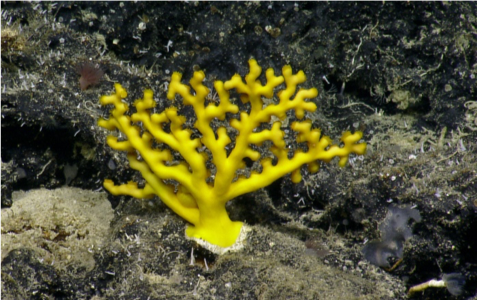 Stony corals (Scleractinia) are the primary reef-building taxa responsible for the creation of tropical coral reefs, but are also commonly observed in the deep sea. Occurring as both solitary polyps and colonial organisms, these corals secrete thick skeletal structures out of the aragonite form of calcium carbonate. In the deep-sea, stony corals are extremely important habitat creators, with their extensive skeletal frameworks harboring hundreds or even thousands of associated invertebrate and fish species. On this expedition, we observed three stony coral taxa: Madrepora, nicknamed the zig-zag coral due to its unique skeletal morphology (pictured), yellow and white/pink variants of Enallopsammia (pictured), and solitary cup corals. 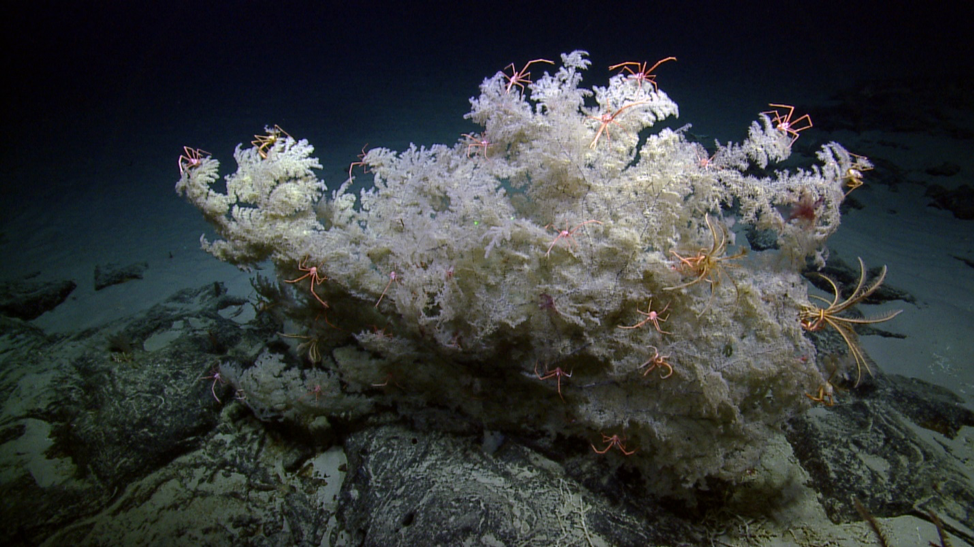 Black corals (Antipatharia) are named for their wiry black skeletons, although they are surprisingly amongst the most colorful cold-water corals, with a wide range of colors occurring even within single species. Black corals live astonishingly long lives. Several species have been found to live for thousands of years, with the oldest – a species of Leiopathes – determined to be more than 4,000 years old. Accordingly, they grow extremely slowly – as little as 35 μm year−1 per year. Organisms with such extreme longevity and slow growth rates are highly vulnerable to disturbance – once destroyed, black coral communities will not fully recover within our lifetimes. Like precious corals, they are often harvested for the jewelry trade. On this expedition, we saw a number of Bathypathes corals, as well as a few currently unidentified species. Samples collected during our dives will have their DNA sequenced to better resolve their taxonomy in this region.

The astonishing diversity of corals – as well as the sponges, invertebrate associates, fish, and octopuses – discovered on this expedition highlights the importance of exploring these remote deep-sea habitats. The imagery, samples, and data collected over the course of the expedition significantly contribute to the science-based rational for the current protections provided by PRIMNM. In addition, the discovery of vibrant coral ecosystems on seamounts just outside the PRIMNM border, including in international waters, provide increased justification for the future protection of these wonderful – and extremely fragile – habitats.