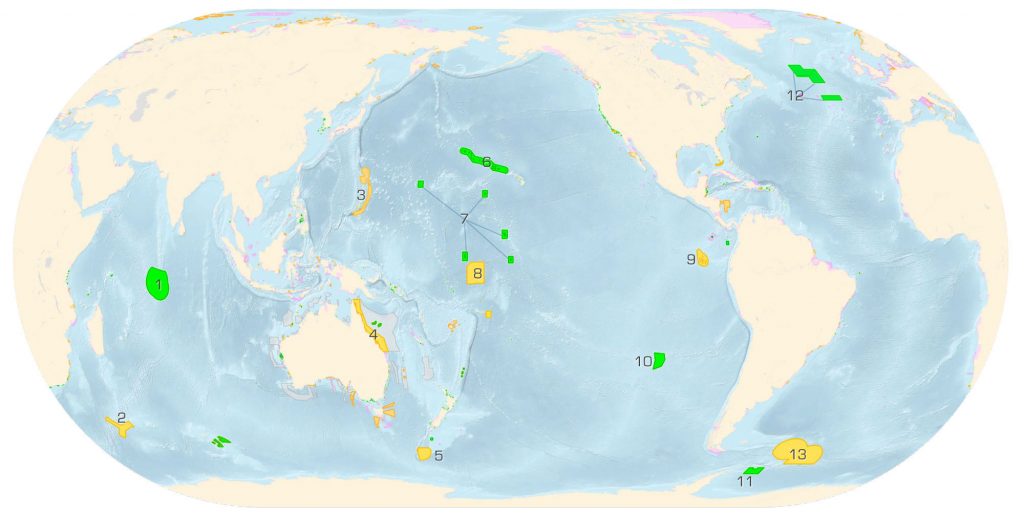 How much of the world’s ocean have humans safeguarded within reserves, refuges and parks to protect marine biodiversity?

It is tricky to provide a single clear answer to this question for a number of reasons. It’s trickier still to say which of them are effective at conservation because any number of planning, management and enforcement obstacles can negate potential protection “in the water” where it counts most.

For better or worse, the conservation community and resource management authorities frequently measure their progress by metrics of the number and geographic coverage of marine protected areas (MPAs). Indeed, a number of international agreements, such as the Convention on Biological Diversity’s 2011 Aichi Biodiversity Targets set a bar for critical conservation at 10% coverage by marine protected areas of the ocean within national jurisdictions and within biogeographic regions. Several scientific analyses, however, have indicated that having 20-30% of marine areas in reserves is the minimum necessary to safeguard marine life. Despite such warnings, we are now watching a very slow race to achieve 10% of marine areas in some form of protected zone (at the current rate, this might take us until 2100).

In this post, we’ll step through how these numbers play out as of May 2014 and look ahead to the hard work still left to do. At the 3rd International Marine Protected Areas Congress (IMPAC3) meeting in France in October 2013, the IUCN World Commission on Protected Areas (WCPA) and UNEP World Conservation Monitoring Centre (WCMC) announced what they are calling “The Official MPA Map” at ProtectPlanetOcean.org based on the latest World Database of Protected Areas (WDPA).

This analysis suggests that 2.8% of the total ocean is protected with about 10% of territorial seas (0–12 nautical miles), 5% of Exclusive Economic Zones (EEZ) (12-200 nautical miles), and 0.14% of the High Seas (beyond 200 nautical miles) within marine protected areas. This serves as a good upper-limit for the total amount of global marine protected area coverage. However, the actual amount of coverage by parks that have permanent protection is a little less, and the coverage of fully no-take areas and other strongly protected and well-enforced areas is even less still.

Over at MPAtlas, we’ve taken the WDPA data as a starting point and examined certain regions in depth, replacing WDPA records with national or regional databases that are more up-to-date or provide greater detail (e.g., using the NOAA MPA Center inventory for US sites) and performing additional corrections based on original research. In order to clarify the definition of marine protected areas in contrast to other marine managed areas, the IUCN uses the following:

A clearly defined geographical space, recognized, dedicated, and managed through legal or other effective means, to achieve the long-term conservation of nature with associated ecosystem services and cultural values.

Any area of the marine environment that has been reserved by federal, state, territorial, tribal, or local laws or regulations to provide lasting protection for part or all of the natural and cultural resources therein.

Both definitions clearly indicate the importance of permanence and place-based management. For this reason, in our analysis at MPAtlas we have pulled out a number of fisheries management zones that are temporary closures (e.g., don’t meet the promise of permanence) or broad regional management zones without clear place-based affinity and management (e.g., a single gear closure along the entire US East Coast does not equal a marine protected area in our analysis). With a pass through the database, we have removed about 2% of the global marine area covered by these types of non-marine-protected-area, fisheries management areas that are not also covered by other protected areas.

After filtering out such sites, we are left with approximately 1.8% of the world’s ocean contained within site-managed marine protected areas. Another difference between this number from MPAtlas and that from “The Official MPA Map” is that the 2012 Australian Commonwealth Marine Reserves are not included in our analysis. These areas are currently under government review and public consultation. If reinstated, they would add about 0.66% of global marine protected area and 0.24% to global no-take reserve coverage. 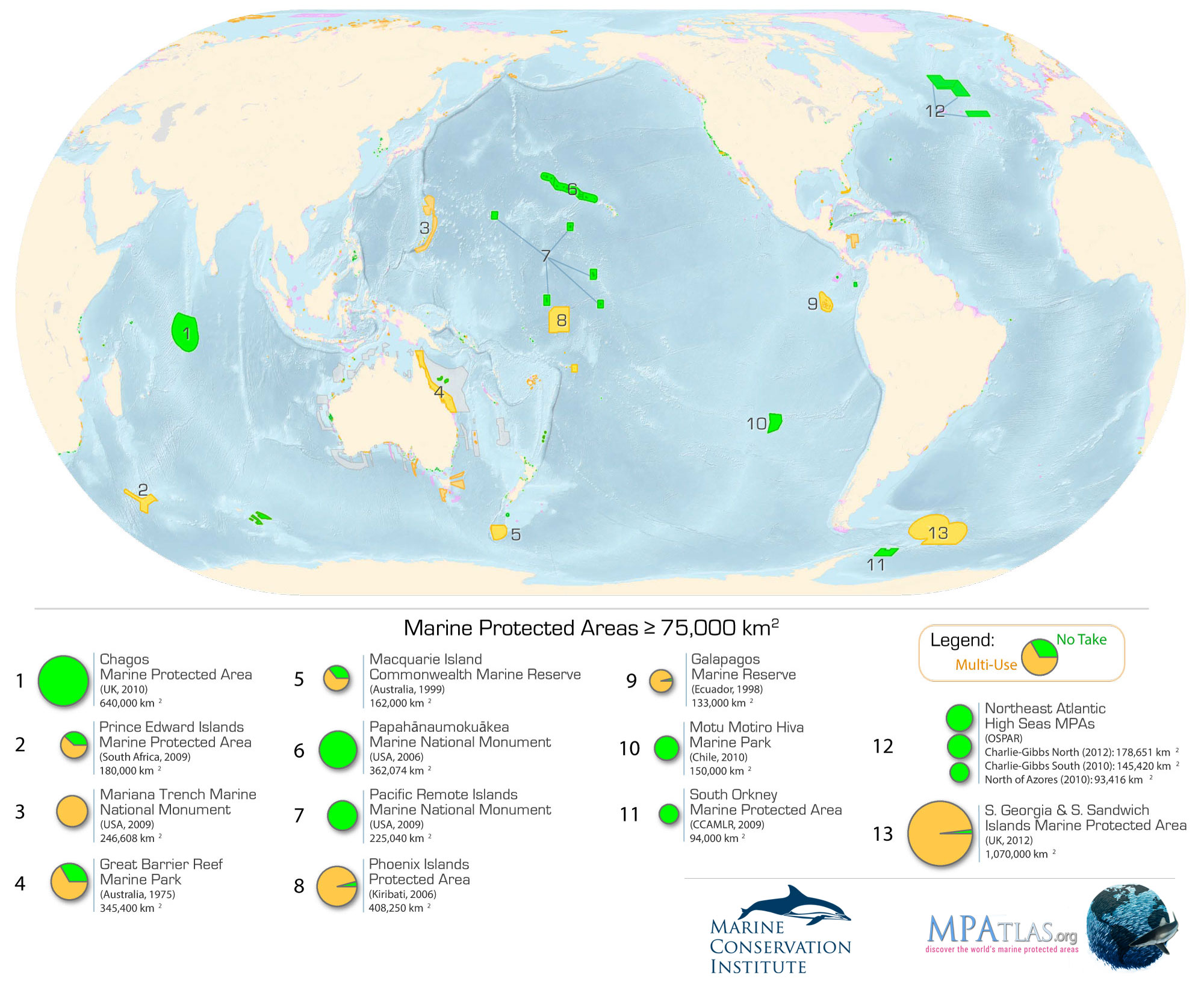 While Kiribati’s Phoenix Islands Protected Area has been only 3% no-take since its designation, the government has just announced a decision to phase out all commercial fishing within the entire area. This would represent a huge increase in global no-take area when this decision goes into effect. 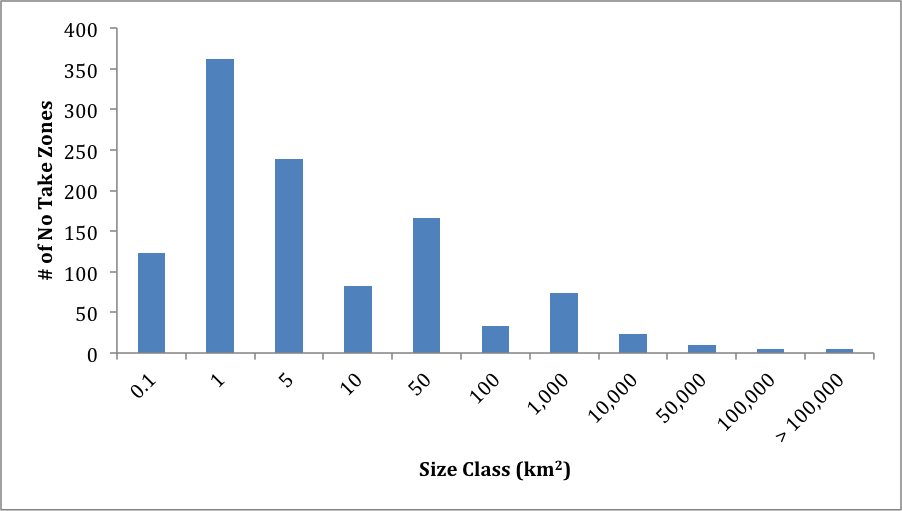 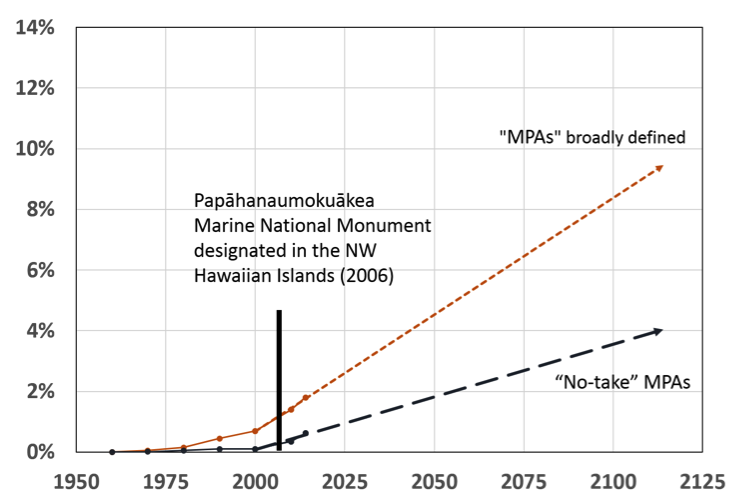 Whether we use a metric of MPAtlas’ 1.8% or ProtectPlanetOcean’s 2.8%, the message is the same: we have a long way to go as a global community to adequately protect vulnerable places and species in the sea.

At Marine Conservation Institute we are trying to change the slow pace of conservation in the ocean. Our Global Ocean Refuge System (GLORES) initiative is designed to catalyze strong protection for at least 20% of the ecosystems in each marine biogeographic region of the world’s oceans. By establishing consistent criteria for determining the most important locations and protection levels needed to save species and their habitats from harm, GLORES will provide standards that the world can use to evaluate the effectiveness of marine protected areas.