Featured Pic: A breeding rhinoceros auklet (Cerorhinca monocerata), one of the many seabird species that relies on the productive waters above Gumdrop and Pioneer Seamounts to forage. Photo courtesy of Mick Thompson (CC BY-NC 2.0). 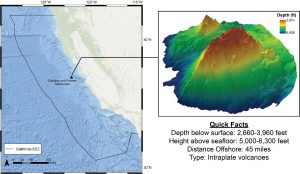 Gumdrop and Pioneer are neighboring seamounts located approximately 45 miles off the coast of California, close to San Francisco. The summit of Pioneer Seamount sits approximately half a mile (2,690 feet) below the surface, while Gumdrop Seamount is even deeper – 3,960 feet down. The seamounts are largely made up of various forms of basalt – a common volcanic rock type that forms when iron-rich lava cools quickly. Unlike many seamounts, which often form at the tumultuous intersection of two or more tectonic plates, they are both examples of intraplate volcanoes. Along with neighboring seamounts including Davidson, Guide, and Rodriguez, these types of volcanoes form within a single tectonic plate due to plumes of extremely hot mantle forcing its way through weaknesses in the Earth’s crust – in this case, likely due to the occurrence of an ancient spreading center. These seamounts also have a unique morphology, as they are comprised of a series of cones and ridges separated by sediment-filled troughs, as opposed to the more typical conical seamounts. 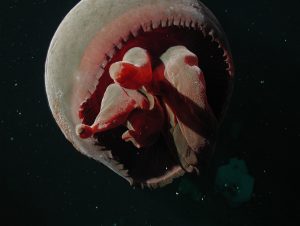 Only scientifically described in 2003, the gumdrop jelly (Tiburonia granrojo) was named after a rare observation on Gumdrop Seamount in 1998. Photo courtesy of NOAA/MBARI.

While Gumdrop and Pioneer have unique origins compared to many other seamounts, they support similarly high levels of biodiversity. Pioneer Seamount has a particularly dense cover of benthic organisms, dominated by cold-water corals (23 species and counting!), crinoids, and sponges. Scientists attribute the high abundances of benthic organisms at Pioneer Seamount due to its shallower summit depth and associated increased nutrient availability. A number of newly discovered species can also be found at these seamounts, including numerous soft corals (Chrysogorgia sp., Isidella tentaculum, and Gersemia juliepackardae), urchins (Araeosoma leptaleum), sea stars (Hippasteria tiburoni), and the gumdrop jelly (Tiburonia granrojo). The gumdrop jelly (also called ‘big red’) was named after a rare observation in 1998 on Gumdrop Seamount, one of only 22 sightings in the world. This incredible sea jelly can grow to be 30 inches across, and has thick oral arms instead of the whip-thin tentacles found in most other species.

Surprisingly, these massive volcanoes located thousands of feet below the surface of the ocean also support a pelagicecosystem teeming with life, including a variety of seabirds. Seabirds have long been known to associate with seamounts, using the productive waters above as important foraging grounds. Charles Darwin, more famous for his theory of evolution, was among the first to describe this remarkable association. Seamounts are so massive that they generate their own current patterns, often causing the upwelling of cold, nutrient rich water from the deep ocean. This supports a large diversity and abundance of life, including the upper water column prey that seabirds feed on. In one study of seamounts in the north Pacific Ocean, seabirds were found to be 2-40 times more abundant in the waters above seamounts as compared to other stretches of open ocean.

Shearwaters, albatrosses, petrels, terns, and auklets travel thousands of miles to feed in the productive waters above Gumdrop and Pioneer. As a result, these seamounts have become travel destinations for pelagic bird watching tours, with avid birders hoping to spot species that are less commonly seen near the coast. Some species, like Cook’s petrel(Pterodroma cookii) and the rhinoceros auklet (Cerorhinca  monocerata), have been shown to preferentially feed in more productive, cooler waters, explaining their annual migration to Gumdrop and Pioneer. Cook’s petrel, listed as a ‘vulnerable’ species, breeds on small islands off the coast of New Zealand, but makes the long trek to these seamounts every year to feed.

Unfortunately, seabirds are in a steep decline. Global seabird populations have declined by almost 70% since 1950, with an estimated two hundred and thirty million seabirds lost. Wide-ranging pelagic species, which includes those that frequent seamount habitats, have experienced the biggest losses. While great efforts are being made worldwide to protect breeding and nesting habitats for threatened, vulnerable, or endangered seabirds, it is important to also protect the vital foraging grounds that occur above seamounts. Seamount ecosystems are threatened by a large array of human disturbances, including pollution, climate change, deep-sea mining, oil drilling, and fisheries. Protecting these fragile seamount ecosystems will help conserve seabirds, as well as the incredible – often yet to be discovered – benthic life that inhabits them.