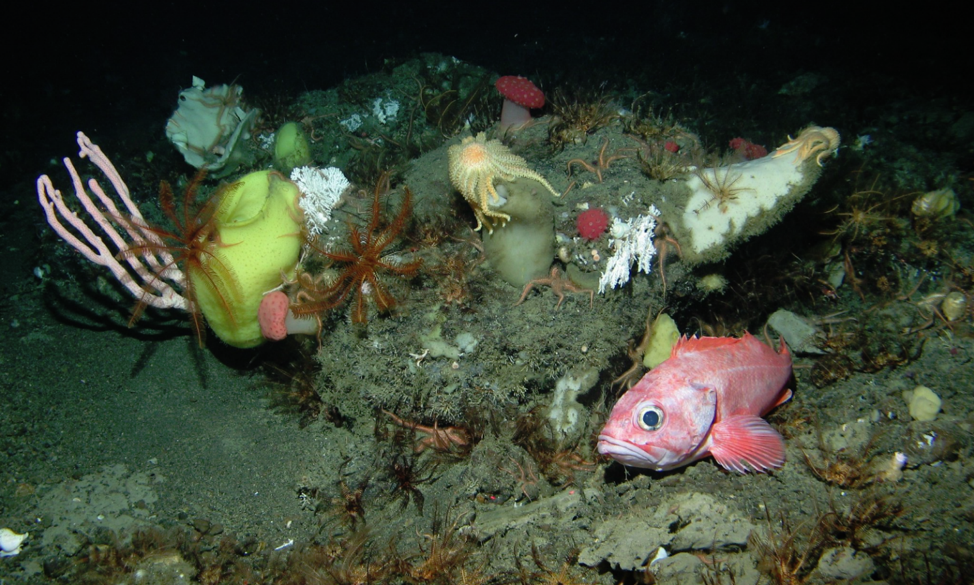 Featured Pic: A diverse assemblage of benthic organisms on a sponge garden at Mendocino Ridge. Image courtesy of NOAA NWFSC.

Position of Gorda and Mendocino Ridges within Californian waters (left), and three-dimensional maps of each (right).

The Gorda and Mendocino Ridges are a complex series of oceanic ridges just off the coast of northern California, and are home to unique deep-sea ecosystems including hydrothermal vents and cold seeps. Unfortunately, these areas may be at risk from future deep-sea mining efforts. It is critical that we enact protection for these diverse habitats before they are irrevocably damaged by commercial activities.

Only discovered in 1977, hydrothermal vents are incredible deep-sea ecosystems that form due to the venting of extremely hot and mineral rich fluids into the water column. Hydrothermal vents occur when fractures in the seafloor allow seawater and magma to meet, resulting in the venting of extremely hot (750°F and higher) fluids into the water column. These fluids are hot enough to cause minerals such as silica, sulfide, and heavy metals to leach from the surrounding rocks. When vent fluids hit the cold seawater above, these minerals precipitate into a cloud of either black (iron sulfide) or white (calcium and silicon) particles that look like a large plume of smoke, and eventually solidify into large chimney-like structures. 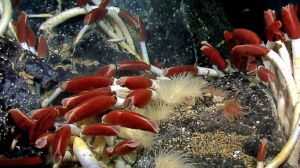 Entire communities of deep-sea species rely on these vent fluids as their sole source of energy – one of the only ecosystems on the planet that does not ultimately rely on sunlight. These ecosystems rely on chemosynthetic bacteria that can convert hydrogen sulfide into organic compounds that form the basis for entire hydrothermal vent food chains. Some of these bacteria are housed by other organisms – the most notable being giant tubeworms that have no digestive system, but instead feed solely on the organic matter their symbiotic bacteria produce, and can grow to be five feet tall.

Like hydrothermal vents, cold seeps are areas of the seafloor where hydrocarbon-rich (typically methane and hydrogen sulfide) fluids leak (or ‘seep’) into the water column. Like their name suggests, cold seeps are much colder than the fluids at hydrothermal vents. However, these fluids also form the basis for entire ecosystems – starting with the bacteria that convert these chemicals into organic matter. When these bacteria are free-living (not housed in another organism), the process of metabolizing seep fluids also generates calcium carbonate, eventually creating rocky substrate that is colonized by deep-sea organisms such as cold-water corals and sponges. These bacteria have also evolved to live inside organisms such as Bathymodiolus mussels, which in turn get all of their food from their bacteria residents.

A field of chemosynthetic mussels at a cold seep. Image courtesy of NOAA.

Gorda Ridge is located approximately 120 miles off the coast of northern California at the intersection of the Gorda Plate, the Juan de Fuca Plate, and the Pacific Plate. As the Pacific and Gorda plates move apart due to plate tectonics, the resulting spreading center created the ridge approximately 30 million years ago, and continues to cause volcanic and seismic activity in the region. A large eruption was observed as recently as 1996, covering an area of seafloor over 650 feet and two miles long with lava. As a result of this tectonic activity, Gorda Ridge houses the only known hydrothermal vent ecosystem within the U.S. exclusive economic zone, home to unique vent species such as vestimentiferan tubeworms (Ridgeia piscesa), and a newly discovered species of limpet (Lepetodrilidae gordensis).

Mendocino Ridge is located off the coast of northern California along the Mendocino Fracture Zone, which extends for over 3,000 miles east across the Pacific Ocean. The eastern part of Mendocino Ridge, known as the Gorda Escarpment, exists at the boundary of the Pacific and Gorda Plates, resulting in high levels of seismic and volcanic activity. As a result, the area houses cold seep communities. While chemosynthetic bacteria and the tubeworms, clams, and mussels they inhabit form the basis for these communities, the resulting surge in productivity in the otherwise sparsely populated deep sea has resulted in some of the highest deep-sea fish and octopus biomass ever documented. High densities of brooding octopuses (Graneledone boreopacifica) led scientists to label this area a reproductive ‘hot-spot’, suggesting that these ecosystems are important habitats even for species that are not exclusively located on cold seeps. Therefore, the loss of the seep habitats on Mendocino Ridge may have large ramifications for the health and diversity of other deep-sea habitats in the region.

After decades of damage stemming from bottom-trawl fisheries and the extraction of oil and natural gas, the deep sea faces a new threat: the deep-sea mining of seafloor minerals. The deep sea holds large quantities of untouched precious metals and other minerals. The minerals deposited by vent fluids make hydrothermal vents prime targets for the deep-sea mining of silver, gold, copper, manganese, cobalt, and zinc. Recent technological advancements, coupled with the rising demand and prices of these minerals, have made deep-sea mining increasingly commercially viable. Several companies have obtained mining leases for large areas of the seafloor, and preliminary mining operations have already been conducted off the coast of Japan.

Unfortunately, deep-sea mining causes wholesale destruction to benthic ecosystems. Large areas of the seafloor are ripped apart by the massive machines used to mine ore. Neighboring habitats not in the direct mining area are still affected by the turbid and potentially toxic plume of sediments released during the mining process. While early mineral leases for Gorda Ridge were abandoned due to a lack of technology and low commodity prices, renewed interest in deep-sea mining means that these sites may be targeted in the future. It is critical to enact strong protections to safeguard the unique and diverse ecosystems found on the Gorda and Mendocino Ridges before they are destroyed by deep-sea mining or other anthropogenic disturbances.