Humans are wreaking havoc on our oceans. Our impacts, from climate change to overfishing, are destroying marine ecosystems and their biodiversity. To stem these losses, the Half-Earth Project calls for us to work together and save half the planet for other life, and today has been named the inaugural Half-Earth Day to build support for this goal. They estimate that if we choose carefully, we can save 85% or more of species! The Global Ocean Refuge System (GLORES, pronounced “glories”) works towards a sympathetic goal: building a network of marine reserves that strongly protect 30% of the global ocean. Each Global Ocean Refuge is a step towards this target and each protects a special place for marine life. 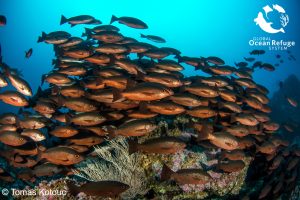 Off the coast of Colombia, Platinum Global Ocean Refuge Malpelo Fauna and Flora Sanctuary is a lush treasure and the eastern tropical Pacific’s largest no-fishing zone. As a result of this protection, it teems with a variety of sharks and hundreds of other fish species. Marine mammals, like humpback whales, and huge seabird colonies also ply its rich waters. Malpelo Island itself is the peak of an underwater ridge whose rugged cliffs and tunnels support this wildlife explosion. All told, this sanctuary’s natural wonders and conservation success make its place in GLORES well-earned. 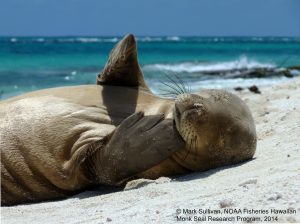 Covering over 1.5 million km2 in the Northwestern Hawaiian Islands, Papahānaumokuākea Marine National Monument is one of the world’s largest marine protected areas. The park’s inner section has a strict no-take policy, while its outer area permits some scientific research, Native Hawaiian practices and non-commercial uses. This outer, limited-use area is a protective buffer for the inner zone and these measures safeguard critical habitat for thousands of marine species, including the endangered Hawaiian monk seal and critically endangered Laysan duck. Its incredible biodiversity, huge size, exemplary management and strong protection make Papahānaumokuākea a perfect fit as a Platinum Global Ocean Refuge. 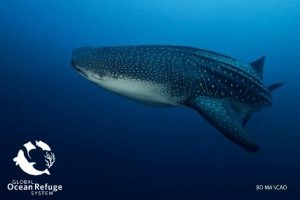 Located in the Coral Triangle, the Philippines’ Tubbataha Reefs Natural Park is a no-take reserve renowned for its resilient, healthy reefs. Protected since 1988, the Park harbors over 1,200 marine species and some, like the hawksbill sea turtle, are endangered and need its support. Beyond its own reefs, studies have found that Tubbataha is a source of fish and coral larvae in the surrounding Sulu Sea, which only amplifies its remarkable conservation value. For the Philippines’ effective management and the area’s ecological abundance, it was an honor to award Tubbataha Reefs Natural Park Platinum Global Ocean Refuge status. 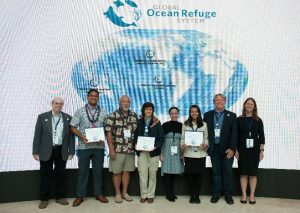 Together, the three Global Ocean Refuges protect a diverse array of marine life across the Pacific. As the network grows, it will elevate marine protection through inspiring examples and encourage others to follow GLORES science-based criteria and improve their marine protected areas. Each Global Ocean Refuge advances impactful conservation of vital ecosystems. Both the Half-Earth Project and GLORES are science driven initiatives striving to make room for all life on our planet. As we work towards our complimentary goals, the planet will return to its wild abundance. What could make for a happier Half-Earth Day than that?