Headlining Time Magazine this week is the debated issue of aquaculture’s role in the future of fish consumption. Despite the efforts to protect our oceans and build sustainable fisheries, ocean resources continue to quiver on the edge of extinction, forcing us to find an alternative to fishing.

For example, look at the case of tuna. Due to high prices, two more tuna species have recently been placed on the IUCN threatened list, the BBC reports. Bluefin tuna are one of the most expensive fish on the market and, combined with their long lifespans and restricted spawning grounds, the price on their heads is darkening their chance of survival. At best, there is an incentive not to eat them! To start, we should take action and remove tuna from our diet!
So are fish farms the answer to returning tuna to our plate? Maybe not for popular, but less “flexible” fish like tuna and salmon, but they may provide a sustainable way to keep fish in our diet at all. If managed properly, as proposed by NOAA’s administrator, Dr. Jane Lubchencho, who recently announced a new aquaculture initiative in coastal communities, aquaculture can provide jobs, lower fishing pressure, and create little waste.
However, many current fish farms are unsustainable and create immense amounts of water pollution, while housing miserable fish that never see the light of day. If aquaculture is to be accepted as the global alternative to fishing, current fish farms should undergo scrutiny and those being developed should adhere to strict guidelines to ensure sustainable production.
Check out the Greenpeace International website to learn about sustainable aquaculture.
What do you think about fishing vs. aquaculture? Comment below!
MORE MARINE CONSERVATION NEWS
Leatherback Sea Turtles Settlement Filed 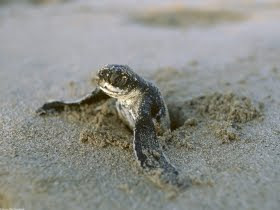 After over three years without action, a settlement was finally filed on July 8th requiring the government to make a final rule protecting critical habitat of the leatherback sea turtle by November 15th, 2011!
If the proposed rule becomes final, critical sea turtle migration habitat along the western coast of the US will be protected and, as ENN states, it would be the first ocean area off the continental shelf to be protected for sea turtles. Looks like we are making some progress!
The proposed area for protections is 70,600 square miles.
This whole proposal stemmed from a petition that was filed over three years ago by the Center for Biological Diversity, Oceana, and Turtle Island Restoration Network. When there was no response in governmental action, conservation groups sued the government on April 19th, 2011.
EVENTS
Check out the Conserving the Future Conference in Wisconsin, which is taking place from July 11th to 14th. You can watch the impressive lineup of speakers live starting on July 12th at 8:00 am, Central Time.
Speakers Include:
Admiral Thad Allen
Douglas Brinkley
Sylvia Earle
Dewitt Jones
Curt Meine
…and many more!
For more news, check out these headlines:
–Arctic may be ice-free within 30 years
–First Ever Photo of Fish Using Tools
–Answer for Invasive Species: Put It on a Plate and Eat It

Fish Farm photo by Kenneth Hong. Leatherback Sea Turtle photo from http://www.kewlwallpapers.com/wallpaper/First-Break-Leatherback-Turtle-Costa-Rica/
Posted in Blog and tagged Sea Turtle, Fish Farm, marine conservation, Leatherback, Aquaculture, fish
← This Weekend: Protect the Land (and Water) of the Free and the Home of the Brave!Way to go, Congressman Farr! →