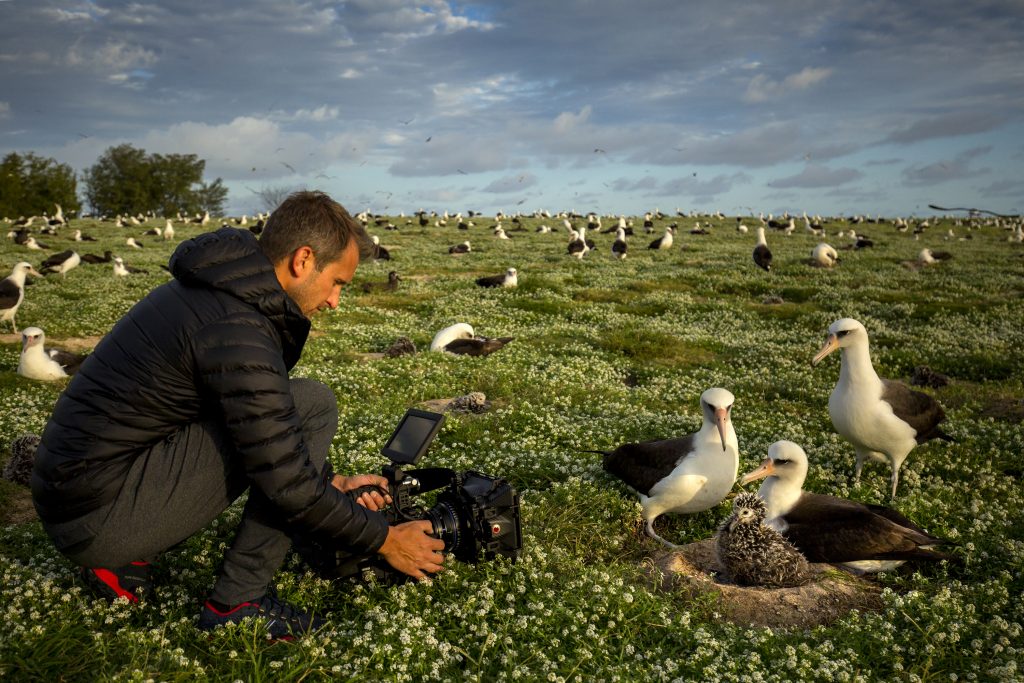 Featured Image: Ian Shive taking pictures of Laysan Albatross, some of the longest lived birds on the planet, nesting once per year at Midway Atoll in the Papahānaumokuākea Marine National Monument.

We sat down (virtually) with renowned photographer, filmmaker, and conservationist Ian Shive to chat about hope, wild places, and his upcoming book, Refuge. Among other adventures, the book captures the extraordinary marine life in the Pacific Remote Islands and Rose Atoll Marine National Monuments and Papahānaumokuākea Marine National Monument—the protection of which Marine Conservation Institute fought for nearly a decade.

Early in Ian Shive’s photography career, he skied deep into Yellowstone’s snowy woods and, coming across a dead elk, decided to sit on a rock for a while to see what might show up to investigate the carcass—maybe a raven, or a coyote if he was very lucky. He sat very still and kept very quiet. Then, all of a sudden, from between the trees, emerged an entirely white wolf. “I was so amazed, I was afraid to move,” Ian remembers. The animal paused, looked around, then melted back into the woods.

Ian never got a photo of that moment. He has, though, devoted his career to “trying to capture an emotion” in each photograph. In order to tell a good story, he decided early on, he would need to shoot images which didn’t just document vistas or wildlife, but which plunged viewers into some kind of feeling, like the stunned wonder of an encounter with a white-furred predator, or the humor and respect he felt for the Laysan albatrosses that he sat beside on Midway Atoll.

Driven by this philosophy, Ian’s journey has carried him from an initial career making movies to a pivot into conservation photography, during which time he has been featured in National Geographic, the New York Times, and Outside, won the Ansel Adams Award for Conservation Photography from the Sierra Club, and become the “leading chronicler of America’s national parks.”

“Now, the fear is like a darkness across the land . . . What reason is there to care if you can’t see and be inspired by nature and know that there’s value in it?”  - Ian Shive

A Book About Our Wildest Places

Some years ago, Ian strayed from the well-worn trails of the national parks and turned his attention to America’s network of national wildlife refuges, which contain huge stretches of ocean and together, make up one of the biggest protected networks of land and water on earth. His journeys took him deep into the wilderness and far out to sea, where he chronicled the science, wildlife, and beauty of Midway Atoll (part of the Papahānaumokuākea Marine National Monument and one of the world’s first Blue Parks) and the atolls of the Pacific Remote Islands and Rose Atoll Marine National Monuments. To find out how to view Ian’s extraordinary footage from those oceanic adventures, read more under “Tune In,” below.

The culmination of Ian’s travels through America’s remote wild places? His upcoming book, Refuge. Due out on October 27th, Ian’s book distills eight years of travel through the national wildlife refuge system—featuring not just the birds that wildlife refuges are famous for, but also “glaciers and polar bears and arctic tundra and taiga and hardwood forests and blue lagoons.”

“I don’t just want it to be a pretty book on someone’s table. I want it to be a tool of exploration that then inspires them to put on their own hiking boots.”  - Ian Shive

As the book evolved, Ian began to think of the idea of “refuge” differently—not just as a distant escape, but a mindset, a reengagement with the outdoor spaces that matter most to us, whether far or near. As COVID-19 ravages the globe and people tackle the anxieties that come with climate disruption and economic uncertainty, “the idea of refuge has become something much larger: a chance to re-think and re-set our relationship with nature.” Though the book wasn’t due to be published till next year, Ian worked with publishers to fast-track its release. “We all need refuge right now,” he says. “I don’t think there’s enough hope and inspiration in the environmental movement. Now, the fear is like a darkness across the land . . . What reason is there to care if you can’t see and be inspired by nature and know that there’s value in it?” Ian sees the role of his book—and the role of his career—as showing what still exists on this blue planet, and why it’s worth fighting for.

Ian Shive’s biggest hope is for his art to inspire immersive connection to the natural world.  “I don’t just want it to be a pretty book on someone’s table,” he says. “I want it to be a tool of exploration that then inspires them to put on their own hiking boots . . .The photos are only a first connection, but the next connection has to be in person, in that refuge close to home, or wherever you choose to go.” Perhaps, after getting glimpses into the refuges of the Pacific Ocean, readers will be inspired to put on not just their hiking boots but their snorkel fins, too!

“We all need refuge right now.”

Excited to view more of Ian Shive’s work? Refuge will be published on October 27th. Preorder your copy from your favorite independent bookseller, and explore some of Ian’s film footage, below.

“One of the most precious atolls on earth...”

In Midway: Edge of Tomorrow, Ian explores Midway Atoll’s cultural history, its famous role in the Pacific theater of World War II, and its role as a flagship of ocean conservation. Currently available on Amazon (free for Prime members), iTunes , Vudu, and Google Play.

Ians’ new show on Discovery Channel, Nature in Focus, highlights wild places and conservation stories from around the world, including watery destinations like the shark atoll of Palmyra.

“Journey to a faraway island wilderness lost in time…”

Ian’s extraordinary Imax documentary, Hidden Pacific, captures his experiences in the Pacific Remote Islands and Rose Atoll Marine National Monuments—the protection of which was a crowning moment of nearly a decade of Marine Conservation Institute’s efforts in the Pacific. Though its release date has been pushed back due to the pandemic, we’re honored to be offering exclusive limited-time early-bird access to it during our virtual Blue Parks Gala on December 3rd. Stay tuned for details!

“The idea of refuge has become something much larger: a chance to re-think and re-set our relationship with nature.”