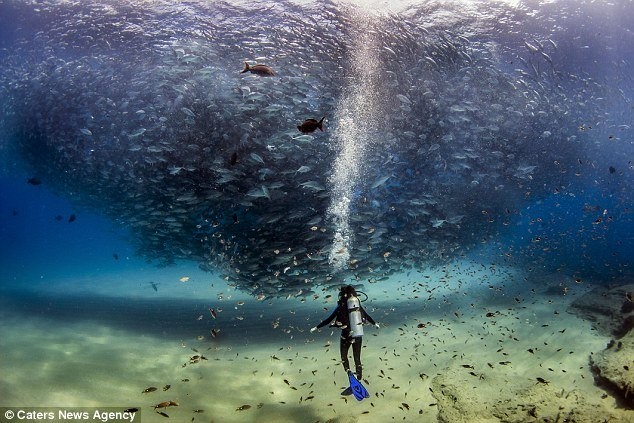 During the last few years there has been a remarkable increase in the number of marine protected areas (MPAs) around the globe. While this growth has brought celebrations and excitement to the marine conservation community, skepticism exists over whether the scramble to reach the Convention of Biological Diversity’s target to protect 10% of marine and coastal areas by 2020 is compromising the quality of these marine protected areas. While it can take time to tell how effective newly created MPAs will be at successfully protecting biodiversity, there are numerous, existing MPAs around the world that demonstrate how  immensely successful these efforts are at recovering biodiversity and providing benefits to local fisheries. Below we highlight three successful and inspirational examples of marine protection. 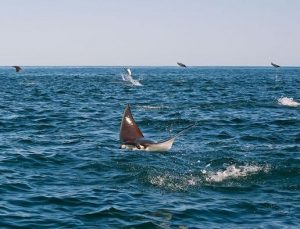 Researchers have dubbed Cabo Pulmo “the most successful marine reserve in the world.” Photo: Octavio Aburto.

Given the current state of peril in our oceans, one can hardly imagine that a place exists where Devil Rays fly over the ocean surface like pelicans and the sheer abundance of fishes turns into “fish-nados.” However, Cabo Pulmo National Marine Park in Mexico is an underwater paradise that has been dubbed, “The World’s Best Marine Reserve.”

Perhaps even more unlikely, Cabo Pulmo was created through the campaigning efforts of a local fishing family in 1995. They believed that the protection of the Cabo Pulmo ecosystem would allow people to make a better living through ecotourism than fishing. Twenty years later and with an area of only 71 square kilometers at the southern end of Baja California Peninsula, Cabo Pulmo is considered one of the best SCUBA diving spots in the world.

Extraordinarily, one scientific report found an average increase of 463%  in fish abundance since the Cabo Pulmo National Park was established. The upsurge in prey and protected breeding area led to a tenfold increase in sharks, an important species to balanced and thriving ecosystems.

Cabo Pulmo’s success is largely due to the local community’s dedication to protecting the area; individuals monitor the park and deter fishers within the boundaries. Even though officially only 35% of the park is a no-take zone, the community follows a no-fishing policy for the entire reserve. 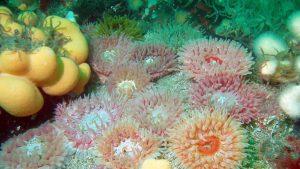 For almost 20 years, a Scottish community on Arran Island has been campaigning to protect its seas. Fishing was once a secure livelihood for the local community, but fisheries quickly collapsed in the late 20th century when the commercial fishing industry took over. To address the devastating decline in sea life, two Arran divers, Howard Wood and Don McNeish, founded the Community of Arran Seabed Trust (COAST) in 1995. Through the efforts of the local community and COAST, Lamlash Bay was designated by the Scottish Government as Scotland’s first no-take zone in 2008.

Recent surveys have shown that Lamlash Bay’s seabed is now 40% more complex and healthier compared to the surrounding, unprotected area. There has been an appreciable increase of species in Lamlash Bay, showcasing higher densities of crabs, scallops and larger, older lobsters. It also boasts a healthier population of juvenile haddock and cod.

As a result, Lamlash Bay has attracted visitors and SCUBA divers from around the world, subsequently boosting the local economy. For his success efforts to help establish Scotland’s first community-developed MPA, Howard Wood was recently acknowledged as a recipient of the 2015 Goldman Environmental Prize. 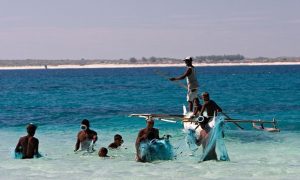 87% of adults among the Andavadoaka community in Madagascar are fishers; Photo: Blue Ventures.

In recent years, the nomadic Vezo communities in southern Madagascar have struggled due to heavily depleted fish populations, mainly caused by the commercialization of the country’s fisheries. To address this issue, the fishing village Andavadoaka decided to team up with Madagascar’s Institute of Marine Science, Wildlife Conservation Society and Blue Ventures Conservation to set up a trial fishery closure in 2004. This closure was aimed at recovering octopus populations that were depleted due to overfishing and a 35% increase in octopus exports between 2002 and 2003.

The effort was highly successful thanks to the partnerships and the community’s drive to protect its waters, since three quarters of the Andavadoaka villagers rely on fishing for their livelihood. In fact, a study found that mean octopus weight increased an average of 41% during the establishment of the temporary closure.

News of the success of the temporary closure spread quickly, and additional ones were soon established all along the southwest Madagascar coastline. As a result, in 2006, the Velondriake Locally Managed Marine Area (LMMA), one of the largest areas in the western Indian Ocean, was set up and now protects nearly 1,000 square kilometers of seagrass beds, coral reefs and mangrove forests.

Marine areas come in a wide variety of forms, from locally managed areas that integrate fishing closures to recover species, to no-take marine reserves that maintain and recover entire ecosystems. MPAtlas.org provides details and insights into these different kinds of marine areas and allows visualization of these different areas with its interactive online map. As we work to develop the Global Ocean Refuge System (GLORES), MPAtlas.org is a valuable tool to help track the many different types of protected areas that are being used around the world.  No-take marine reserves yield the highest conservation benefits for biodiversity, but in many parts of the world local communities that are completely reliant on fishing as a high quality source of protein also benefit.  GLORES seeks to integrate these different objectives by establishing a 3 tiered approach to protected areas that emphasizes local sustainable fishing as well as strongly protected, no-take reserves.