Octopuses are seriously cool creatures. They can rapidly change the color of their skin to blend perfectly into their environments, they have a whopping three hearts, eight arms, and nine brains, and they have evolved both venom and ink glands for defense. Their majesty doesn’t stop with their uniquely adapted bodies; octopuses are also the smartest known invertebrate, with the capability to solve mazes and even use tools. Not too bad for a mollusk closely related to clams. Octopuses are most commonly seen in shallow waters around the world: in and around coral reefs, rocky coastlines, and even sandy tidal flats. However, many people may not realize that they also live in the deep sea on and near seamounts! Here are three types that scientists commonly see in deep waters.

The most striking feature of the giant Pacific octopus (Enteroctopus dofleini) is its size; these massive creatures typically grow to between 22 and 110 pounds and 10-16 feet across, and have a record size of 600 pounds and 30 feet across! Despite their enormous size they still have relatively short lifespans of between 3 to 5 years, with both males and females dying shortly after breeding – females typically live just long enough to brood their eggs (as many as 400,000 of them!). While often found in the intertidal zone, they can be found up to depths of over 2,000 m. In 2010, a giant Pacific octopus made national headlines when it was discovered to be predating on the sharks in its shared tank at the Seattle Aquarium.

Another commonly seen octopus in the deep sea is the Dumbo octopus (Grimpoteuthis). Dumbo octopuses are members of the umbrella octopus family (Opisthoteuthidae), which are characterized by their unique web of skin connecting their tentacles. They use this skin as a defense mechanism, extending it out to appear much larger when threatened. Dumbo octopuses are categorized as cirrate octopuses due to the presence of fins. In their case, the fins are located just above their eyes, resembling the floppy ears of the famous Disney character Dumbo the elephant and giving rise to their common name. Like Dumbo, they can ‘fly’ through the water column by slowly flapping their fins. While these pelagic creatures are normally observed floating meters off the bottom, they do use the seafloor for rest, to feed, and for defense. While most Dumbo octopuses are relatively small (8-12 inches in length), they have reached a record size of six feet in length and over 13 pounds in weight. These deep-water dwellers are typically found an astonishing 3,000-7,000 meters below the surface! 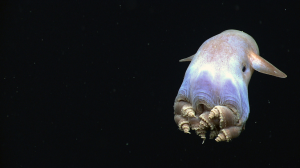 A Dumbo octopus (Grimpoteuthis sp.) swimming in the Gulf of Mexico. Photo credit: NOAA Office of Ocean Exploration and Research.

In October 2018, scientists aboard the E/V Nautilus (Ocean Exploration Trust) were exploring some rocky features near Davidson Seamount, located just off the coast of northern California in the Monterey Bay National Marine Sanctuary. Davidson Seamount is one of the largest and best-explored seamounts, standing at an astonishing 7,480 feet tall yet 4,101 feet below the surface. The seamount is home to more than 20 species of cold-water corals, including bamboo corals over 200 years old. On this expedition, the researchers were investigating a less explored and smaller basalt feature southeast of the seamount. What they saw shocked them (really – check out their reactions in the video below): hundreds to thousands of small octopuses clustered into every available nook and cranny. The scientists suggest that these “rivers of octopuses” were clustered here to brood (protect) their eggs, a behavior frequently observed in many other species of octopus. Female octopuses commonly brood their eggs, not eating for several months (and in one case, up to four years!) and dying shortly afterward. 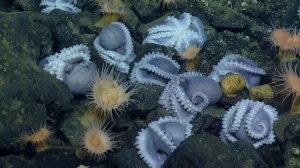 The research team later identified the octopuses as Muusoctopus robustus, part of a wide-ranging genus of deep-water octopuses that range from the frigid waters of the Antarctic to hydrothermal vents. Interestingly, on this expedition the team saw a telltale shimmer in the water that suggested the seeping of hot fluids associated with hydrothermal vents – previously unknown to exist in the area. This may suggest an association with how the octopuses select their brooding grounds – the only other brooding Muusoctopus colony ever discovered also occurred in close proximity to hydrothermal vents. However, in that case, it was found that the water was too hot and oxygen-poor to allow embryos to develop, leaving scientists perplexed. For now, any possible relationship between these octopuses and vents remains a mystery.

Incredible discoveries like this highlight the importance of exploring these remote and fragile habitats, and protecting them before they are irrevocably damaged. You never know when a seemingly inconspicuous rock feature is actually an important octopus nursery!