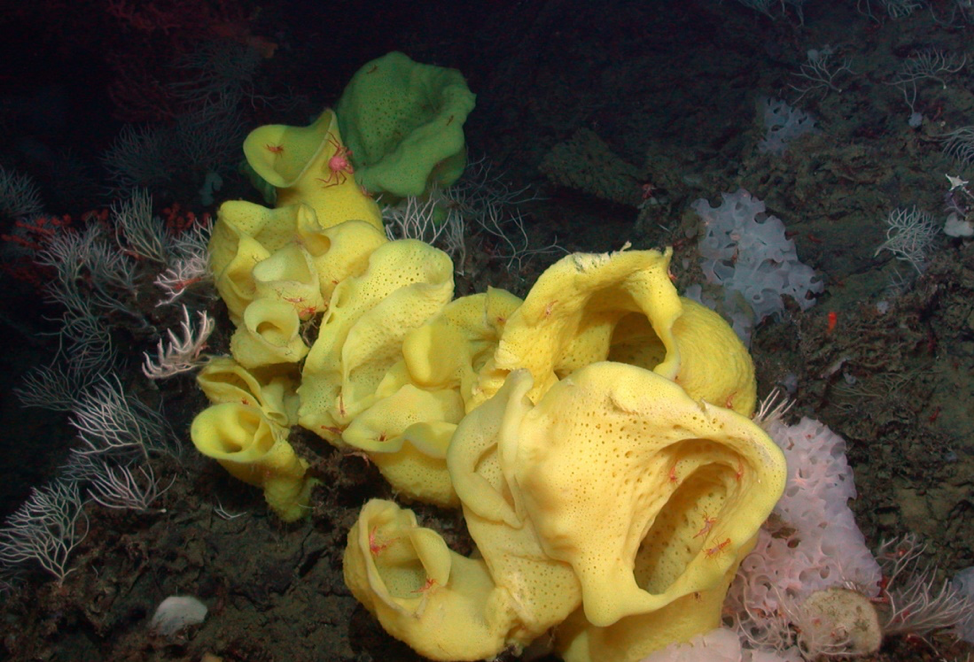 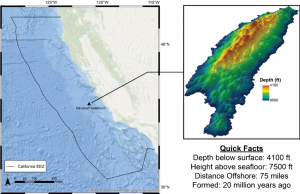 Davidson Seamount is an underwater volcano located just 75 miles off the coast of California. Its summit rises an impressive 7500 feet above the surrounding seafloor, yet still remains hidden beneath 4100 feet of water. One of the largest seamounts in U.S. waters, it is uniquely oblong in shape – extending over a massive area 26 miles long and 8 miles wide. The seamount formed an estimated 20 million years ago, with its last volcanic eruption occurring well over 9 million years ago. Today, the volcano is considered to be extinct, but is still growing at a barely perceptible rate due to the minute accumulation (1-7 mm per year) of ferromanganese oxide crusts.

Davidson Seamount was the first seamount officially recognized in U.S. waters. In 1938, it was designated by the United States Board on Geographic Names, named after George Davidson, a geographer and astronomer responsible for much of the early charting of the west coast. Accordingly, it has attracted more exploration and scientific study than other seamounts in U.S. waters, with a large number of survey expeditions over the past several decades. Scientists have used a variety of sophisticated instruments to plumb the depths of this massive seafloor mountain. One of the earliest surveys occurred in 2002, when a joint MBARI and NOAA mission used a remotely operated vehicle (ROV) to visually survey the flanks and summit of the seamount. ROVs are specially built robots that are controlled by a pilot onboard a research vessel, and can be outfitted with cameras, manipulator arms, sampling devices, and a wide variety of sensors. Since 2000, over 30 ROV dives have been conducted on Davidson Seamount, with additional observations coming from other technologies including automated underwater vehicles (AUVs) – robots that can be programmed to conduct surveys without a pilot controlling them, towed camera systems, and multibeam echosounders that map the shape of the seafloor using sonar. Despite these repeated expeditions to Davidson Seamount, less than 1% of its area has been surveyed. 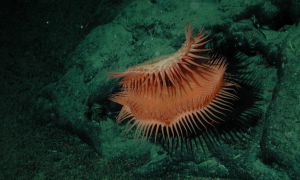 A sea anemone, bearing a striking resemblance to a Venus flytrap, on the Davidson Seamount off California. Image courtesy of NOAA and MBARI.

Seamounts are highly productive ‘oases’ in the deep sea, providing ecologically crucial habitats that support biodiversity hotspots throughout the world’s oceans. In part, this stems from the large effects that seamounts exert on local currents, resulting in reduced sedimentation rates, the increased upwelling of nutrient-rich water, and the greater influx and retention of food. As a result, seamounts are often hotspots of endemic species that do not occur in other marine environments; on average approximately 20% of seamount species are considered to be endemic to seamounts. A wide variety of organisms are associated with seamounts, including pelagic species such as tuna, sharks, billfish, seabirds, sea turtles, and marine mammals, as well as benthic organisms such as deep-water corals and other invertebrates.

Davidson Seamount is no exception. It is home to more than 230 species, including 25 species of deep-water corals – some of which are bamboo corals over 200 years old. Deep-water corals and sponges are particularly important as they create three-dimensional habitat structures that provide food and shelter for a large number of associated species, including many commercially important fish. These deep-water coral reefs can be considered the ‘old-growth forests’ of the ocean – they are long-lived, slow growing, and extremely slow to recover following disturbance. Amazingly, 15 previously unknown species have already been discovered on Davidson Seamount; more may be discovered in subsequent expeditions. 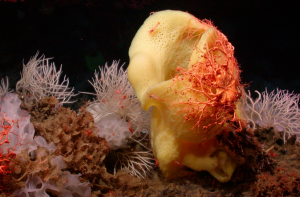 Seamount ecosystems are increasingly at risk from a number of anthropogenic disturbances including pollution, oil and natural gas extraction, deep-sea mining, fishing, and climate change. In many areas, including Californian waters, these habitats have been significantly damaged by bottom-trawling fisheries that drag enormous nets along the seafloor, indiscriminately catching corals, sponges, and fish. While global-scale disturbances – such as ocean warming or acidification – are difficult to mitigate, removing or reducing local disturbances –such as fishing and oil drilling – can greatly improve these ecosystem’s health and natural resilience to other stressors. The habitat structures created by deep-water corals and sponges in these ecosystems are extremely fragile and highly sensitive to disturbance – once damaged, these areas may not recover within our lifetimes. Therefore, it is imperative that we enact strong protection for these habitats before they are irrevocably damaged.

While most deep-sea habitats are not well protected (out of sight, out of mind), Davidson Seamount was added to the Monterey Bay National Marine Sanctuary (MBNMS) in 2008, making it the first seamount to gain official protection in U.S. waters (the expansion also added an impressive 775 square miles to the sanctuary). The MBNMS was originally designated in 1992, and confers federal protections to a large swath of coastal waters extending more than 275 miles south of San Francisco. The pristine nature of Davidson Seamount, along with its incredibly high biodiversity and abundance of benthic organisms, led to its inclusion in the MBNMS. However, in 2017, a Presidential Executive Order authorized the U.S. Department of Commerce to reevaluate the status of marine sanctuaries and monuments in light of renewed interest in these areas as targets for offshore oil and natural gas drilling. Commercial interest in deep-sea habitats highlights the importance of the protections that Davidson Seamount currently enjoys, but also contextualizes the alarming lack of protection for other seamounts in U.S. waters.