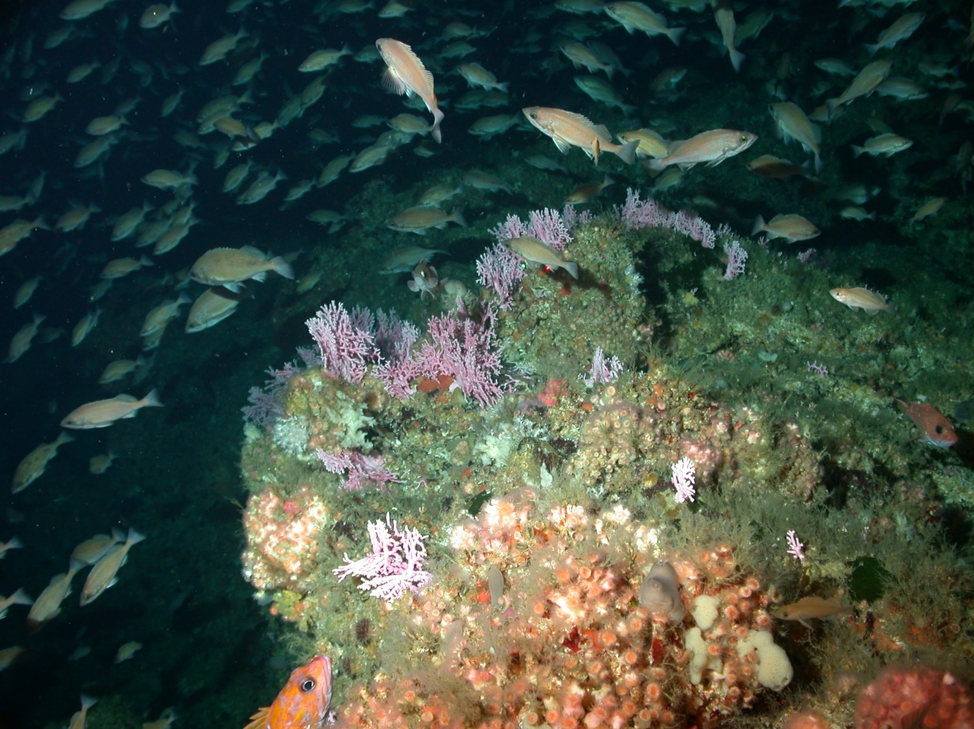 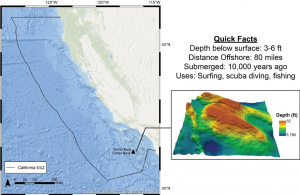 Position of Cortes and Tanner Banks within California waters (left) and three-dimensional map of the banks (right).

Cortes and Tanner Banks are twin seamounts located approximately 80 miles off the coast of California, and just five miles from each other. As recently as 10,000 years ago, the banks would have been classified as islands instead of seamounts, as rocky outcrops on their summits breached the ocean surface due to a lower sea level during the last ice age. Today, these sunken islands lie just below the surface. Bishop Rock, the high point on Cortes Bank, is typically only submerged by approximately 3-6 feet of water depending on tides and ocean swell. During storms, it is even possible to see the rocky tip of this seamount in the troughs of large waves!

A large part of these seamount’s notoriety lies in their nearness to the surface. Bishop Rock creates a serious shipping hazard – in 1986 the USS Enterprise aircraft carrier smashed into the bank, costing the Navy $17 million dollars in repairs. Another shipwreck – the SS Jalisco – was intentionally brought to Cortes Bank to scuttle it and create an artificial island designed to harvest abalone. Before the ship was maneuvered into the correct place however, it smashed into Bishop Rock and sank into deeper waters. Soon after, the federal government claimed the banks as U.S. territory, crushing any dreams of future artificial islands. 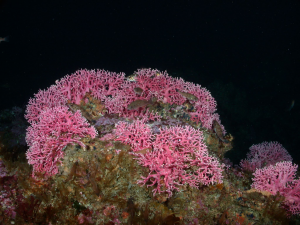 Recreational Activity at the Banks

The shallowness of Cortes and Tanner Banks also supports a myriad of reactional activities. The banks are popular destinations for scuba divers, who flock to the area in search of clear water, shipwrecks, massive kelp forests, abundant coral and fish life, and lobster fishing. Using only their hands, divers report catching massive California spiny lobsters (or ‘bugs’ as they are known in the fishing community) at the banks weighing up to 10 pounds each.

The unique geography of the banks has also cemented their status as a legendary surfing spot. The offshore and deep-water location of these seamounts brings massive, fast-moving ocean swells that sweep over their shallow summits, resulting in some of the world’s largest breaking waves. While the world record for surfing the largest wave moves around often (currently, an 80 foot wave in Portugal), it has been broken at Cortes Bank several times in the past decade – most recently with Mike Parson’s 77-footer in 2008.

Biodiversity at the Banks

In addition to creating massive waves for surfers, the size and shape of Cortes and Tanner Banks causes the upwelling of cold and nutrient-rich water to the surface, supporting a highly productive ecosystem brimming with marine life. Like many seamounts, the banks are home to a large number of habitat-forming benthic organisms including cold-water corals and sponges. The structures produced by these species support a large number of associated benthic species including anemones, sea stars, and rockfish. An astonishing 137 fish species, including 50 rockfish species, have been observed at the banks. Due to the shallowness of their summits, these seamounts are unique in their ability to host over 34 species of marine algae – important habitat formers and nutrient recyclers. The banks also provide critical habitat for the endangered white abalone. 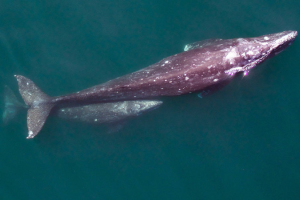 A gray whale (Eschrichtius robustus) and her calf, one of the many marine mammal species that use the productive waters above Cortes and Tanner Banks to feed or reproduce. Photo courtesy of NOAA Fisheries.

The nutrient-rich waters around the banks also support a thriving array of pelagic life. Many predatory fish migrate above the seamounts, including albacore, skipjack bluefin tuna, swordfish, thresher sharks, and leopard sharks. The area is also home to four species of endangered sea turtles (loggerhead, olive ridley, green, and leatherback), and is an essential feeding, reproductive, and migratory habitat for over 35 species of marine mammals. The banks are seasonally visited by endangered blue and fin whales, and are key migratory pathways for gray and humpback whales. In addition, dolphins, sea lions, orcas, sperm whales, and elephant seals can be seen foraging in the area.

Unfortunately, Cortes and Tanner Banks are heavily fished. Recreational and commercial fisheries target this highly productive area for a wide range of species including tuna, swordfish, rockfish, seabass, sea urchins, squid, mackerel, and spiny lobsters. Recreational fishers catch an estimated 5,000-10,000 fish per year, with an estimated industry value of $6.5 million. While commercial fishing catches have been decreasing over the past several decades, the average annual catch is valued at approximately $400,000 – approximately 0.5% of the total California catch. The abalone fishery, which historically heavily targeted the banks, was closed to commercial activity in 1997, and will be closed for recreational fishers until at least 2021 due to alarming population declines. It is critical to secure protection for the vibrant and productive ecosystems at Cortes and Tanner Banks before they are irrevocably harmed by fishing or other human impacts.