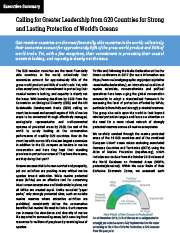 Following the annual World Economic Forum at Davos, January 22-25, our staff at the Atlas of Marine Protection released a new report on how well nations are protecting our ocean. The SeaStates G20 Report ranks just how well the world’s largest economies are doing at establishing highly protected MPAs.

The G20 member countries are the most financially able countries in the world; collectively their economies account for approximately 85% of the gross world product and 80% of world trade. Yet, with a few exceptions, their commitment to protecting their coastal waters is lacking, and capacity is clearly not the issue. With looming deadlines by 2020 from the Convention on Biological Diversity (CBD) and the UN Sustainable Development Goals (SDG) calling on countries to meet and exceed targets of 10% of marine areas to be conserved through effectively managed, ecologically representative and well-connected systems of protected areas by 2020, the rest of the world is surely looking at the conservation performance of wealthy G20 countries. How do the countries with our world’s nineteen largest economies in addition to the EU compare as leaders in marine conservation and have they kept their standing promises to protect our oceans? They have the means, are they doing their part?

Oceans are essential to human survival and prosperity, yet our activities are pushing many critical marine species toward extinction. While marine protected areas (MPAs) are an effective tool for conserving intact ocean ecosystems and biodiversity in place, not all MPAs are created equal. Unlike so-called “paper parks,” only strongly protected sites, such as no-take marine reserves where extractive activities are prohibited, consistently deliver the conservation benefits that marine life need to thrive. Such reserves can increase the abundance and diversity of marine life exported to surrounding areas, both securing food resources for millions of people and preventing loss of species.

To this end, following the Malta Declaration at the Our Ocean conference in 2017 (for more information see https://www.nationalgeographic.org/projects/pristine-seas/malta-declaration/), an international coalition of marine scientists, conservationists and political operatives have been urging the global conservation community to adopt a standardized framework for assessing the level of protection afforded by MPAs, particularly from fully and strongly protected reserves. The group also calls upon the world to look beyond minimal protection targets and focus our attention on the need for a more robust network of strongly protected reserves across all marine ecosystems.

We carefully combed through the marine protected areas of the 19 G20 countries and of the combined European Union* ocean estate excluding associated Overseas Countries and Territories (OCTs) using the Atlas of Marine Protection (mpatlas.org), which includes source data from the October 2018 release of the World Database on Protected Areas (WDPA, protectedplanet.net). Within the outer limits of their Exclusive Economic Zones, we assessed each
country’s inventory of designated marine protected areas, which includes both fully implemented sites in effect on the water and sites legally designated but pending implementation, with particular attention to strongly protected marine reserves. 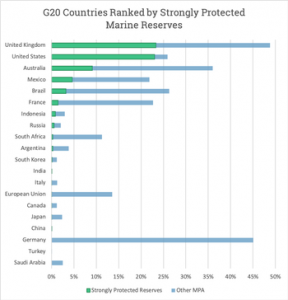 Of the 19 G20 countries, only 6 have protected more than 1% of their oceans in strongly protected reserves. The United Kingdom (UK) and United States (US) lead the pack of front runners, with a full 23.3% and 23.1% of their respective marine estates fully protected. With a comprehensive marine park network coming into force this past July 2018 after six years of limbo, Australia ranks in third place with 9.2% of its entire marine estate within no-take reserves. In fourth place, Mexico has strongly protected about 4.7% of its marine area with 21.9% falling within all forms of marine protected areas.  Brazil follows behind with 3.3% of its ocean in strong reserves, with a significant contribution from no-take zones within the two new massive Environmental Protection Areas of Sao Pedro e Sao Paulo and Trinidade e Martim Vaz. In sixth place, France strongly protects about 1.5% of its vast marine estate. The remaining G20 group members have fully protected less than 1% of their oceans, including the whole European Union* with a minuscule 0.02% safeguarded within strongly protected reserves. 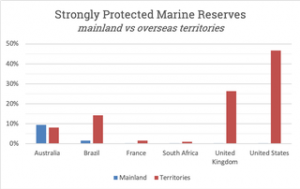 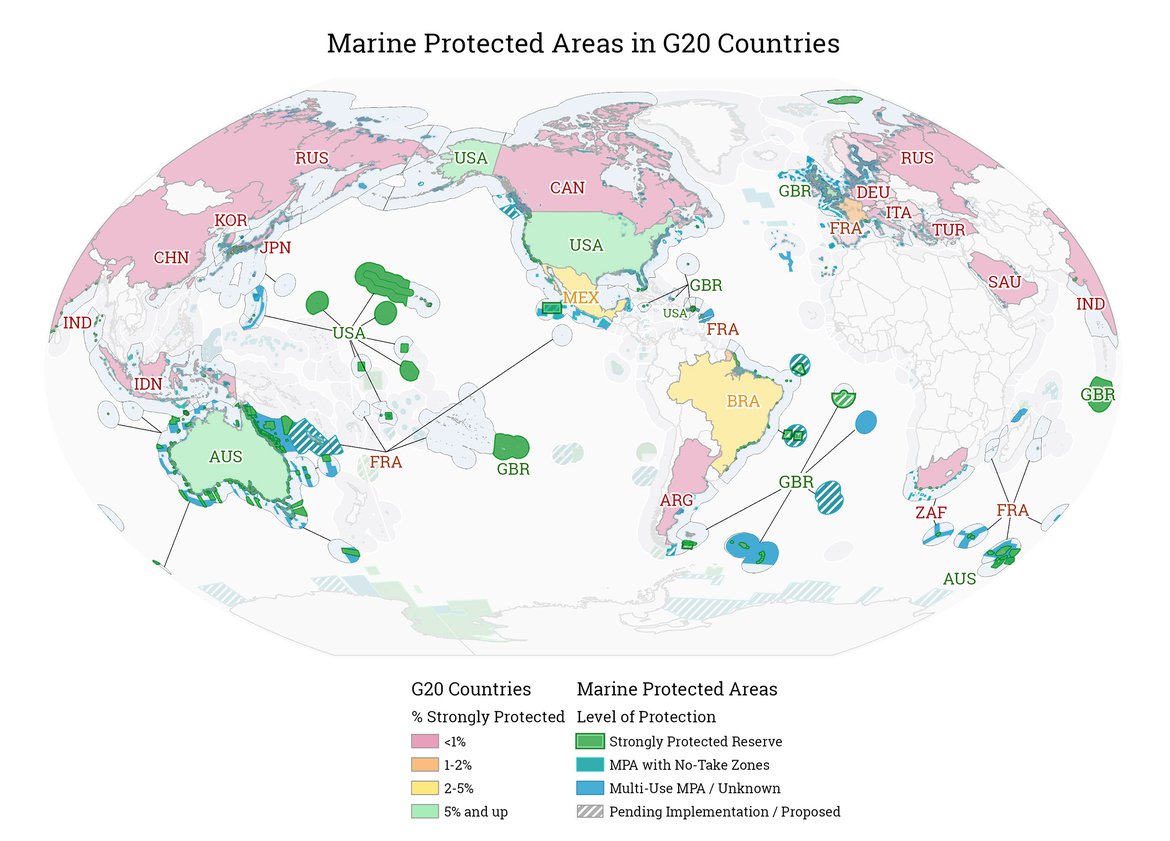