Feature Pic: A discarded aluminum can sits deep in the Channel Islands. Photo: MARE and NOAA

We’re all too familiar with the horrible images of once pristine beaches that are now covered with trash, threatening a wide array of charismatic animals including sea turtles, seabirds, and marine mammals. What about our ocean’s most remote habitat though – the deep sea? You may think that the deep sea is largely safe from man-made trash and pollution due to its isolated nature. Unfortunately, that is not the case.

The deep sea is subject to a constant flow of anthropogenic pollution ranging from large debris such as fishing gear [1], legally and illegally discarded ship waste [2], microplastics [3], and sewage, dredging, drilling, and mining waste products [4] [5]. A wide suite of chemical waste has also reached its depths, including pharmaceuticals [6], toxic metals [7], pesticides [8], and PCB’s (harmful chemicals used as coolants and banned in the US since 1978) [9]. Oil and natural gas drilling operations are also chronic polluters in the deep sea, resulting in the release of sediments and drilling fluids, and small oil and gas leaks [10]. Recent incidents – such as the Deepwater Horizon oil spill – have highlighted the damage that large-scale oil spills can have on deep-sea biota [11]. The deep sea has also been discussed as a viable future dumping ground for unwanted carbon dioxide, litter, and even radioactive waste [12]. Out of sight, out of mind – right? 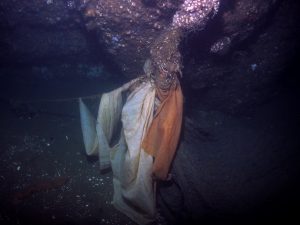 Marine litter is often the most readily observable form of pollution – not surprising given that over 6.4 million tons is dumped into the ocean every year [13]. On our recent cruise to the Cordell Bank region in conjunction with NOAA and Marine Applied Research & Exploration (MARE), we witnessed numerous examples of discarded or abandoned debris including ropes, nets, and fishing lures. The cruise was focused on studying deep-water coral and sponge habitats across three National Marine Sanctuaries off the coast of California, in many cases visiting unexplored sites. The presence of trash in these remote, protected, and never-before-seen habitats was a stark reminder of the wide-ranging impacts of our society on the ocean.

Not-so-fun fact: the deepest recorded instance of litter is from an astonishing depth of 7,216 meters (over 23,000 feet) off the coast of Japan [14]. It seems, therefore, that no habitats on the planet are truly removed from human disturbance. While the occasional rope draped across the seafloor may not seem like a significant threat, this debris can physically damage seafloor ecosystems in the same way that bottom trawl fisheries do, and may continue to cause damage long after being discarded. The habitat structures created by deep-water corals and sponges in these ecosystems are extremely fragile and highly sensitive to disturbance – once damaged, these areas may not recover within our lifetimes. 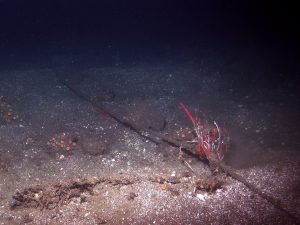 A lost or abandoned line stretches across the seafloor, cutting through a damaged red gorgonian coral. Photo: MARE and NOAA

Of particular concern is lost or abandoned fishing gear, which has given rise to a phenomenon known as ghost fishing. Fishing gear ­– especially traps, nets, and lures – can continue to catch fish and other organisms long after being discarded, in addition to the physical damage they have on deep-water reefs. In many cases, trapped fish attract predators or scavengers that are then caught as well. Lost fishing gear makes up 10% of all marine litter [15] and, with the increasing use of synthetic materials, may not degrade for considerable time periods. In some cases, lost fishing gear has continued to catch fish with 50-90% efficiency [16], and have been found to continue to operate for years after being discarded [17]. Alarmingly, ghost fishing may catch a large percentage of species that were not originally targeted by the fishery, including marine mammals [18] and endangered species [19]. 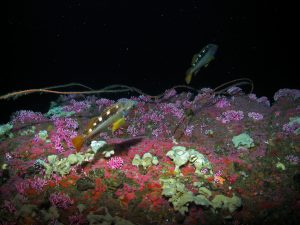 The deep sea is already threatened by a large number of global-scale anthropogenic impacts ranging from warming, deoxygenation and ocean acidification to overfishing and habitat destruction. Marine debris and pollutants pose additional risks to these sensitive habitats, further damaging already stressed ecosystems. While we are unlikely to solve these global stressors overnight, reducing the stream of trash that finds its way into our deep oceans may slow the damage being done to these fragile habitats.