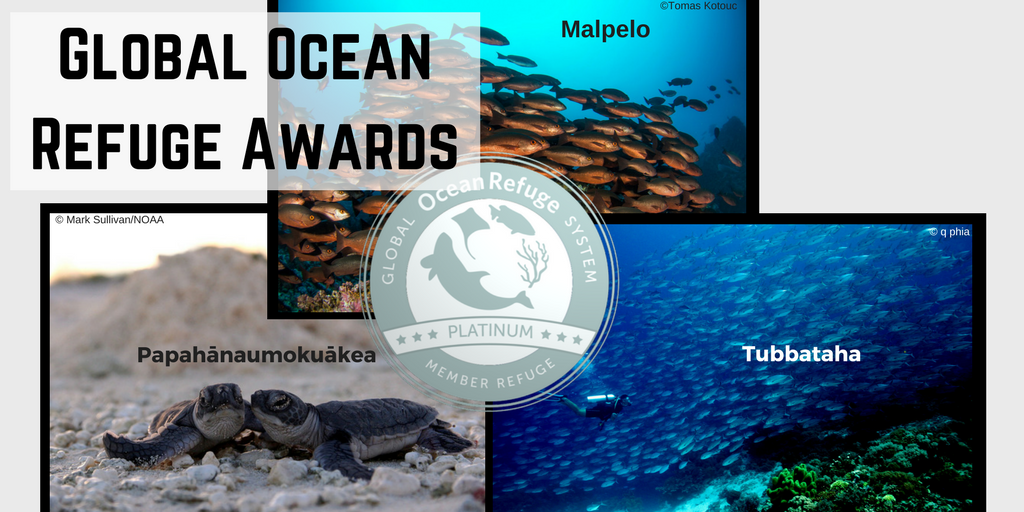 Washington, D.C. — Marine Conservation Institute, a leader in securing protection for the oceans’ most important places, announces the first-ever Global Ocean Refuge System (GLORES, pronounced “glories”) awards. This initiative is designed to incentivize marine conservation through recognizing the most effective marine protected areas (MPAs) according to science-based standards. Movies have the Oscars®, the Olympics® have medals, restaurants have Michelin® stars, energy efficient buildings have LEED® certification. Until now Blue Parks, Marine Reserves, or MPAs have had no rating system to highlight the best among them. The objective of this innovative, new award system is to increase the amount and quality of MPA coverage around the world to meet the UN goal of 10% of the ocean protected by 2020 and the IUCN (International Union for Conservation of Nature) goal of 30% of the ocean protected by 2030. Today, according to the MPAtlas, only 3% of the world’s oceans have been designated as a marine protected area of any kind, and only 1.6% of the ocean is strongly protected in no-take marine reserves, the most effective form of conserving and recovering marine life.

Dr. Lance Morgan, President of Marine Conservation Institute said, “Marine Conservation Institute has worked closely with our GLORES Science Council composed of well-known marine scientists to create a system similar to Michelin Stars® for marine protected areas. Our principle objective has been to build market and reputation incentives for governments around the world to create marine reserves with high levels of protection in the most critical places in the world’s oceans. We believe GLORES awards will speed the creation of strong marine reserves and strengthen the protections in existing ones. GLORES awarded marine reserves will function just like the parks we have on land that protect wildlife inside whole ecosystems and increase resilience to the impacts of climate change.”

Three of the nominees this year were judged by the GLORES Science Council to be worthy of Platinum –the highest– status. The 2017 award winners are:

“Papahānaumokuākea Marine National Monument is the largest contiguous fully protected conservation area under the U.S. flag, and one of the largest marine conservation areas in the world. It encompasses 582,578 square miles of the Pacific Ocean, an area larger than all the country’s national parks combined.”*

“A World Heritage Site, [it] is an isolated oceanic habitat of extremely rich marine life in very good condition which is important to the maintenance and dispersal of the marine life of the Eastern Tropical Pacific. It has some of the best diving in the world” **

Global Ocean Refuges are evaluated according to clear, science-based criteria, including:

GLORES awards are not designed to displace other organizations’ MPA systems or imply that Marine Conservation Institute had a role to play in their creation. The vision of GLORES is to encourage international collaboration and to amplify the stature of valuable ocean areas across initiatives such as Mission Blue Hope Spots, Pew Bertarelli Ocean Legacy, National Geographic Pristine Seas, UNESCO World Heritage and others.

Marine scientists and explorers, businessmen who make their living based on healthy oceans, surfers, and marine photographers who connect us to the oceans with their wonderful images have endorsed the idea of the GLORES award system for the best MPAs around the world. Each, based on his or her own deep connection to the ocean and the marine life that lives in it, recognizes the importance of the GLORES effort.

Dr. Sylvia Earle, a world famous marine explorer, former chief scientist of NOAA, and founder of Mission Blue said, “The Global Ocean Refuge System is critical to saving the biodiversity of our oceans. It makes so much sense, we all should have thought of it a long time ago.”

“My experience engaging with Hawai‘i stakeholders on the Papahānaumokuākea expansion left me with hope for the future,” said Senator Schatz.  “It was hard work to refine the details but the overwhelming support for the expansion made it possible to find consensus and move forward to protect the Pacific Ocean. I am confident that more and more communities will be inspired to follow, and I believe that today’s awards will help keep the momentum going.”

“There is a momentous moral decision confronting humanity today as we ponder how to care for our planet. Suitable habitat, crucial to nature’s survival, is shrinking fast. Currently, about 15% of the global land surface and 3% of the global ocean surface are protected in nature reserves, but only if we conserve 50% or more can we protect the bulk of our planet’s biodiversity. The time has come to achieve a sustainable coexistence with the rest of life and raise our conservation efforts to a new level.”

Marine Conservation Institute is a team of highly-experienced marine scientists and environmental policy advocates dedicated to saving ocean life for us and future generations. The organization’s goal is to help create an urgently-needed worldwide system of strongly protected areas—the Global Ocean Refuge System (GLORES)—as a strategic, cost-effective way to ensure the future diversity and abundance of marine life. To enhance marine protection efforts in the U.S. and around the globe, Marine Conservation Institute also built the world’s most comprehensive online marine protected area database, MPAtlas.org.

For more information on Marine Conservation Institute, GLORES or the MPAtlas, go to:

Mike Gravitz, Director of Policy and Legislation – in U.S.

Background papers and video about GLORES available at: