“What we do in the next ten years will profoundly impact the next few thousand.” – Sir David Attenborough

Since 1956, scientists have provided evidence of mounting anthropogenic climate change.[1] The mounting evidence tells a clear and scientifically certain story: human actions are degrading the planet’s living systems in ways that could be potentially irreversible within human time scales.

At the same time, pollutants and environmental degradation, including fishing and hunting beyond sustainable levels, have caused extinctions at an alarming rate.[2] In the ocean, keystone species from oceanic whitetip sharks—once the most abundant shark on Earth—to bluefin tuna have suffered estimated population declines ranging from 70% to 97% depending on the study and population.[3] In the global ocean, it is estimated that only 10% of the top-predator fish biomass now remains.[4]

The world’s ailing seas are in dire straits, as the time window to prevent the worst impacts of exploitation and climate change is rapidly closing. But a recent review published in Nature[5] offers a glimmer of hope. The authors conclude that “substantial recovery of the abundance, structure, and function of marine life could be achieved by 2050,” if interventions are implemented quickly and at scale. Decisions that governments, businesses, and individuals make over the next decade could stem declines in biodiversity and prevent the worst impacts of climate change. Failing to act in time could exacerbate both.

The Nature study identified four types of interventions that have a track record of success for bringing back marine life: regulation of hunting, management of fisheries, water-quality improvement, and habitat protection and restoration. As stated by the authors, this must include establishing, expanding, and improving the quality of marine protected areas. Protecting natural ecosystems is one of the simplest and most effective tools in our arsenal. Protecting enough of crucial ecosystems to maintain the life-giving services healthy oceans provide, however, requires political will.

A growing scientific consensus makes it clear that protecting at least 30% of the ocean in fully protected areas (areas where extraction—be it fishing, drilling, or mining—are forbidden) or highly protected areas (where only artisanal or subsistence fishing is permitted) is the minimum needed to give marine biodiversity a chance to thrive.[6],[7] That level of protection is needed to maintain healthy ecosystems, and by extension the services they provide, including half the oxygen we breathe, food security and more.

The pace of conservation actions, however, has lagged behind the breakneck pace of climate change and industrial exploitation. Ensuring that marine life indeed can recover by 2050, which the Nature article underscores is possible, requires accelerating ocean conservation.

While global protected area coverage remains below the level needed to maintain healthy systems, tracking coverage over time also shows tremendous progress over the past two decades. From the 1990s to date, ocean protection has accelerated almost exponentially. In 2000, less than 1% of the global ocean was protected. By 2015 that number more than tripled to 3.5% and is on track to double within a decade. Currently, 5.3% of the global ocean is protected in implemented areas, or around 7% if we count unimplemented commitments.[8]

Despite such progress, advances towards the international target of protecting 10% of the ocean by 2020 are halting at best—reaching this goal would require the implementation of protections over millions of km2 of ocean as well as the creation of additional, large new marine protected areas by year’s end.

The international community in 2010 adopted global goals for biodiversity conservation, known as the Aichi biodiversity targets for the city in which final negotiations took place. One of those targets calls for protection of 10% of coastal and marine areas by 2020. It’s a tall order for the international community given current true protection levels remain at 5.3% counting only implemented MPAs, and just above 7% if we also count committed, but unimplemented areas. The challenge of meeting existing conservation targets, however, pales in comparison to the challenge of reaching 30% of the ocean protected by this decade (which scientists insist is the minimum needed to maintain key ocean ecosystem services): almost 120 million km2 of new MPAs globally.

Scientists and the marine conservation community have rallied around the goal of protecting 30% of the ocean by 2030[9]. This ambitious target is congruent with the urgency of the ecological crises we face. If protected area coverage in the ocean continues to increase at the same rate that it has from 2015-2020, less than 15% of the ocean would be protected by 2030. Governments need to at least double the pace of marine protection to give the ocean a fighting chance.

Meeting protection targets is further complicated by the patchwork governance across most of the ocean. Currently, there is no formal process for establishing and implementing marine protected areas within the high seas, the area beyond any one nation’s jurisdiction which encompasses around 60% of the ocean (by surface area). There is hope that may change soon, if nations can agree to final text for the High Seas Treaty which has been under negotiation at the United Nations since 2018 (and required a process of over a decade longer to get to the treaty negotiation). A study published in late March 2020 identified priority areas for conservation in the high seas, and the optimal conservation solution to protect 30% of international waters[10]. Laying the groundwork for truly international MPAs, as accomplished by this study is critical to reaching adequate levels of global marine protection.

As we grapple with navigating new targets and mustering the political will required to meet them, it is worth noting that some nations have already displayed extraordinary leadership on ocean conservation. Chile in the past decade has designated 45% of its EEZ in protected areas—while much of that remains unimplemented, it’s a noteworthy commitment.

Small island nations, often resource-strapped, have led the charge to advance global ocean conservation. This year, Palau implemented its Palau National Marine Sanctuary, covering 80% of its exclusive economic zone (EEZ) in a highly protected reserve that prohibits industrial fishing. The Seychelles this year finalized a plan that sets aside 15% of its waters as no-take (fully protected) reserves and another 15% under some form of protection, nominally meeting the 30% protection target within its national waters. Niue, an island that barely covers 260 km and has a population of just over 1,600 has just passed regulations for an MPA covering 40% of its ocean jurisdiction, making it one of the largest MPAs on the planet[11]. There’s no reason larger and wealthier nations can’t follow suit with determined leadership.

Indeed, bold and determined leadership from all nations is the minimum needed to secure a livable planet for generations to come. We’ve made tremendous progress over the past 15 years in advancing marine conservation. Yet the future of the ocean still depends on leaders dramatically accelerating conservation. Protecting 30% of the ocean by 2030 requires bold and principled leadership. As Sir David Attenborough has noted, the next ten years will impact thousands of years to come. The survival of marine ecosystems, and our own, is at stake. 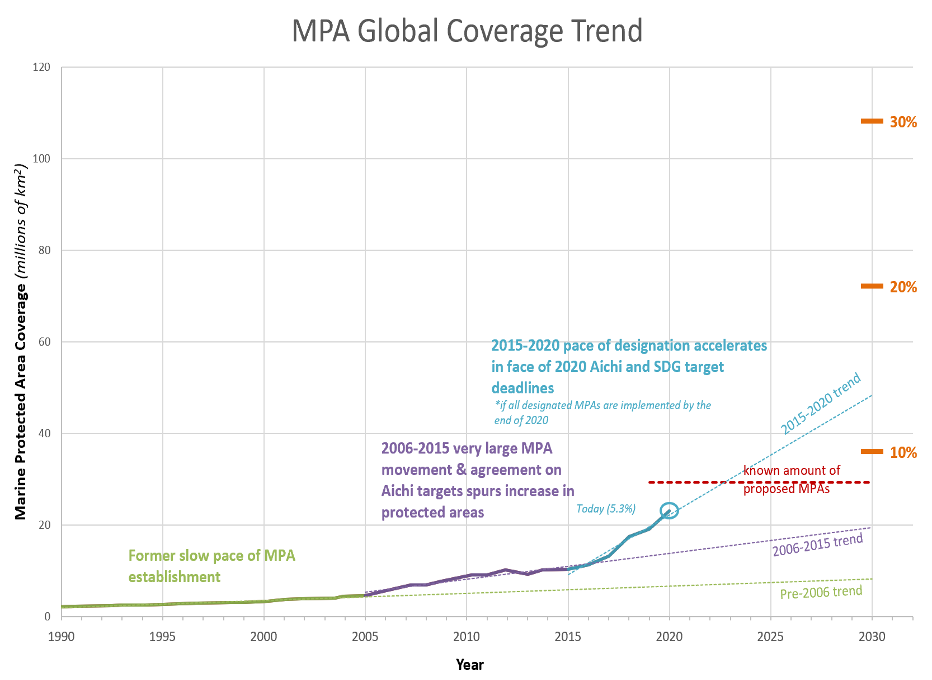 [1] Kaempffert, W. (1956) “Warmer climate on earth may be due to more carbon dioxide in the air” New York Times. Oct. 28 https://www.nytimes.com/interactive/projects/cp/climate/2015-paris-climate-talks/from-the-archives-1956-the-rising-threat-of-carbon-dioxide