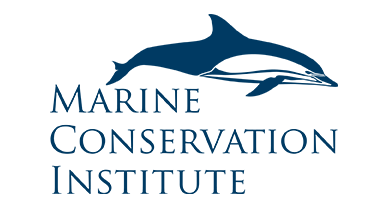 This year promises to be an interesting and exciting one for marine conservation, and we’re ready to meet its opportunities and challenges head-on for our oceans. We will continue advocating for strong protection of our oceans, strengthening our initiatives and working with you to safeguard marine biodiversity. Here’s a preview of our plans for this year. 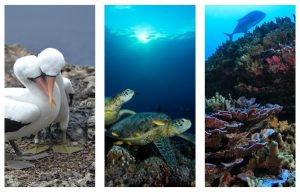 We plan to add ten new global ocean refuges in 2018. The Global Ocean Refuge System (GLORES) sets science-based standards for marine protected areas (MPAs) to incentivize effective conservation and discourage “paper parks” that have limited conservation benefits. There are over 15,000 blue parks around the world, but many allow destructive activities, like bottom trawling, or do not enforce their regulations. Now, similar to the way LEED™ certification sets sustainable building standards and provides a mark of excellence, GLORES provides a scientifically credible way to recognize effective MPAs.

We awarded three Platinum Global Ocean Refuges in 2017—Papahānaumokuākea Marine National Monument, Malpelo Fauna and Flora Sanctuary and Tubbataha Reefs Natural Park— and are thrilled to recognize more this fall. Do you know an outstanding blue park that is protecting our oceans? Nominate it for our 2018 Global Ocean Refuge Awards!

Fighting for our Marine National Monuments and coasts 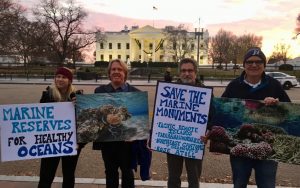 Marine Conservation Institute staff ask the President to save the Marine National Monuments.

From attacking marine national monuments and sanctuaries to pushing for expanded oil drilling in U.S. waters, the Trump administration is a threat to our blue planet. That’s why we’re working with other groups in the National Ocean Protection Coalition to raise awareness of its dangerous policies and defend public waters. Since President Trump announced drastic cuts to two Utah National Monuments, we have worked hard to show that an attack on one national monument, marine or terrestrial, is an attack on all. We’ll keep this campaign going and we’d love your help: we’re collecting signatures for a petition to the President, so please sign on and make your voice heard!

Even as the Trump administration threatens our progress in the U.S., there are signs of hope internationally. The United Nations recently began the process of creating a conservation treaty for the High Seas, which has, until now, been largely unprotected and overexploited. As an active member of the High Seas Alliance and Deep Sea Conservation Coalition, we will continue to advocate for an effective treaty and lasting protections for our oceans.

Our Marine Protection Atlas (mpatlas.org) is the most reliable resource for up-to-date global MPA information and our team is working hard to make it even better this year. No other tool shows what is proposed, what is awaiting implementation or regulation, and what is officially designated and enforced. Through critically evaluating MPA protection levels and implementation status, our team provides a nuanced view of official global MPA numbers.

The Marine Protection Atlas was featured prominently at IMPAC4 and at the Our Ocean Conference in 2017. For a compelling validation of its work, look no further than the Malta Declaration, which National Geographic Explorer-In-Residence Dr. Enric Sala and his colleagues put forward at Our Ocean. The declaration states the need for strong marine reserves and an honest accounting of protection on the water. It also cites mpatlas.org as the most reliable source for assessments of current and pending protected areas. Our team is already diving into new 2018 data and we can’t wait to share this work with the world! 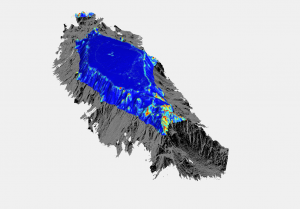 We are passionate advocates for deep-sea coral conservation because it provides many ecological benefits, but finding these living treasures can be a challenge! Our Marine Biogeographer Dr. Samuel Georgian recently coauthored a paper with leading scientists at the National Institute of Water and Atmospheric Research modeling the distributions of deep-sea corals, sea stars, and feather stars on the Louisville Seamount Chain off New Zealand. These seamounts are home to an impressive array of benthic life, and modeling the spatial distributions of these animals provides the scientific basis for identifying Vulnerable Marine Ecosystems (VMEs) and protecting them from deep-sea bottom trawling. We will continue our work to better understand the distribution of deep-sea species in order to leverage greater protection of our planet’s incredible marine life. 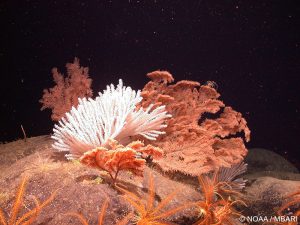 In 2016, we established the California Seamount Coalition to advance protection for the seamounts, ridges, hydrothermal vents and other deep-sea habitats off the California coast. To secure protections for these unique ecosystems, we are working with our coalition partners, including Surfrider Foundation, WILDCOAST, Mission Blue and many others, to raise awareness of the outstanding biodiversity in these areas. We are excited to continue our research on these deep-sea wonders, develop new educational and outreach materials for them, invite more partners to join the coalition, and campaign for their protection.