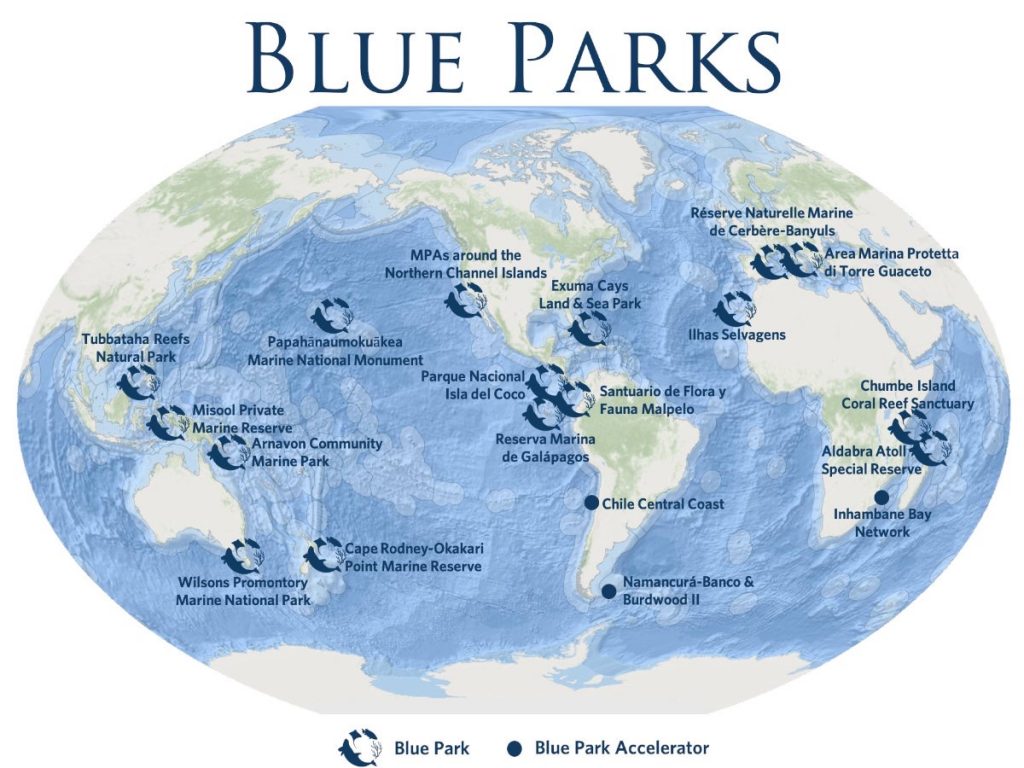 To get 2020 off to a bang we thought we would provide you with some suggestions of places that you should know more about. These are some of the very best protected areas in the ocean or areas deserving stronger protection. They all need your support. Not every place thrives with human access, and some of these are best viewed and supported from afar. Endangered species need space, but in other cases there are ample opportunities to visit responsibly and engage with the local communities. In every case we hope you will support these special places! If you do visit these places we would love for you to share your experiences with us!

Surrounded by near pristine coral reefs, the Aldabra Atoll is described as “one of the wonders of the world.” The reserve supports a huge diversity of marine life including manta rays and humpback whales, and acts as an important nesting site for green turtles.

The coastline of the park features beautiful sandy beaches, granite mountains and cliffs. The deep waters of the park are made up of colorful sponge gardens, corals and an abundance of fishes.

Cortes Bank is one of the numerous seamounts off the coast of California that Marine Conservation Institute is working to protect. Located off the coast of San Diego, it is home to a wide array of marine life including deep-sea corals and sponges, spiny lobsters, abalone, rockfish, sharks, sea turtles, and a host of marine mammals. The bank is often visited by recreational fishers, SCUBA divers, and big-wave surfers hunting for massive waves as large as 77 feet!

The diverse habitats of Cerèbe-Banyuls allows for exceptional biodiversity; over 1,000 animal species are known to live in the reserve. The reserve features seagrass meadows of Posidonia oceanica, and endemic species of the Mediterranean, which acts as a nursery for many species, including octopuses and seahorses.

The coral reef sanctuary of Chumbe Island protects incredible marine biodiversity, including an array of invertebrates, 474 recorded species of reef fish and blacktip reef sharks. The sanctuary is privately managed by Chumbe Island Coral Park Ltd., and is the perfect destination for an ecotourism vacation!

The reserve is located 800m from the north coast of New Zealand, and has been an exceptional example of conservation – the ecosystems within the protected area are healthier than those outside of it. The habitats of the reserve are highly diverse, comprising of rocky coastlines, sponge gardens and deep reefs.

The Exuma Cays Land and Sea Park contains a large population of queen conch, and is recognized as one of the only places in the Bahamas where conch density is above 50% per hectare. Along with queen conch, the park aims to promote Nassau grouper conservation.

The Galapagos Marine Reserve accounts for one of the largest biomasses of reef fish, the majority of which is made up of sharks including scalloped hammerhead, blacktip and mako sharks. The region also provides habitats to over 2,900 marine species such as penguins, marine iguanas, tropical fish and sea lions.

The massive shark aggregations in Malpelomake the sanctuary a highly sought-after spot for divers. The area is teeming with a variety of other marine species as well, including marine mammals and hundreds of species of fish.

Misool Private Marine Reserve protects a complex system of coral reefs, and is home to an abundance of endemic species such as the bamboo shark, Nursalim’s flasher wrasse, Jamal’s dottyback, Bird’s head jawfish, and Misool cardinalfish. The reserve is also a popular spot for manta ray aggregations.

Located off the coast of Southern California, the Channel Islands network protects the biodiverse waters surrounding these islands including deep sea coral gardens and giant kelp forests. The area is home to a handful of endangered species such as blue whales, white abalone, California least terns and leatherback sea turtles.

Torre Guaceto boasts some of the highest species richness in the Mediterranean. The Mediterranean coral formations in the protected area are unique structures that are home to a handful of IUCN Red Listed species.

Tubbataha Reefs Natural Park is both a marine protected area and a world-renowned scuba diving site. It is home to more than 1,200 marine species including sea grasses, corals, sharks, sea turtles, and marine mammals. Additionally, the film, Tubbataha: A National Treasure, has received international acclaim.

Burdwood Bank is an area of unique marine ecosystems that hosts cold-water corals, soft corals and sponges. It is also a feeding ground for many threatened seabirds and marine mammals.

Blue Parks partner, Fundación Rompientes, is coordinating the effort to protect coastal ecosystems in central Chile alongside the livelihoods of local communities. The management of these areas seeks to preserve the local heritage through conservation, traditional artisanal fishing, and the growing surf tourism in the region.

20. Western Aleutians – United States
The western Aleutian waters of Alaska harbor some of the richest marine ecosystems on Earth. Home to the endangered Steller sea lions, sea otters, northern fur seals, one of the world’s largest cold-water coral-sponge ecosystems, and millions of seabirds, climate change has begun to impact the area. Marine Conservation Institute identified this area as a priority in our Marine Priority Conservation Areas: Baja California to the Bering Sea Report.